Book Review: The Age Between: Personal Reflections on Youth Fiction 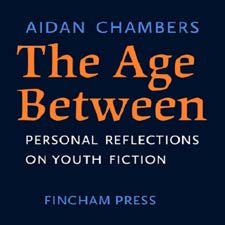 The subtitle is apt. This is a reflective book in which Aidan Chambers tells us of and rationalises his journey into becoming a full-time writer, writing mainly for the young adult, for that age between.

Yet the work is more than just a reflection. Chambers presents us with a sound definition of what the young-adult text is and who are the readers and writers of those texts. He identifies key texts, his selection demonstrating a history of the genre and recommending a canon. He also analyses his own texts, showing that they conform to the habits and etiquette he has identified.

He also demonstrates here a piece of metatext. He argues that we don’t grow so much because of our experiences rather than because of our reflection about those experiences. Writing about them is a form of reflection. In writing about what these texts do and how they are made he establishes his own rationale about writing for young people.

I used the word ‘liminal’ in my opening sentence because that is important in Chambers’ argument. The young adult exists between two ages and in many of the texts discussed, including some of his own, the protagonists and other characters are often in a liminal space for other reasons.

Chambers admits to some limitations to his arguments. He has referred only to British and American texts. He has not referred to texts written in other English-speaking countries, or to those in other languages. He highlights the lack of translated texts for young people. With some relief I note that his arguments coincide with my own and my study did include texts from other English-speaking countries and written in other languages. Chambers highlights IBBY and IRSCL (International Research Society for Children’s Literature) as offering a way forward on this.

Usefully for many of us, Chambers recognises that it isn’t only young people who read these texts. Adults other than school librarians and teachers read perhaps in order to redefine their own youth. He gives us permissions to carry on reading.

The final 30 pages are an interview of Chambers by Deborah Cogan Thacker, who has a special interest in youth literature and literary theory. They cover the topics of voice, adult character in young-adult literature, the implied reader, reader response, reading for companionship, multiple personalities, ethics, morality, responsibility, multiple points of view, preparation and research, the reader as co-author, and the connection between reading and writing.

This has all the hallmarks of an academic book: its price, the fact that it is produced by an academic press, and some sound and valid arguments demonstrated well by the texts discussed. It is also a very readable book for any adult interested in this area of literature. As one would expect of Chambers, it is well written.