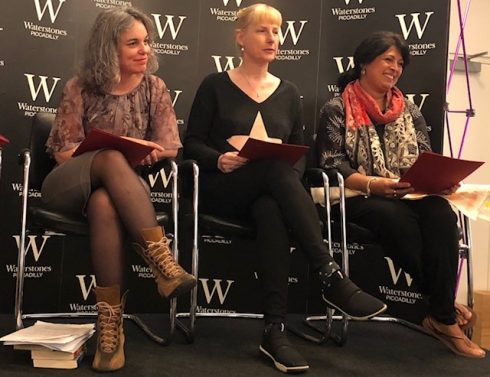 Last’s week celebration of IBBY UK’s Honour List was very special. The IBBY Honour List is a biennial selection of outstanding, recently published books, honouring writers, illustrators and translators from IBBY member countries. It is one of the many ways through which IBBY encourages international understanding through children’s literature. Each national section of IBBY nominates three books, one for writing, one for illustration and one for translation.
I was extremely privileged to be a member of the selection team for the 2018 UK list. The books toasted last week are all outstanding: for writing, Tender Earth by Sita Brahmachari (on the right in the photo); for illustration, I Am Henry Finch, illustrated by Viviane Schwarz (on the left), written by Alexis Deacon; for translation, Wildwitch Wildfire, translated by Charlotte Barslund (in the middle) from Danish, written by Lene Kaaberbol.

Charlotte translates from several Scandinavian languages, children’s, YA and adult books. She explained that she only takes a book on if she can hear it in English in her head at her first reading, and only if she ‘gets’ it in her heart, as each book takes several months to translate. It matters to her to have a good working relationship with her authors, and this was the case with Lene, a hugely popular author in Denmark. They have had many rich discussions about this first Wildwitch title and the subsequent ones in the series. Vocabulary is always a huge issue in translation. Danish, along with many other languages, has far fewer words than English. There are also cultural issues to consider: how to convey things that need no explanation to a native audience but may seem very strange to an English-speaking one. Her advice to new translators: always read as much and as widely as you possibly can in the language you are translating into, to improve your vocabulary and use of language.

Viviane was in celebratory mood, as her British citizenship had come through that day. She always drew from childhood, and had a comic published at thirteen. In her teens she was told she didn’t have a sense of humour (ironic, since humour is immensely important to her in her work, as she told us later), and she took to writing science fiction. Luckily someone advised her to be an illustrator. She trained in the UK as her native Germany had no suitable courses and was quickly published. She and Alexis Deacon have worked together on a number of books, in particular ‘books about small animals that explore big ideas’. It was she who suggested a finch as the protagonist for I Am Henry Finch. She loved depicting Henry’s development into a self-aware and philosophical little bird. The book remains one of her favourites, along with her Tiny Cat books. She gains a huge amount of ideas and inspiration from her creative workshops with children. She never aspired to be best at drawing, caring much more that children see that they too can be artists.

Sita told us that she hadn’t intended to write a third book about the artichoke charm that first appeared in Artichoke Hearts and was given away to a poor child in India at the end of Jasmine Skies, although children told her they didn’t like the story ending there. Several books later though, she returned to the theme. The first draft of all her books is very abstract and fairly incomprehensible. She and her editor then work together, something that suits Sita, with her collaborative theatre background. All her books draw on real world issues such as poverty and hunger. ‘We writers taste the news’ she said. Authenticity, integrity and respect are crucial to her and she does a great deal of research, for instance about bat-mizvahs for Tender Earth. It was a very emotional book to write because Simon, one of the characters, was based on a friend of hers who died. She is passionate about children having access to inclusive books, and appalled by the decline in school and public library provision. 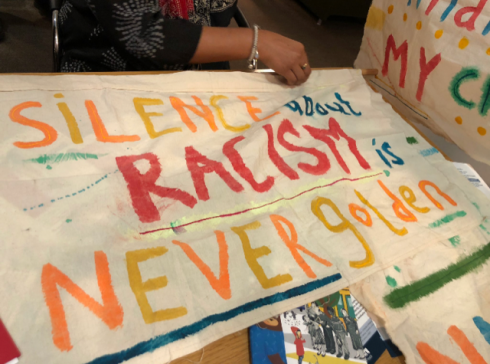 Many thanks to Chitra Soundar for this photo of Sita with one of Laila’s banners from Tender Earth.

A fascinating evening. And good news at the end that the IBBY UK nominations for the prestigious Hans Christian Andersen award for 2019 are John Agard for writing and Helen Oxenbury for illustration. Two giants in the children’s book world!

Original piece and photos from blog www.anneharding.net by Anne Harding.