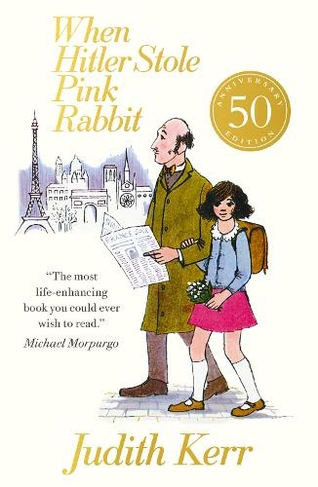 2021 marks 50 years since the publication of the first volume of Judith Kerr’s fictionalised autobiography, Out of the Hitler Time.

HarperCollins is celebrating this anniversary with a beautiful, gold-embossed hardback edition of When Hitler Stole Pink Rabbit, complete with Kerr’s original line drawings and a note from the late author-illustrator describing her family’s final winter in Berlin in 1932/33, the political reasons for their forced migration and the process of writing the novel so many years after her family’s flight from Nazi Germany and their attempts to seek refuge in Switzerland, then France, and, finally, the UK.

Many IBBY UK members will know that Kerr decided to write the trilogy after taking her children to see The Sound of Music at the end of which her son declared that he now knew what his mummy’s childhood had been like. At that time, there was very little fiction available about the experience of refugee children from Nazi Germany. When Hitler Stole Pink Rabbit was, in fact, one of the first pieces of literature to give voice to this chapter of history from a child’s perspective.[1]

But Kerr’s starting point for writing and illustrating this novel can actually be traced to a much earlier date. My doctoral research on the Judith Kerr Collection at the Seven Stories archive and her father’s archive at the Academy of Arts in Berlin has found that Kerr began forming literary and creative responses to her childhood as a girl in Berlin. There are even references to some of the juvenilia in the novel. The disaster poems that Anna composes in Berlin refer to real ones Kerr wrote and illustrated for her parents in a book she gave to her parents for Christmas in 1932, the last Christmas they celebrated together in Berlin. Just a few months later, this book was among the items Kerr’s mother considered most important to save. In exile, Kerr continued to write and draw in this book, charting life in her new home countries.

The preservation of this book and other juvenilia means that we can understand Judith Kerr’s childhood not just as it was remembered and fictionalised by Kerr for her children in the 1970s, but also how she communicated it as a girl in the 1930s.

This, to me, is what makes the novel particularly special.

While the poetry is unpublished, some of Kerr’s childhood drawings and pages from her other childhood writings can be viewed on the Seven Stories and British Library websites and in several print publications, among them Judith Kerr’s Creatures (2013) and Joanna Carey’s beautiful contribution to the Thames & Hudson Illustrators series.[2] I would very highly recommend pairing reading the novel with these juvenilia.

[1] See Anthony Grenville’s laudatio for the award of honorary membership to the Gesellschaft für Exilforschung (Society of Exile Studies) to Judith Kerr in 2019: https://wienerholocaustlibrary.org/2019/03/26/374/.
[2] https://www.sevenstories.org.uk/collection/collection-highlights/judith-kerr
https://www.bl.uk/collection-items/childhood-drawings-by-judith-kerr