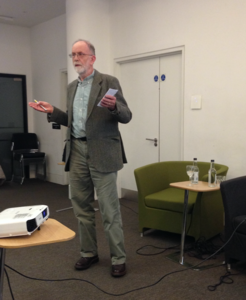 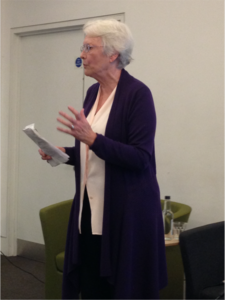 Elizabeth Laird
Can children’s books inspire empathy and move people to action? The answer from the Waterstones’ audience last Thursday was… a hopeful yes. Book lovers, activists, teachers, authors and publishers had all gathered at Waterstones Piccadilly to talk about Elizabeth Laird’s latest book Welcome to Nowhere.
David McDowall introduced the event with an informative talk on the history of the Middle East, from the Ottoman Empire through to the fragmentation of the region post-WW1. He discussed the devastation caused by carving a continent into superficial borders. Borders that created barriers and conflict in the rich, complex social and historical backgrounds of its people. From the French invasion in 1924 to independence in 1946, through to the coup d’etat instigated by the Americans to Hafez Al-Assad’s 1970s dictatorship, the people of Syria had already been through many years of turmoil and social unrest. With further complexities such as drought and mass migration to the cities, the road to civil war was set – and we all know of the heart-breaking consequences thereafter.

Elizabeth Laird talked of her own experience of war – in Beirut during the Lebanese civil war and in Palestine. Despite her extensive time in the Middle East, she questioned her right to write from another’s culture and perspective. This is a debate that often rears its head within the world of children’s literature. It’s a complex issue but Elizabeth raised an important point – with so little work translated into English and with so much left to achieve in the realm of equity in children’s publishing, stories that offer a different perspective are crying out to be told. With the bombardment of news footage and the portrayal of asylum seekers and refugees in the newspapers, a different perspective must be told. And that’s what Welcome to Nowhere does – it brings back humanity to the people in the news and gives us a moment to reflect and empathise with what so many families are going through.

The book tells the story of Omar and his family – a normal family living in Bosra whose lives are shattered by the civil war that has devastated Syria. Omar is a ‘likely lad’ – entrepreneurial, funny, brave, at times selfish and grumpy – but his world is turned upside down when he is forced to leave his home. Omar and his family manage to escape Syria but the question Laird asks of the reader is this: Will people people welcome them? Will they be accepted in their new schools? Will they be helped to settle in and follow their dreams? The answer to those questions lies with you.

This is the power of books: they give you the space to empathise, to understand and perhaps…to act.

Welcome to Nowhere was hugely informed by Elizabeth Laird’s time spent working with teachers in a refugee camp in Jordan. The characters and places come from real lives and experiences. To support education for traumatised Syrian and Iraqi refugee children, please visit www.mandalatrust.org.