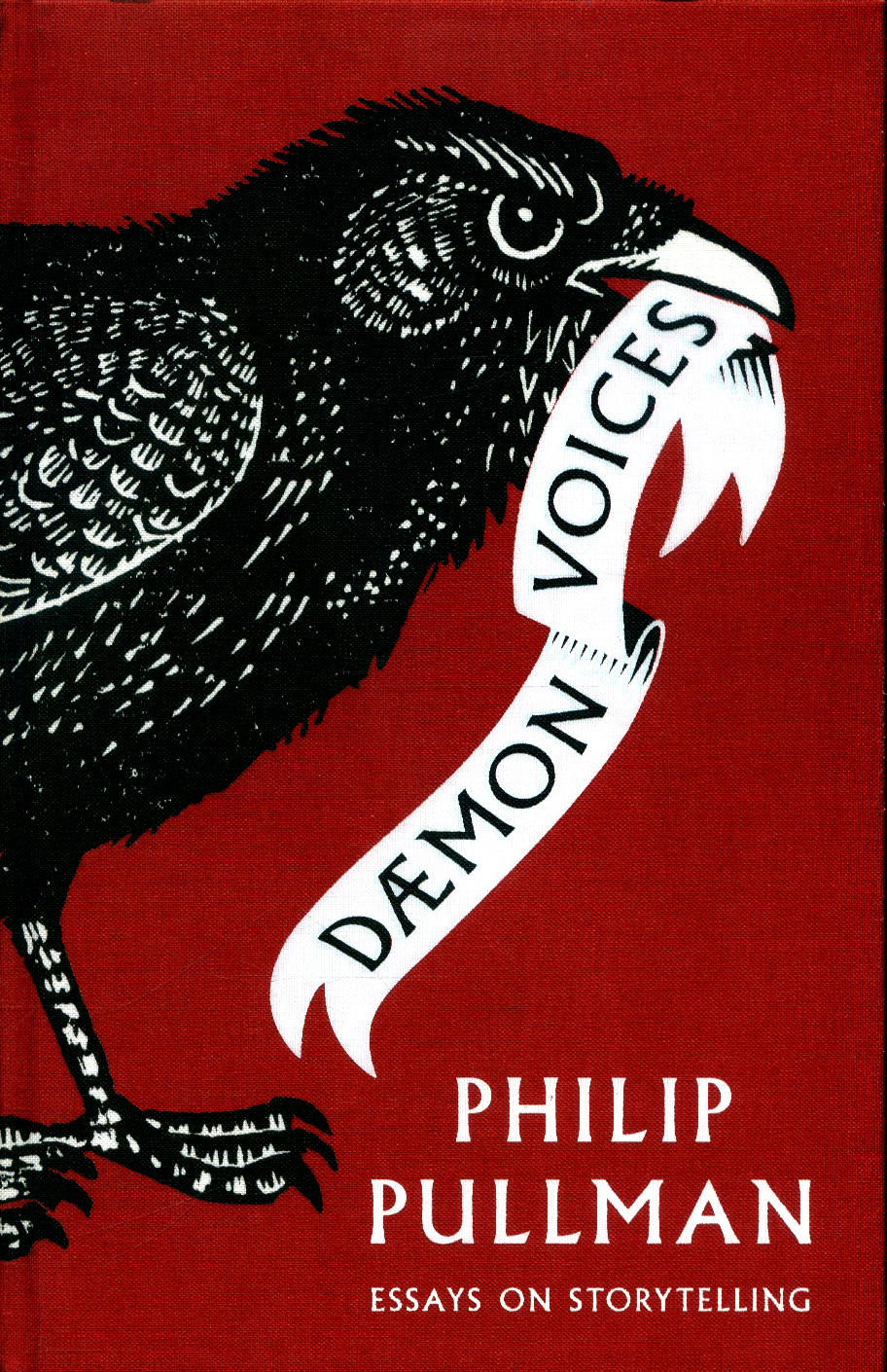 In Philip Pullman’s recent collection of essays on storytelling, Daemon Voices {2017), discussing the challenge of ‘Writing Fantasy Realistically’, and the differences between the literary realism of a writer like George Eliot and the pure high fantasy of Tolkien, he concludes that

The more profound and powerful the imagination, the closer to reality are the forms it dreams up. Not the most unlike real things, but the most like.

He’s comparing the psychological realism, the ‘moral truthfulness’, and believability of the characters in Middlemarch (1871–1872), as opposed to some of the more archetypal figures drawn from the traditions of sagas and myths which Tolkien deployed. It explains in part why Pullman laboured for seven years creating the characters and world of His Dark Materials trilogy so that a story of witches, talking bears and tiny spies on dragonflies could exploit the same psychological realism as a big Victorian novel.

In Pullman’s eyes, the creation of epic, magical fantasy only ‘matters’ or ‘has value’ when it is a vehicle for truthful, meaningful revelation about our own, real world. Our demands of great fiction are not just entertainment or escapism, on however grand a scale those are provided, but also satisfactory insight and revelation into our daily life, which, for most readers, generally features fewer witches or talking bears than we might like.

There’s a different revelation that high fantasy can offer, of course, and that’s the timeless and profound sense of being part of a shared human story that stretches over many epochs and cultures, but with so many central hopes, desires, fears and rituals in common. Legends and epics tend to more everyman characters and, in doing so, deliver the literary consolation of essaying universal dilemmas – quests for meaning, rituals of sacrifice and redemption – rather than nuanced, psychological examinations of contemporary mores.

I agree with Pullman that the most important quality in fiction, whatever the genre, is a sense of truthfulness. The reader must suspend disbelief, otherwise they are simply comprehending a written text, and not meaningfully experiencing it in their imagination – with the subsequent emotional revelation or catharsis. Whether the character is a dragon from an alien planet beginning their conquest of Earth or a child on their first day at a new school, unless they think, act and speak with a degree of consistency, in comprehensible ways and in accordance with the established rules of their imagined world, not to mention the laws of physics – the reader will start to have doubts, and that is the kind of thread pulling which can unravel the most tightly knitted of tales.

Legends and epics tend to more everyman characters and, in doing so, deliver the literary consolation of essaying universal dilemmas – quests for meaning, rituals of sacrifice and redemption – rather than nuanced, psychological examinations of contemporary mores.
But I would go further. For, after all, as Pullman admits, Dorothea is no more ‘real’ than Frodo Baggins, we can no more actually travel to Middlemarch than we can Mount Doom. All fiction is fantasy; it’s just that some choose to exercise their imaginations more liberally and extravagantly than others. Yet more than that, we are overlooking one fundamental point. That for young children – certainly those younger than perhaps the readers who might get the most out of either Tolkien or Pullman (not to mention George Eliot), for those readers’ imaginations, there is already limitless magic in reality itself. In her still authoritative guide to early twentieth-century children’s literature, Intent Upon Reading (1961), Margery Fisher wrote:

The very simple dramatizing of a child’s experience, through an animal or toy that comes to life, though it is technically fantastic, can be very near to fact, because the child takes it literally. A four-year-old has only to tie a bonnet onto a kitten and force it into a pram, to make it, instantly, a baby. To this child, there is nothing out of the way in Mrs Tiggy Winkle wearing an apron and wielding a flat iron. … Fantasy for young children is best if it is a matter of one simple incident which, for a time, enlarges and irradiates the everyday world.

Setting aside Fisher’s notions of what four year olds should or shouldn’t be doing with their kittens, there is a vital enduring truth here about reading, imagination and the value of stories. It’s one that can get lost in all the heat and noise over the many different, often intersecting, genres and age groups that now make up our richly complex and diverse canon of children’s literature.

As children grow and develop, and apprehend the real world by degrees, let us not diminish the sense of wonder with which they first encounter what will later become commonplace, whether it is holding an insect for the first time in the palm of their hand, opening their eyes underwater, or travelling at speed. For what is magic after all, as Fisher says, but ‘fear and wonder’? The wonder that the humble, domestic wardrobe, standing in the corner of your bedroom might be the portal to a whole new dimension. The fear of what might, or might not, be living under your bed.

Fairy tales still exert their power today, especially for young children, because they are not stories about either a completely imagined (and therefore potentially taxing to read and reimagine in a growing mind) world or a remote land of mature emotions and grown-up problems. There are so many tales which cast the most mundane domestic objects in a sinister or marvellous new light – turnips which bring misfortune down upon a family, a cursed iron stove, a magic self-cooking porridge, and, of course, every possible kind of farmyard animal blessed with every kind of enchantment.

To sit down at home and read the complete Grimm’s Fairy Tales (1948),after an hour or two, is to invoke a hallucinatory perception of one’s own living space. If I don’t listen to that bird tapping at the window, will I lose my money? What if those shoes on the floor began to dance? And if I open that small bottle, what supernatural force might I unleash?

There are so many tales which cast the most mundane domestic objects in a sinister or marvellous new light.
As Anil Seth, Professor of Cognitive and Computational Neuroscience at Sussex University, explains in his TED talk ‘How you Hallucinate your Conscious Reality’ (24/9/2017), this isn’t so far from the truth.

Our brains, trapped inside our skulls, are to all intents and purposes as blind as moles under the ground. They rely on signals from our eyes, hands, internal organs to create a picture of the outside ‘real’ world. Seth argues this picture is created by billions of neurons ‘hallucinating’ and that it is ‘only when we agree about our hallucinations that we call it reality.’

So, it turns out that reality is already pretty magic.

Adults are all too good at forgetting this. Children less so. A kitten becomes a baby, a torch shone under a duvet makes a spaceship, and the great wars between Lego figures and soft toys acted out on the kitchen floor are as deadly serious as any real- world military campaign to the child mind directing them.

And when we read, adult or child, those same billions of neurons are hard at work creating a different kind of hallucination in our head, hallucinations on which we rarely agree, such is the uniquely private and individual experience of reading. We all read about Lucy going into the wardrobe, but every one of us sees a different Lucy and a different wardrobe. Yet at the same time, we feel we’ve experienced the same thing, and that shared experience, along with thousands of others, is part of the cultural glue which binds us together, and makes acts of real-life magic possible.

As a child, I wanted to know if there were carpet bags in real life as infinitely capacious or magical as Mary Poppins’, because whilst I had to accept the laws of physics which made this an unlikely prospect, my brain drew less of a distinction between the experienced real world so unfamiliar, and the magical ones I so often fell asleep to every night. I strongly felt – and in a way, still do – that if you could write a story about it, then somehow, somewhere, it might be true. That is the compulsive power of the imagination, the restless curiosity it ignites.

Then when the search for a magic carpet bag that never gets full is overtaken by a search for a plastic bottle that doesn’t pollute the ocean, or when knocking on wardrobe back walls in search of Narnia leads to knocking on doorsteps to solicit support for a better real world, or that realising the kindness extended to an abandoned talking bear at Paddington Station might also apply to others equally abandoned visitors from other countries – it turns out that Gandalf does not always need to wield the white light of Glamdring to drive away the forces of darkness.

The magic of reality is that, unlike fictional characters, trapped by their manipulative authors, we do – with effort and collaboration – have the means to shape elements of it for the better. The magic of reading is that it, through fables of fear and wonder rooted in everyday experience, piques on the imagination to deeper levels of profundity and power. And the greater they are, to paraphrase Philip Pullman, the closer to magic are the forms of reality they dream up.

Piers Torday was born in Northumberland and educated at Eton and Oxford. He worked as a theatre and TV producer, before deciding to tell some stories of his own. His books include The Last Wild trilogy (2013, 2014, 2015) (Guardian Children’s Fiction Prize 2014 for The Last Wild) and There May Be a Castle (2016). He has adapted John Masefield’s The Box of Delights for the stage and his latest book is The Lost Magician (2018).