The Garden of Inside-Outside 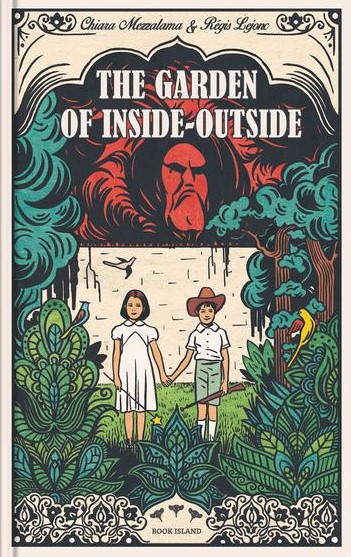 Chiara Mezzalama situates her autobiographical text within the aftermath of the atrocities of the Iranian hostage crisis of 1979, shortly after which her father was appointed as Italy’s ambassador to Iran.

The book is layered with the idea that there is a clear distinction between the safety of ‘inside’ the confines of the Italian Embassy compound, where she and her brother live, play and explore, and the dangers associated with ‘outside’ the compound. Young Chiara invents a fantasy world, peppered with princes and princesses, emperors and enchantresses, based on her naïve understanding of the wider world, with its ‘city-monster’ and its signs of civil unrest.

This division is further reflected on the use of colour and imagery throughout the book, with the gardens inside the Embassy walls presented overwhelmingly in rich greens, while the streets of Tehran are coloured in a variety of violent red tones.

Only later, as the girl’s thoughts turn to more adventurous possibilities beyond the Embassy walls, the dark and dangerous reds begin to seep through into the verdant green palette of the safe space. Chiara makes friends with Massoud, a boy from the streets of Tehran, who nimbly scales the compound walls and finds his way into the gardens. Their friendship transcends any language barriers but also begins to break down the protective sanctity that has thus far kept Chiara and her brother safe.

Slowly, as the friendship between Chiara and Massoud deepens, their two worlds begin to merge. Chiara’s feelings become complicated by her desire to be with her friend, and her anger against her brother’s continuing contentment inside the Embassy walls and her mother’s intransigence. She feels frustrated, locked, as she puts it, ‘as if in a golden prison.’ Chiara is desperate to experience more and to feel free.

More than a story of childhood fantasy, this book provides a powerful treatise on civil war and its impact on young lives, on both sides of any political conflict. It raises interesting philosophical thoughts for readers of all ages on the futility of war and the power of friendship to overcome political, cultural and physical barriers.