The Chronicles of Will Ryde and Awa Maryam Al-Jameel: A Tudor Turk (Book One) 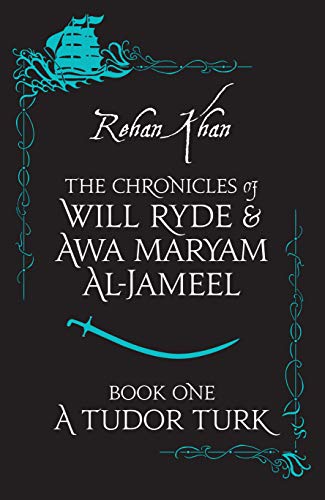 It is 1591, Will, kidnapped as a child by pirates and enslaved, suddenly finds himself free and in the service of the Sultan Murad III.

Recruited into an elite band of warriors, his task is to rescue the Staff of Moses which has been stolen. It has enormous symbolic and magical importance – and the Sultan wants it back. Will finds his partner in the quest is Awa daughter of a West African king and a redoubtable fighter. Together they will travel across the Ottoman Empire to find themselves in the London of Queen Elizabeth I. But the Staff is desired by many – how can they succeed?

Here in this action-packed narrative, East meets West as our two unlikely allies run the gauntlet of thieves, assassins, – and even the Queen herself, as they range across the Mediterranean world from Istanbul to London. History is dealt with lightly – background relayed through dialogue rather than extended paragraphs so the story moves at a brisk pace and the pages turn. However, the speech itself is firmly contemporary. The author’s aim to engage his young audience immediately and ensure that believe is easily suspended as they join Will and Awa on their quest. This is a traditional adventure story that happens to be set in the past – a colourful and diverse past – that can be thoroughly enjoyed by confident readers who are looking for action and feisty characters with whom they can identify and join in their imagination.