The Adventures of Anatole 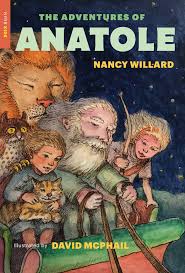 Nancy Willard’s trilogy which narrates the adventures of a boy and his orange cat Plumpet, now in one volume.

Nancy Willard (1936-2017) was a distinguished American novelist, poet and illustrator of children’s books. She won the 1982 John Newbery Medal for her children’s picture book A Visit to William Blake’s Inn: Poems for Innocent and Experienced Travellers (1981). The Adventures of Anatole (2018), the omnibus edition of Willard’s trilogy of fantasy tales, Sailing to Cythera, The Island of the Grass King and Uncle Terrible plus two extra, has the ingredients that one might expect from this author who had two ways of looking at the world: the purely factual, the other purely magical.

Whether kind-hearted Anatole and his talking ginger cat, Plumpet, take a ghostly trip on The Gospel Train or Anatole helps a soldier to regain his memory in The Wise Soldier of Sellebak, Willard makes the extraordinary seem perfectly natural.

Her inventiveness and humour are sometimes reminiscent of Lewis Carroll’s Alice but here the real world and the magical blend effortlessly. In Sailing to Cythera, Anatole enters the magic portal on his Grandmother’s wallpaper while in The Island of the Grass King he goes on a perilous journey in search of Mother Weather-sky’s garden, free the King of the Grass held captive and ask for a sprig of the wild fennel that he grew in his crown. This is so that Anatole’s asthmatic Grandmother can have her fennel tea that she would much prefer to take than use the inhaler the doctor had prescribed.

David McPhail’s detailed and sometimes surreal pen-and-ink illustrations complement the stories perfectly particularly those for Uncle Terrible in which Anatole frees his uncle from a wizard’s spell.