Illustrating Lewis Carroll and James Joyce: An Exhibition of the Work of John Vernon Lord 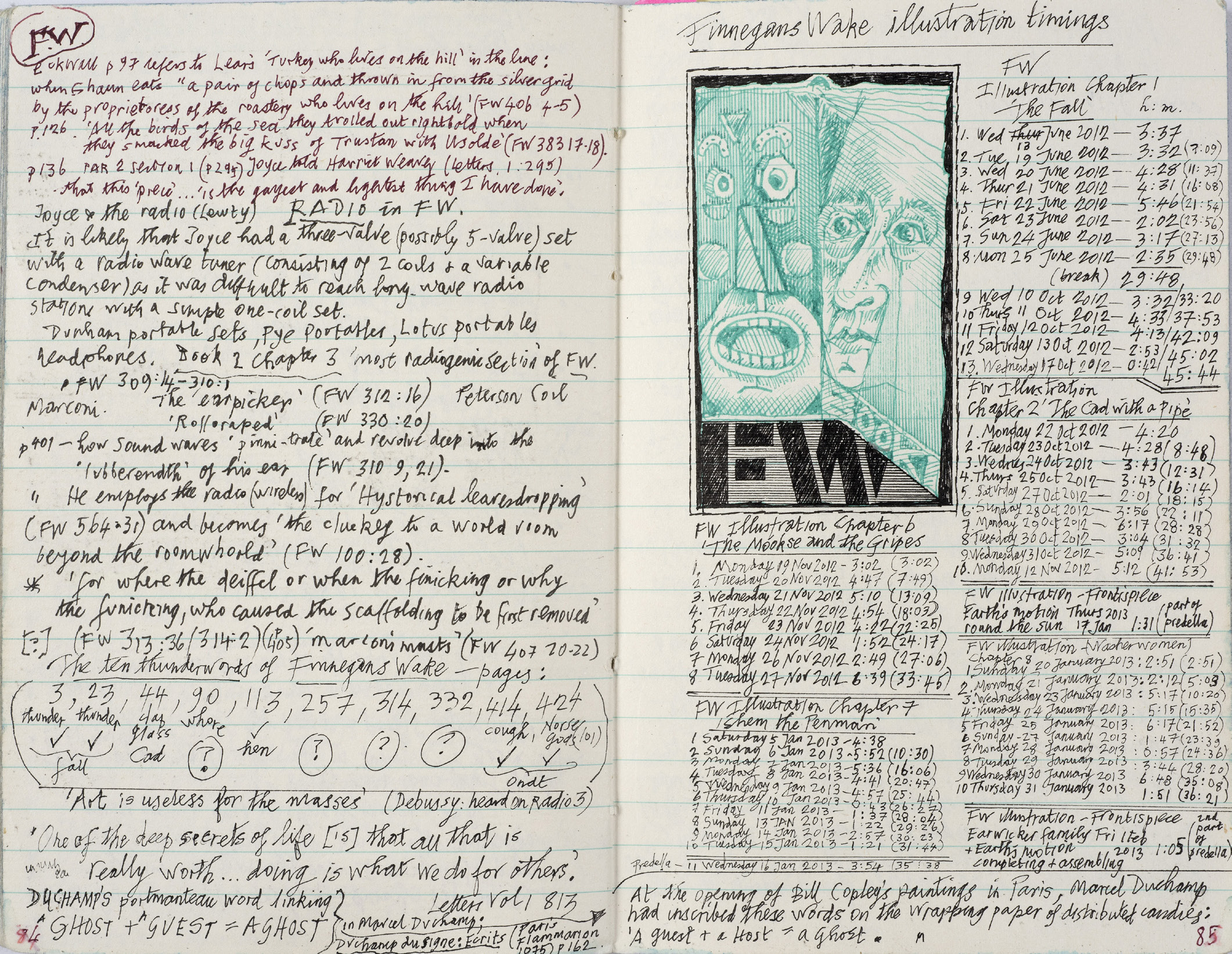 John Vernon Lord: Illustrating Carol and Joyce was on at House of Illustration, King’s Cross, London, from 13 July to 4 November 2018.

John Vernon Lord (b. 1939), illustrator, author and teacher, was earlier this year named Moira Gemmill Illustrator of the Year 2018 at the Victoria and Albert Museum, and this well–mounted exhibition of illustration, ‘about a hunt, three dreams, and a day in Dublin’ at House of Illustration features some of the original artwork that Lord produced for five books along with his many notebooks and previously unpublished material. One wall is covered with tiny pen and ink drawings on paper entitled ‘A Drawing a Day, carried out in 2016 “for the fun of drawing”’.

Uniquely, in Lord’s illustrations for Carroll’s Alice books, Alice herself is very conspicuous by her absence, although she does feature at the end of her dream in Alice’s Adventures in Wonderland (2009) and at the beginning of her dream in Through the Looking–Glass and What Alice Found There (2011) when she steps through the mirror.

For Wonderland, Lord’s depiction on display of The Rabbit Hole ‘filled with cupboards and book–shelves’, in pen, ink and watercolour on paper, has a vertiginous perspective and one that the artist would use again very effectively in his illustrations for The Hunting of the Snark (2006) and Finnegans Wake (2014). At the end of her fall down the rabbit hole, Alice lands on a ‘Heap of Sticks’, arranged in Lord’s pen, ink and watercolour illustration ‘so that they loosely depict Australia and New Zealand to illustrate Alice’s fear that she might “fall right through the earth” … to the “antipathies” which is a pun on antipodes’.

Lord’s etching with watercolour on paper of ‘The Hatter, Hare and Dormouse’, the heads of the Hatter, whose face and bow tie are in blue, and Hare filling half of the picture area, has the quote in capital letters ‘IT’S VERY EASY TO TAKE MORE THAN NOTHING’. The Hatter’s eyes are fixedly focused, we might assume, on Alice, to whom he has spoken these words. These illustrations are brilliantly executed but I was disappointed not to see displayed Lord’s particularly energetic and claustrophobic illustration of the cook going berserk in the kitchen in ‘Pig and Pepper’.

For Looking–Glass, a narrative ‘full of wordplay’, Lord’s quirky Humpty Dumpty, who would appear again in a tinier version of the illustration for Finnegans Wake, is drawn in pen, ink and watercolour. He sports a red and black check outfit and lime green cravat, his arms outspread and his hands overlapping beyond the picture on either side. This overlapping is used in many of Lord’s illustrations and, particularly in Alice, often has the effect of suggesting the energetic liveliness of a character that refuses to be confined.

Also for Looking–Glass, in pen, ink and watercolour, the fight between the Red Knight and the White Knight is a tangle of arms, legs and weapons as they tumble to the ground, this tangle echoing that of the branches above them in the wood. A smaller picture, in pen, ink, watercolour and collage on paper, of the bowing leg of mutton, to whom Alice has just been introduced, is beautifully observed, a piece of white paper or card having been applied to represent the joint of mutton’s decorative frill.

On display also are Lord’s superbly detailed pen and ink on paper drawings for The Hunting of the Snark, Carroll’s dark, nonsense poem (1876), about the ‘quest of nine men and a beaver in search of a mysterious creature called a “snark”’. One illustration in particular stands out, that in which ‘The Baker plunges into the chasm’ with the artist again using a Surreal perspective and meticulous draughtsmanship.

Lord’s intention of ‘casting light on the text’ (Folio Society website link, see below) succeeds brilliantly, and all his illustrations give the text extra focus.

Ulysses (1922) and Finnegans Wake (1939) are James Joyce’s Modernist, stream–of–consciousness novels set in Dublin. For Lord’s illustrated editions, both published by the Folio Society, the artist selected elements from each novel and, with pen ink and collage on paper, neatly contained them within squares and rectangles.

Ulysses revolves around three characters, Stephen, Leopold and Molly, and for one fine illustration on display, in tones of green and grey, Lord depicts Leopold’s ‘internal monologue’ as he walks the streets of Dublin. We see a profile, occupying two thirds of the picture area, of Stephen’s head, wearing his ‘Latin quarter hat’. Two sensorial beams, one issuing from his eye and the other from his ear, represent the sights seen and the sounds heard, perhaps unconsciously, during his walk. A silhouette of Stephen’s hatted, walking figure with ‘ashplant’ walking stick, shows him with head down, preoccupied. That Leopold is also preoccupied is incorporated into the overall design: a passage of text seen through a magnifying–glass, waves breaking on the shore, Neptune and his trident, and a gallery of faces including Shakespeare and Homer. Lord’s intention of ‘casting light on the text’ (Folio Society website link, see below) succeeds brilliantly, and all his illustrations give the text extra focus.

Linguistically innovative and often humorous and lyrical, Finnegans Wake, with its interwoven themes of the cultural and political history of Ireland was to be Joyce’s final work. The ‘Finnegan’ of the book’s title, Lord explains in his illustration note, ‘is the name of an Irish hod carrier in an old vaudeville song, who falls to his death from a ladder while drunk’.

Finnegan’s fall is skilfully reflected and executed in Lord’s pen, ink and collage on paper illustration. Surreal is the vertiginous perspective from which the viewer is looking, from the top of the ladder from which Finnegan has just fallen and is plunging to the ground below. Finnegan is not alone in his fall: there too is Humpty Dumpty, of the nursery rhyme and Alice, taking his own tumble from the same wall. Buckets, trowel and brick hod, that Finnegan has been using to repair the wall, and bottles of liquor, the cause of his fall, are following in his wake. Despite the small rainbow at the top of the picture, a snake, or the biblical serpent, undulates its way near the bottom with a symbolic apple of temptation close by. Appearing below this main image, the map of Dublin Bay and its coastline provides a realistic touch and a firm setting for the fluidity of the text.

For more information about Lord’s work, his book Drawn to Drawing – 50 Years of Illustrating (2013) is invaluable for it shows the sheer inventiveness and versatility of this most gifted of artists.

Some illustrations for the books can be viewed online. From Ulysses (2017) https://www.creativeboom.com/inspiration/john–vernon–lord–named–illustrator–of–the–year–at–the–va–illustration–awards–2018/; from Alice’s Adventures in Wonderland (2009), Through the Looking Glass (2011) and Drawn to Drawing (2013) at http://www.illustrationcupboard.com/artist.aspx?aId=283&page=0; from Finnegans Wake (2014) at https://www.brainpickings.org/2014/03/27/folio–society–finnegans–wake–john–vernon–lord/.

–– (1871) (illus. John Tenniel) Through the Looking–Glass and What Alice Found There. London: Macmillan.

–– (2011) (illus. John Vernon Lord) Through the Looking–Glass and What Alice Found There. Oxford: Artists’ Choice Editions.