The Versatility of Sylvia Weve 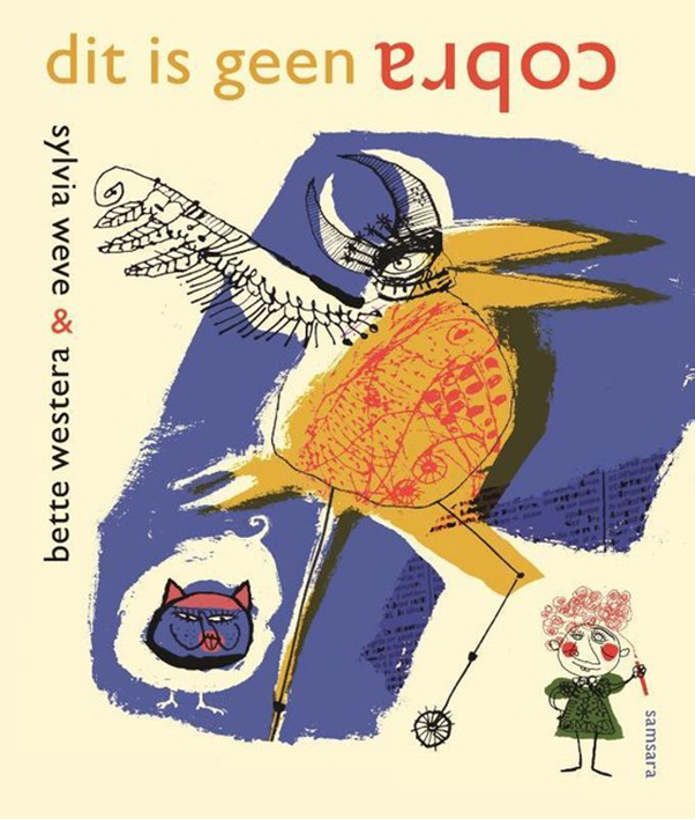 This HCAA nominee spotlight is courtesy of Gilang Wicaksono and Herdiana Hakim, in partnership with Evelyn Arizpe and the Erasmus Mundus programme, the International Master’s in Children’s Literature, Media and Culture (IMCLMC).

For Sylvia Weve, life is about drawing. Whether with a felt-tip pen, paintbrush, or digital software – or sometimes combining them – the Dutch artist has been a consistent force in the children’s book world in the Netherlands.

“Drawing is in my genes.”

Born in 1954 in Utrecht, a Dutch city famous for its historic mediaeval buildings and canal wharfs, Sylvia Weve found drawing when she was still very little, and knew that it would be her life calling. She was quoted in Bookbird: “As a child I already knew: I will become an illustrator when I’m older.” And she followed that calling. After graduating from graphic design in an art academy in Arnhem, Weve got her first project: illustrating the children’s section of the Dutch magazine Vrij Nederland. Not long after, her breakthrough came: a project for a picturebook written by Corrier Hafkamp, published in 1980 with the title Een noom op school (A Gnome in School). Her humorous and eccentric illustration seemed to reveal how her creative mind worked, which also became a sign for her long career.

Since then, Weve has consistently created and produced more than 200 children’s books. She collaborated with various authors, and also created her own stories: Kip en ei (Chicken and Egg, 2006) and Logboek van tot nu toe onbekende dieren (Log of Hitherto Unknown Animals, 2018). However, it is her frequent collaboration with children’s author Bette Westera that has turned them into a dynamic duo with a handful of awards.

In 2013, their picturebook Aan de kant, ik ben je oma niet! (Step Aside, I am Not Your Grandma!) earned Weve the Gouden Penseel (Golden Paintbrush). Weve and Westera won the prestigious Woutertje Pieterse Award twice, first for Doodgewon (Dead Normal) in 2015 and Uit Elkaar (Separation) in 2020. By herself, Weve has garnered accolades for her entire oeuvre of works, from the Prof. Pi Award by the Amsterdam Foundation for the Arts to the Max Velthuijs Prize. The latter is a triennial award held in the Children’s Book Museum in The Hague, and Weve, the latest receiver for her works, was praised by the jury as: “humorous, poetic or a bit surreal” (Lenteren 2019).

Versatile is a word that may best describe Sylvia Weve’s illustrations. As an artist, she has had to adjust her style to the story of a given author and to create unique works that call for just a little bit more interpretation from the readers. As such, we can see her illustrations in books with varying themes from separation and grief to fables and fantasy.

Let’s have a closer look at some of Weve’s works. One work worthy of mention is Weve’s collaboration with Bette Westera, Dis is geen cobra – also available in English as This is not a Cobra. Published in 2019, the picturebook tells the story of a child’s attempt at painting an animal of her own. Weve’s style perfectly matches the child’s non-conformist drawings with mismatched colours spilling from the rigid constraints of sketched lines, creating an abstract look that pairs well with the story.

This style also extends to her other collaborations with Westera. Works such as Uit Elkaar, Was de aarde vroeger plat? (Was the earth flat before? 2017) and Aan de kant, ik ben je oma niet! demonstrate the distinctive abstract style we see in This Is Not a Cobra. Interestingly, a more restrained version of this style can be found in Logboek van tot nu toe onbekende dieren and the fable Haasje Repje (Hurry Hare, 2015) and Ra, ra, wie ben ik? (Ra, ra, Who Am I? 2004), which maintain Weve’s bold lines without the overflowing colours of the aforementioned works.

Weve’s adaptability as an artist is reflected in Jawlensky – Haar ogen (Jawlensky – Her Eyes, 2019), an art fantasy based on the life and works of Russian-German painter Alexej von Jawlensky. The book is based on his view of arts and is an effort to present reality through his eyes. To do so, Weve adapted her style to Jawlensky’s, creating one that is reminiscent of both artists. For instance, readers can see traces of her style in the way she drew the lines of her character’s facial features and how she incorporated Jawlensky’s colours in her pages.

Last but not least, we have to look at Weve’s other collaborative work with Westera, Doodgewoon, a collection of poems which deal with the theme of death. Weve aptly matched her illustrations to the tone of each poem, painting soft, pastel lines in one spread and blocky colours in another. She was reportedly proud of the book as it managed to tackle a difficult subject in a respectful manner.

She credited her influence to Ingrid Godon, a Flemish artist who has illustrated many children’s books and has been nominated several times for the Astrid Lindgren Memorial Award. In a way, they seem to share a distinctive flair in their works. Like Godon, Weve creates not only children’s books but also art works for other media, such as magazines and newspapers, television, and theatre. Her creations have also been exhibited in various galleries around the world. Nevertheless, her name will always be a legend in children’s book illustrations, mostly due to her tenacity, recognitions, and contribution to children’s book arts.