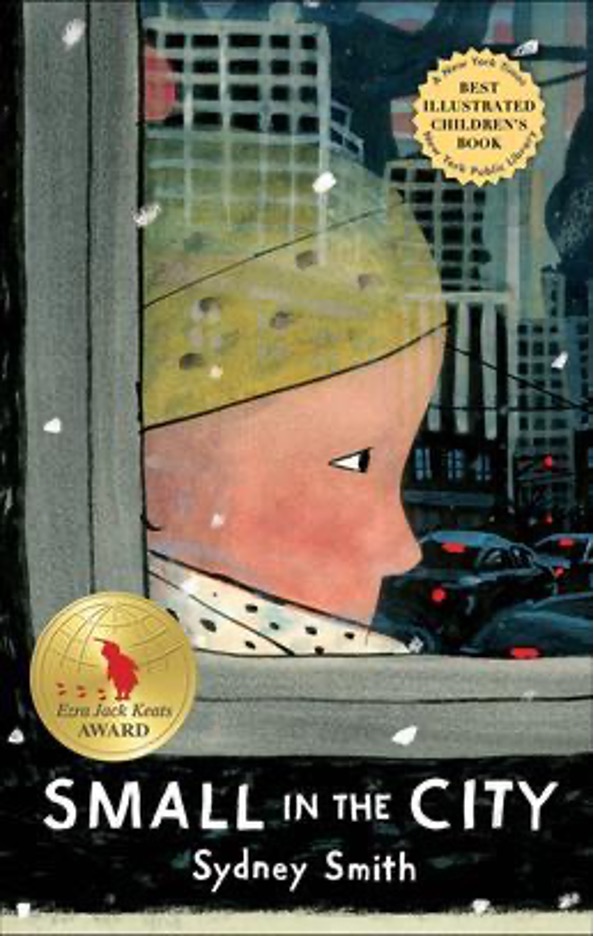 This HCAA nominee spotlight is courtesy of Devon Arthur and Ekaterina Shatalova, in partnership with Evelyn Arizpe and the Erasmus Mundus programme, the International Master’s in Children’s Literature, Media and Culture (IMCLMC).

Canadian illustrator Sydney Smith brings the world to life in watercolour and ink. His award-winning picturebooks explore an outsider’s perspective with grace and honesty.

Sydney Smith (b.1980) is an award-winning illustrator and author of children’s books. Born in rural Nova Scotia, a maritime province on the East Coast of Canada, he started sketching at an early age and went on to train in drawing and printmaking at the Nova Scotia College of Art and Design (NSCAD).

Smith’s career in illustration began in 2010. While this may seem like a short time ago, Smith has established himself as a prolific creator since emerging on the children’s literature scene. With eleven picturebooks to his name, along with spot illustrations and cover art for several other titles, he is a prominent figure in the world of children’s publishing. Translated into several languages, his body of work transcends cultural and geographic boundaries.

Smith’s nomination for the Hans Christian Andersen Award comes as little surprise to those who know and love his work. His significant contribution to children’s literature makes him a worthy contender for this lifetime achievement award.

Smith’s oeuvre has been praised by critics and prizing committees alike, making him one of the most awarded illustrators in Canada today. Sidewalk Flowers (2015) won the Governor General’s Literary Award for Children’s Illustrated Books and was named a New York Times Best Illustrated Children’s Book of the Year in 2015. Town is by the Sea (2017) won the TD Canadian Children’s Literature Award. Smith is a two-time CILIP Kate Greenaway Medal winner, receiving the prestigious award in 2017 for Town is by the Sea and again this year for Small in the City (2019). His most recent work, I Talk Like a River (2020), in collaboration with poet Jordan Scott, won the Schneider Family Book Award and Boston Globe-Horn Book Award.

The following selected titles highlight Smith’s range and capabilities as an illustrator.

A poignant ode to mindfulness and connection, this wordless picturebook prompts readers to pause and consider how they engage with the world around them. A father and daughter walk through the city. While he is distracted on his phone, she observes the cityscape, picking wildflowers that have grown through cracked cement and leaving them as offerings for the people and creatures they pass along the way. Striking ink and watercolour images command attention over multiple readings as they are lush with detail and visual intrigue. Much of the artwork is rendered in black and white, with occasional punctuations of colour (the girl’s red hoodie, the flowers, etc,). Smith blends picturebook and comic book conventions, utilizing panels and spreads to structure the story in a unique hybrid form.

A young boy narrates a day in his life growing up the son of a coal miner in a seaside town. The expanse of the sea is presented in stark contrast to the oppressive underground tunnels of the mine. Similarly, the freedom of childhood is contrasted against the routine of adulthood. This work showcases Smith’s finesse as a landscape illustrator, as his signature watercolours deftly capture the harsh beauty of the maritime landscape.

Smith’s authorial debut, Small in the City is a fine example of his knack for sequential art with a cinematic feel. With minimal text, the story follows a child navigating a big, snowy, and sometimes scary city, offering advice on how to get around to an unnamed listener. Readers soon realise that this advice is aimed at someone in particular — someone smaller but no less important. Carefully constructed pages are filled with panels reminiscent of a graphic novel or comic, with bold charcoal lines and subdued colours bringing the city (unmistakably Toronto) and its moody atmosphere to life.

Based on the author’s experience, I Talk Like a River sensitively depicts the everyday struggles of a child with speech difficulties — an important topic that is too rarely given the spotlight. Scott’s lyrical prose and Smith’s textured watercolour and gouache illustrations capture painfully acute feelings of isolation and loneliness. As the narrator finds refuge in the “whirling” river, Smith moves from restricted panels to fluid double spreads culminating in a luminous, almost impressionistic double gatefold that perfectly reflects Scott’s river metaphor for the flow and rush of the speech.

WHY THE HANS CHRISTIAN ANDERSEN AWARD?

One of Smith’s greatest strengths as an artist is his use of perspective, both visually and narratively. As art critic John Berger wrote, “every image embodies a way of seeing.” Likewise, each of Smith’s books showcase a unique point of view, exploring different ways of observing and being in the world. His capacity to showcase a child’s perspective without resorting to sentimentality is particularly striking. Smith’s illustrations capture a wide range of experiences and emotions that elicit empathic response. His overarching themes— including solitude, exclusion, and otherness— will be familiar to readers of all ages.

Smith’s illustrations evoke a deep sense of place, be it the urban landscapes of Sidewalk Flowers or Small in the City, or the seaside locale in Town is by the Sea. Geography has played an integral role in his artistic development. Smith has commented on the creative draw of water and light, elements of his childhood in Nova Scotia that continue to influence his practice.  By immersing the reader in a range of spaces, which he depicts with great attention to detail, each book becomes a transportive experience.

Smith’s distinctive style and experimental uses of form encourage visual engagement and slow reading. His artwork expands upon the written words (where there are written words), enhancing the meaning of the text. Through a skilful use of gaps and gutters, the reader is encouraged to fill in some blanks and engage in the act of narrative meaning-making.

The Hans Christian Andersen Award selection criteria considers “the ability to stretch the child’s curiosity and imagination.” We can think of no better description of Sydney Smith’s artistic achievements. As demonstrated by his international acclaim and critical reception, Smith has made a significant contribution to the field of children’s literature.

Find Sydney Smith online at https://www.sydneydraws.ca/ and on Instagram @sydneydraws.