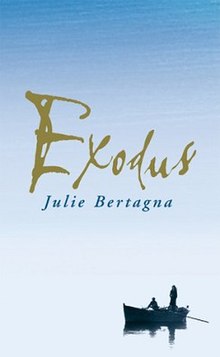 Almost every day right now, someone contacts me on social media to say how young climate activist Greta Thunberg reminds them uncannily of Mara, the teenage heroine of my eco-epic Exodus trilogy (2003; 2007; 2011), set in a futuristic Scotland.

Greta gave me goosebumps the very first time I saw her, a teenager fighting to save her world, as she did indeed seem to be the embodiment of the fictional character I first imagined 20 years ago.

In Exodus, Mara tries to save her people in a drowned world of the future, but her story was inspired by a very real cry for help from a drowning island on the other side of the world. 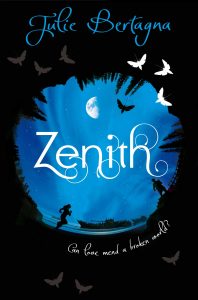 One drenching wet day I sat in my favourite local cafe, waiting for the Glasgow rain to stop. It was 1999, before climate change was news. A snippet in a newspaper caught my eye. It was an SOS from the other side of the earth. A tiny island nation in the Pacific Ocean, Kiribati, was battling to survive storms and rising seas. The islands are so small they looked like a scatter of stones in the vast blue ocean, thousands of miles from anywhere else. Help us, the islanders cried to the outside world. Our ocean is rising. Save us from being swallowed by the sea. 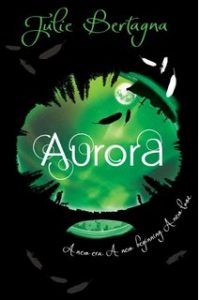 The rest of the world sipped its coffee and turned the page, barely noticing this tiny story on page 22 of The Independent. I’m still not sure why I did. Maybe if I’d had an umbrella or the rain had eased off sooner, I would have skimmed over it too. But the rain was relentless and my notebook was full of useless scribbles about the story I was supposed to be writing. I was trapped in the cafe, looking for an escape from a story going nowhere.

So I paused, and the horror of this faraway SOS took hold.

As I walked home in my city in a rainy island nation at the opposite side of the globe, I couldn’t stop thinking about the faraway islanders and their cry for help.

I began a quest to find out more about the plight of Kiribati, which was British until it gained Independence in 1979. I researched climate change and global warming and rising seas. Back then, the internet was in its infancy and there was barely any climate news, but I sourced the latest scientific papers and was aghast at what I found. I walked around Glasgow, a city of hills and valleys, imagining it struck by great floods.

I found a photo of a Kiribati child staring out at a savage sea, her village sandbagged, the sea almost at her door, an image so haunting I couldn’t get it out of my head. I’d grown up in Ayrshire and Glasgow, on the (often) wild and wet west coast of Scotland. I thought of that coastline, the islands of Scotland, battling ferocious seas and storms, and tried to imagine what a future of superstorms and sea surges might do to them. What if climate change raced out of control? It seemed such an unlikely prospect, back in 1999, and yet . . . my imagination started to spin and I was gripped by an unnerving thought.

What would all our futures be if that were to happen? What if the disaster unfolding in Kiribati was a foreshadowing of a much greater global one?

All of a sudden a girl seemed to leap out of that future and into my head. She began to tell me the story of her battle to survive in a flooded world. I didn’t so much write it down, I felt I was channelling her! Her story wasn’t about an island like Kiribati at the far side of the world, about lives I felt I had no right to pretend I knew about. This was a voice from somewhere I knew well. A storm-wrecked Scottish island – but at the beginning of the next century. I wanted to turn the story on its head and create a vision that would shake the readers, wake them up to a secret that was being kept about our future.

In 2099, Mara’s island, Wing, in the North Atlantic, is drowning after a century of storm. Across the ocean, a boy called Fox lives in a hi-tech city that soars into the sky, way above the flooded ruins of what once was my own city, Glasgow. This teenage boy and a girl crash together like flotsam and jetsam in a tempest, through a miracle of technology, and they change the whole world.

At the top of a giant tower is the corrupt old ruler of this brave new world, Caledon, who has built a Great Wall around his sky city to keep out desperate refugees like Mara. My anti-hero Caledon pre-Trumped Trump, whom I’d never heard of back then.

As I wrote Exodus, the world was changing fast around me. Climate disasters began to wreak havoc. Hurricanes, wildfires, drought, ice melts at the poles, faster and vaster than expected. English friends living on Lesvos whom I’d met years ago on holiday, on an island that felt like a Greek paradise, have found themselves at the cruel heart of the refugee crisis as thousands upon thousands of child and adult refugees land, literally, on their seafront doorstep. Some wash up drowned after perilous journeys to escape war, famine, drought and all kinds of danger in their own lands – situations often intensified by climate change, as in Syria. Their perilous journeys are mirrored in Mara’s futuristic plight in Exodus.

Most of my stories have Scottish settings because I’ve never forgotten the shock of delight as a ten year old on discovering that the book I’d borrowed from my local library in the suburbs of Glasgow (The High House (1967) by Honor Arundel) was set in Edinburgh. I’d never known such a thing before! Stories always happened somewhere else. But even in The High House, Emma, the young protagonist, is from elsewhere and she experiences Scotland as an outsider. There is a wonderfully rich vein of children’s historical fiction set in Scotland but I sought to create a range of contemporary Scottish teen characters and stories; in Mara I particularly wanted a strong, believable, complex modern heroine – because at that point in time, there were barely any – in a story that pushed the boundaries of what young fiction could be.

As a young teacher, I had been hugely inspired by Theresa Breslin’s books when I was seeking out contemporary Scottish children’s fiction to engage my class of 11-year-old (mostly) reluctant readers in a challenging area of Glasgow, who just didn’t see themselves or their lives reflected in the books in the school library. But Theresa Breslin’s Simon’s Challenge (1988) on schools TV (starring a young Joe McFadden) reeled them in, with its themes of redundancy, money worries and family breakdown. We watched the TV series then read the book and the children found lots to engage with, but when I cast around for more contemporary Scottish children’s stories, I found them very thin on the ground.

Eileen Dunlop’s atmospheric The House on the Hill (1987) was a favourite, and we created a fantastic class project based on Mollie Hunter’s The Walking Stones (1976), an unusual mix of seers, standing stones and hydroelectric power which beautifully merges myth, magic and modern Scotland and opened my mind to the possibilities for exploring a new kind of Scottish children’s fiction. Joan Lingard’s ground-breaking stories set in Belfast and Glasgow were just too challenging for my young class, sadly.

I’d always wanted to write and had half-finished adult stories under my bed, but all of a sudden I saw that there was a great gap to be filled in contemporary Scottish stories for young readers. So I set myself a challenge. In my lunch hours, after I’d marked and prepped for the afternoon, I’d stare out of the classroom window at the enormous tower blocks surrounding the school and dreamed up my first novel, The Spark Gap (1996)), a story of runaway Glasgow teenagers with a mystical Highland episode, inspired by the world right outside my classroom window, influenced by all of the above writers, and many others such as George Mackay Brown.

By the time I was writing my second novel, Soundtrack (1999), (which also combines that mix of otherworldliness, myth and modern Scotland I’d been percolating) contemporary teen Scottish fiction was really hitting its stride with Cathy MacPhail’s Run, Zan, Run (1994) and Alison Prince’s The Sherwood Hero (1995), alongside Theresa Breslin’s Carnegie Medal winning Whispers in the Graveyard (2007), to be followed a few years later by Cathy Forde, Linda Strachan and others – and recently by new talent Victoria Williamson’s topical and powerful stories.

Now Exodus is on its fifteenth reprint, published in many languages around the world, and there’s a special 15th anniversary edition, this story of how young people can change their world, even when the future seems sunk, has a whole new generation of readers.

It’s truly frightening that the story has far more resonance now than when it was first published – thanks to Greta Thunberg, Extinction Rebellion and the now-critical climate crisis. But the ultimate message of the Exodus trilogy and its young characters is that the future is not set in stone – it’s in your hands. Anything is possible, as Greta Thunberg is proving to us all.

Dunlop, Eileen (1987) The House on the Hill. Oxford University Press.

Ann Lazim is the Literature and Library Development Manager at the Centre for Literacy in Primary Education, London, www.clpe.org.uk, which holds a large collection of traditional tales retold for children. She is a member of the IBBY UK committee, a previous Chair and was co-director of the 2012 IBBY International Congress.