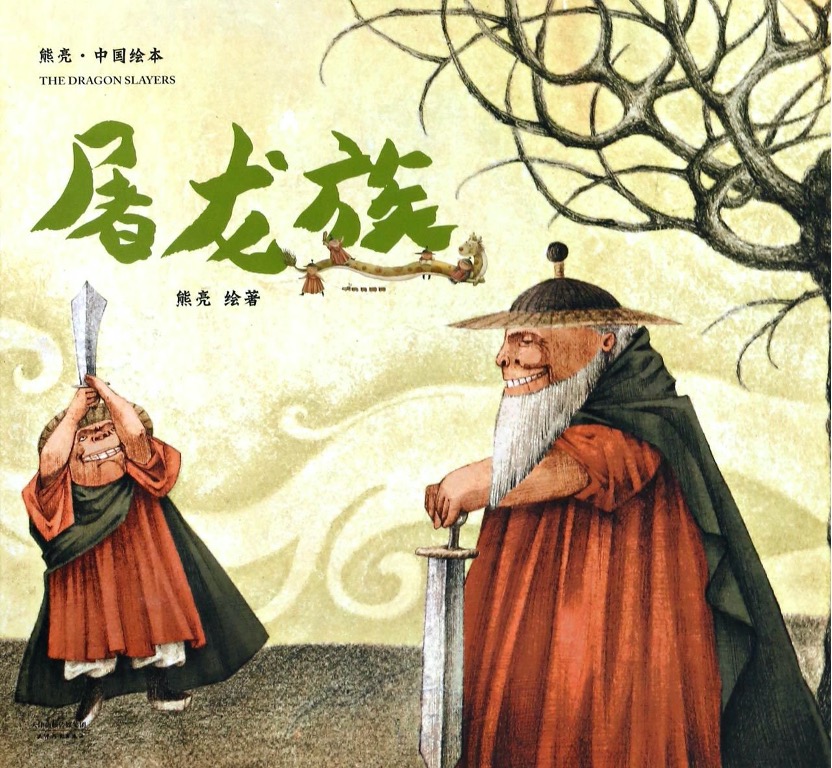 This HCAA nominee spotlight is courtesy of Yunshu Jiang and Yuyu Liu, in partnership with Evelyn Arizpe and the Erasmus Mundus programme, the International Master’s in Children’s Literature, Media and Culture (IMCLMC).

Xiong Liang is a Chinese ink wash artist, illustrator, and writer. Born in 1975 in Zhejiang Province, China, he studied traditional Chinese ink wash painting from childhood (IBBY, 2018). He has been creating stories and illustrations of picturebooks since the 1990s even though there was no market for picturebooks in China yet. To date, he has published more than 30 picturebooks. His works span various fields. In addition to children’s picturebooks, he also created literary picturebooks for adults, for example, Tales of Darkness. His major works, The Solar Terms, The Stone Lion, and Wandering with the Wind led to his nomination for the Hans Christian Andersen Award. In an interview (Fengshows, 2019), he stated that he believes that each work is an exploration just like philosophy. He thinks that, without rules, to freely reveal the real is positive. Therefore, he wishes not to be confined by a specific identifiable style of work. His first intention to create picturebooks and stories was to show curiosity and confusion about the world from a child’s perspective and strive to maintain such enthusiasm. Meanwhile, he believes that transforming his ideas into works to communicate with the world becomes social works, so his work changes according to the needs of the times not only to cater to the needs of the public but also to speak out for the underrepresented voice.

With such a creative conception, Xiong Liang’s works are full of innovative combinations of classical and modern styles from diverse cultural contexts, which are embodied in both his art and literary style. Many of his illustrations have prominent features of classical Chinese freehand ink wash painting — the use of lines expressing blocks, a large amount of white space in images, and the low saturation and brightness create a tender and soft atmosphere, distinguishing his artworks from many children’s picturebooks where bright colors are extensively used. Simultaneously, the graphical projection perspective in the graphic arts is applied, which is different from the classical Chinese painting tradition. In addition, Xiong Liang, also influenced by the modern comic style, uses exaggerated body proportions, facial expressions, and movements to portray the characters. With regard to the narrative of images, Xiong Liang uses a film-like camera language to tell stories. He flexibly adjusts the distance and angle of view, conveying the storylines and character traits through shifting between wide shots, medium shots, and close-ups. Just like his paintings, Xiong Liang’s literary style is a mixture of diverse styles and elements from different periods and cultural contexts. His ink applies Wenyan (classical Chinese) and poetic rhymes, showing a child’s leisurely and intriguing adventure experience in an elegant and gentle mood in line with classical Chinese aesthetic features. At the same time, the concise and colloquial language style makes the modern picturebooks readable for the intended child readers. Moreover, decorative texts are often made an integral part of the image, increasing the dynamic sense and complementing the information expressed by the pictures. The interaction between the illustrations and texts, which is not limited by any particular style, creates the distinctive world of Xiong Liang’s picturebooks.

Breaking through typical styles and patterns, Xiong Liang reinterprets and deconstructs traditional Chinese themes from modern perspectives. When creating works, Xiao Liang is child-oriented by envisioning children’s emotional changes or cognitive changes that each page will bring to them when they are reading. For instance, the illustrations and narratives of “The Little Stone Lion” guide child readers to explore the significance of the little stone lion from different angles, from the extension of the large physical size of the little stone lion, to the importance of the little stone lion’s ever-lasting existence, to the little stone lion’s emotional significance to the community. In addition, Xiong Liang also adds postmodern features to narratives. He incorporates the materiality of books in the narratives, by linking the story with the physical characteristics of the books. In The Solar Terms, Xiong Liang thinks that child readers may feel sentimental when the protagonist, a symbol of nature, eventually reaches the end of the four seasons and dies down. The protagonist, hence, says that his life will revive and cycle again as long as child readers restart reading from the first page. Xiong Liang also deconstructs the traditional Chinese totem. For example, in the story of The Dragon Tribe, he reinterpreted the origin of the Chinese auspicious symbol of the dragon. He positions the dragon as originally an enemy who eventually reconciles with the dragon tribe who hence changes from hunting for dragons to celebrating dragons, referring to the Chinese culture. This story is a vivid example of Xiong Liang telling new stories through traditional cultural themes.

In addition to traditional folklore, nature is also a favored theme in Xiong Liang’s works. The Swordsman Mu Ke series uses ink wash painting style and folklore elements to depict the Chinese rural nature where children make an adventurous journey. The stage presents the animistic worldview in Chinese folk beliefs. Xiong Liang draws inspiration from classical Chinese mythology to create new stories of magical creatures placed in the natural world, giving each ordinary natural phenomenon a romantic and mysterious color. What’s more unique is that he even put the mythological beasts and ordinary creatures together with man-made machinery after the industrial age. For example, he designed a cloud-maker, a divine character who creates clouds with the help of magical beasts using man-made machines such as ducts and ovens. This ingenious design implies the author’s view of the close connection between man and nature. Moreover, human characters’ attitudes towards nature embody the idea of the Chinese Taoist classical philosophy: human beings can unconsciously empathize with animals and plants and build a harmonious relationship with them. On the other hand, echoing posthumanism, the implications of human beings and their relationship with the world is constantly discussed in characters’ dialogues. They emphasize that humans are not necessarily superior to other creatures and that humans have no right to define other creatures who have their own will. In short, Xiong Liang centers on children’s perspective to present themes with distinctive ethnic characteristics, flexibly and imaginatively combining inspirations from different styles, cultures, and philosophies.

Fengshows (2019) 《名人面對面》專訪中國繪本大師熊亮：無論何時 只為自己創作 <Face to face with celebrities> Interview with the master of Chinese picturebooks, Xiong Liang: No matter what, create for yourself [Video]. https://youtu.be/K5bpsmFleIw