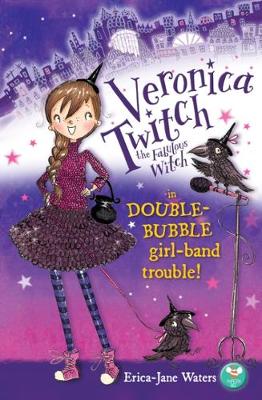 Veronica Twitch is the editor of Twitch magazine. She and her two friends, witches Figgy and Pru, leave school at the age of twelve and find jobs with Twitch magazine. The rival magazine to Twitch called Nosy Toad is intent on increasing its circulation rather than giving inspiring advice to teenage witches.

The trio who run Twitch is highly excited, as they have secured an agreement with Double Bubble, the most popular of girl bands among the witching community. The band will play at Witchfest, the most important festival of witches. However, these plans all collapse when the girl band is kidnapped. Veronica and her friends are left wondering whether Belinda Bullfrog, the editor of Nosy Toad, is involved in the kidnap and whether they can rescue the band in time for the festival.

This book is presumably aimed at a similar age group to Jill Murphy’s The Worst Witch, namely girls between six and eleven. A major point of interest in Waters’s book is that it begins to level criticism against printed media in a way that used to belong exclusively to literature for older age groups. The girl band have a subversive tactic: whatever they tell the press is the opposite of the truth. The book shows how even young children need to make themselves aware of the phenomenon of fake news and the possibility that innocent remarks can be depicted as sinister. It is a pity that children in the era of disinformation need to develop such sceptical awareness. But the need is undeniable. This book delivers the relevant message in an engaging and enjoyable manner.