The Sword and the Broom: The Exceptional Career and Accomplishments of John Mercer Langston by Linda Salisbury 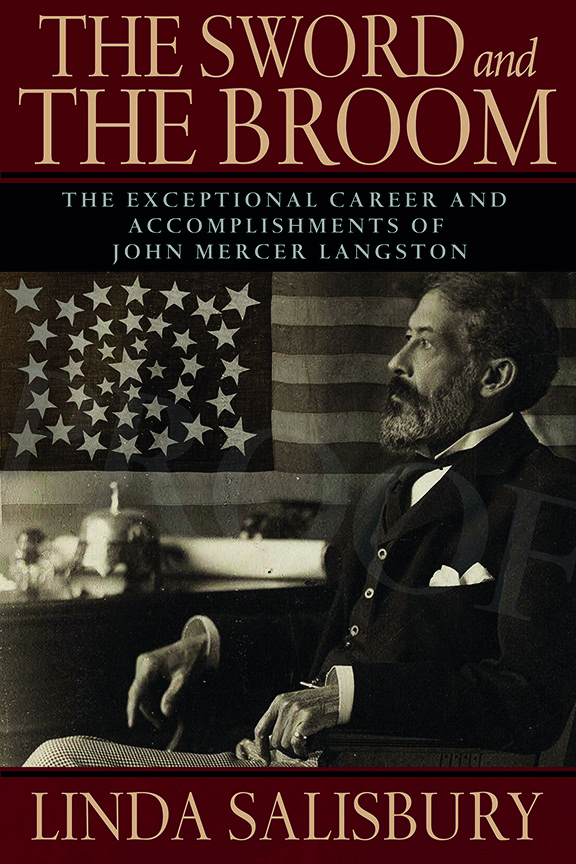 This well-researched biography, illustrated with the author’s photographs and with archive material, is Linda Salisbury’s retelling for young adults of John Mercer Langston’s 534-page autobiography From the Virginia Plantation to the National Capitol, or the First and Only Negro Representative in Congress from the Old Dominion (1894).

Salisbury’s book was the Forward INDIES Silver Winner for Young Adult Nonfiction in 2016, and tied for a Bronze Medal in the Juvenile-Young Adult Non-Fiction Category in the 2018 Independent Publisher Book Awards. Langston’s autobiography was written in the third person, perhaps, as Salisbury suggests, ‘to imply objectivity about reporting his numerous accolades and praise’ (p.6). Her resources, listed at the back of the book, include the several books written about him such as John Mercer Langston and the Fight for Black Freedom 1829–65 by William Cheek and Aimee Cheek (1989) that gives personal details such as ‘how Langston and Carrie [his wife] addressed each other’. 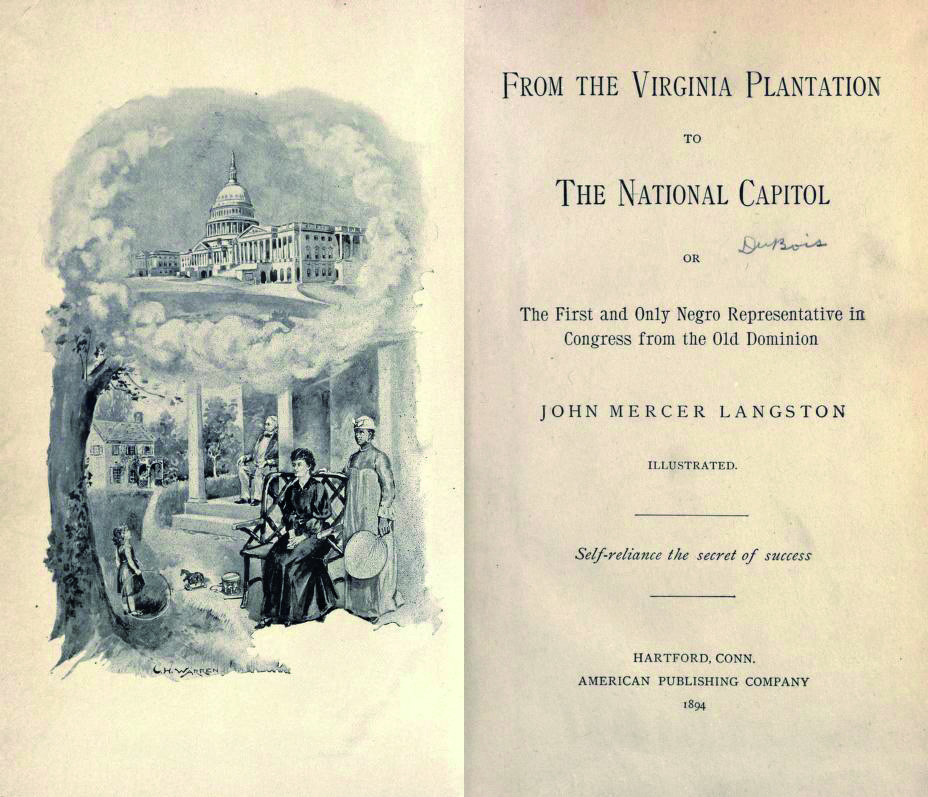 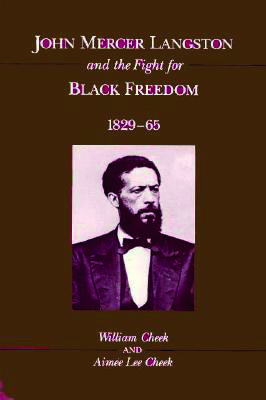 There are some printing errors, but this is a fascinating account of a courageous and determined man. Langston (1829–1897) was a black American, his father, Ralph Quarles, a wealthy, white landowner and an American Revolutionary War hero, while John’s mother, Lucy, was of black and Native American heritage and a slave whom Ralph had set free. Ralph ‘owned slaves out of necessity’ but treated them well so they never felt the need to run away (p.19). Ralph and Lucy lived together on his Virginia plantation for almost 30 years, the law not allowing mixed race marriages, and their children were ‘subject to the laws regarding blacks’ (p.16). John had two brothers, Gideon and Charles, and a half-brother, William, and his two sisters.

Born in Louisa County, Virginia in 1834, John, as a bright, barely five-year-old, was orphaned and went to live with a kindly white couple who sent him to a school for white children. Orphaned again, he was moved to Ohio, and it was here that his professional life as a lawyer, abolitionist, educator and politician would develop. Oberlin College was, in 1835, the first college in the nation to admit a black student and the first to admit women in 1837. John excelled there, graduating with honours. Charles, his older brother who would also become a well-known abolitionist, predicted, correctly, that John would become a great orator.

One episode in Salisbury’s biography gives particular emphasis to the plight of black slaves. As a boy, John enjoyed listening to the ghost stories that Uncle Billy, who was the oldest and most respected of the slaves on Ralph Quarles’ plantation, would tell him. These were not ordinary ghost stories for the ‘ghosts’ were fugitive slaves that were running away to Ohio, a free state, while those that helped them by giving them food and shelter pretended not to see them. Years later, one of these ‘ghosts’ would become a courageous leader and hero in the fight for freedom during the American Civil War.

As this biography reveals, the Southern States ensured that black people were routinely humiliated. Even those who were free, including John and his brothers, were required to carry a copy of their registration at all times in order to avoid captivity, especially when they travelled. The Fugitive Slave Act of 1850 meant that runaways and freed slaves were unsafe even in a free state like Ohio. Slave-catchers kidnapped one young runaway, but inhabitants in Oberlin and Wellington rescued and hid him until he could be taken to Canada.

Salisbury’s timeline is helpful as her narrative, following Langston’s example, is not always in chronological order. A full and distinguished life, there are particular episodes he recalled in his autobiography, and are retold here, that breathe life into the man and reveal his strength and integrity. For instance, he wanted to study law and the principal of a law school in Ballston Spa, New York State, suggested that he ‘edged his way into his law school by pretending to be a Frenchman or a Spaniard from the West Indian Islands in Central or South America’ (p.67). Langston, who was a loyal American patriot, flatly refused. He was accepted at Oberlin Theological Seminary, the first black seminary student in the nation, where he gained his master’s degree in theology, having developed his ability as a public speaker by giving talks on anti-slavery and by preaching. He subsequently studied law under Judge Philemon Bliss.

Langston, who would, in 1867, be admitted to practice before the Supreme Court, was called to the Ohio Bar in 1854, in each instance the first black American to do so. His clients were predominantly white for, as Salisbury explains, at that time all juries and courts were white under Ohio law. This made black people unsure that they would be fairly treated, especially if their attorney was also black. Throughout his professional life Langston would encounter racial prejudice and he occasionally resorted to blows in order to defend his dignity and honour. Fortunately, judges were invariably sympathetic, feeling that his actions were justified. It is revealing that when, in 1885, he became dean of the law department at Virginia Normal and Collegiate Institute for black students, he could say that it was the happiest period of his professional life.

Also in 1854 Langston married Caroline (Carrie) Wall whose background was similar to his: her father too was a wealthy white plantation owner but unlike Langston’s mother, her mother remained enslaved. John and Carrie, always a supportive companion who shared his Christian faith, eventually settled in Oberlin, Ohio and had five children.

Salisbury clearly sets out the escalating unrest in the Southern States over the call to abolish slavery. These states had already withdrawn from the Union when, in 1863, the Emancipation Proclamation was issued by President Abraham Lincoln, recently elected for a second term. The resulting rebellion was the beginning of the American Civil War. Langston helped in recruiting troops for the formation of black regiments and took it personally when so many died.

In 1865, Lincoln was assassinated five days after Robert E. Lee surrendered to General Ulysses S. Grant at Appomattox Court House. A black regiment was allowed to carry the coffin of the ‘Great Emancipator’ to its resting place in the rotunda of the Capitol. Lincoln’s successor was Andrew Johnson, but he failed to make an amendment to the Constitution to eliminate slavery as many had hoped.

As Salisbury points out, her narrative, like Langston’s, is not so much reflective as episodic. In 1866, the state Constitutional Convention in St Louis, Missouri, met to consider civil rights for freed people to accord with the Constitution of the United States. Here, Langston gave a speech on the ‘importance of education, labour, thrift, temperance, morality and economy to promote permanent progress in freedom’ (p.119). In 1867, he was appointed General Inspector of the Freedmen’s Bureau. As such he would have to help those freed to deal with the hate and prejudice that they would encounter. The war had ended, but the ill will of those in the states that had left the Union continued. In 1868, Grant, the former Secretary of War, was elected president and in 1871, under Grant’s leadership, Langston helped to draft the Civil Rights Bill. Black males were now allowed to vote and gain full citizenship.

Langston became Minister Resident/Consul General of Haiti in 1877 and later, in 1884, Chargé d’Affaires to Santa Domingo. In 1888, he became the first black American to run for Congress from Virginia’s Fourth District that had a population in which blacks outnumbered whites but the fraudulent election results delayed his taking up his post for 19 months. As Salisbury comments, Langston was justifiably frustrated and bitter as is reflected in his lengthy account of the election. However, when he at last took up his seat in the House of Representatives, one supporter had left a floral arrangement on his seat. It was composed of a sword and a broom, the sword symbolising Langston’s overcoming opposition, the broom of destruction ‘with which Good Providence had swept [obstacles] out of his pathway to victory’ (p.186).

Salisbury points out the relevance in the USA today of Langston’s narrative as ‘issues of race and racism … continue to be part of the national fabric’ (p.9). Such issues exist in the UK too. It is a bitter irony that, due to inadequate administration, members of the Windrush generation who arrived in Britain – at Britain’s invitation – between 1948 and 1971 should now have difficulties proving their lawful status. This has caused those affected considerable stress and a deep sense of alienation.

Particularly poignant, therefore, were the several exhibitions held in 2018, including Passport to the Motherland – Migration Dreams at the Victoria and Albert Museum, London, to celebrate 70 years since those from the Caribbean first arrived in Britain.

John Mercer Langston, who died, it is thought from a heart attack, in 1897 at his home in Washington DC, deserves to be more widely known, and this biography by Linda Salisbury, who understandably has a deep respect for the man, places him at the centre of a pivotal period of America’s history.

Langston, John Mercer (1894) From the Virginia Plantation to the National Capital, or The First and Only Negro Representative in Congress from the Old Dominion. Hartford, CT: American Publishing Company. (A 2013 edition is on Amazon, published by CreateSpace Independent Publishing Platform.)

Salisbury, Linda (2017) The Sword and the Broom – The Exceptional Career and Accomplishments of John Mercer Langston. Mineral, VA: Tabby House. [Note: Books published in the USA at the end of a calendar year, in this case November2016, are allowed a copyright date of the following year, in this case 2017.]