The Story of Babur: Prince, Emperor, Sage. The Great Epic of Central Asia 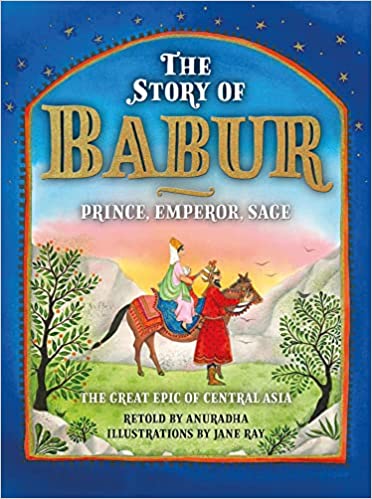 This is an exciting collaboration between the Nepalese writer Anuradha and the award-winning illustrator Jane Ray.

Working from Babur’s autobiographical text, Anuradha uses the first-person narrative and a mixture of direct quotes from Babur alongside retellings of his experiences from his early life to later adventures. It is a very accessible read, full of details of interest to a child reader. Babur’s is a story that deserves to be more widely known and there are many lessons and discussions that can come out of a reading of this book.

Babur’s life is not simply a tale of daring and wars. It is full of ups and downs, failures and losses as well as great successes. He is reflective about this, analysing the impact this has on his thinking and behaviour. He talks about the ordinary pleasures and vicissitudes of life, of poetry and music, parties and feasts, places and visits, family life, adverse weather conditions and the dangers this brings, health issues. It is a commentary full of life, particularly after his arrival in Hindustan where he vividly communicates his excitement about the animals, the food and everything that is new to him.

Babur became a king at 12 and by 15 he had made what he considered his greatest achievement, the conquest of Samarkand, the city of his dreams, described in great detail. But his story is not a smooth one and he lost all he had gained both in his political and personal life and became destitute. It was through a strong will that he later rebuilt his power and personal life and extended his rule through Afghanistan to Hindustan.

Jane Ray’s distinctive style of illustration perfectly suits the subject. Her rich vibrant colours and attention to detail are reminiscent of Indian miniatures. There is a mixture of whole page illustration, banners and patterns and more specific detailed illustrations.

A note on the language. The original text was written in Chagatay, a form of Turkish, and then translated into Persian by Babur’s grandson, Akbar, and then subsequently translated into many languages. Anuradha has worked from English translations of the Chagatay text.