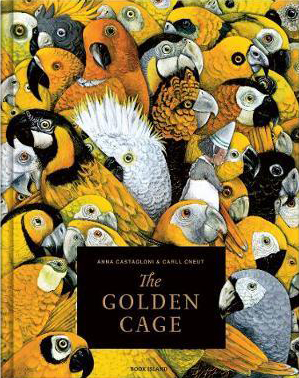 Valentina wants a talking bird and will go to any lengths to get her wish. Her servants cannot keep up with her requests and as each one fails she chops off their heads. One day however, she is told that if she promises be patient then her talking bird will be bought to her. This is duly done, in a roundabout way, but not all is as it seems. Can Valentina be patient for she will have to wait longer than she thinks?

This is a large format book that is a pleasure to hold, ergonomic, despite its size, and an object of desire, rich and sumptious in both clolour and style. The story is woven around Valentina and her servants and this relationship is amplified through the digital and hand rendered texts amidst rich and sumptious art work juxtaposed with an almost naïve style that both complements and amplifies the text. The word ‘chop’ is used on several occasions with some effect, as the story almost starts again in pursuit of Valentina’s goal, each time becoming more and more forboding. There is something alarming about the empty cages which manifest themsleves in the open ending where we are given a number of possible conclusions, the Golden Cage being both Valentina’s and the readers object of curiosity. Laura Watkinson’s beautiful and sensitive tranlation makes this a book that one wants to pick up and read again and again, each time finding something new to see in each image or words to hear in the text. A beautiful book, a piece of art, that belongs on any book shelf!