The colours of history 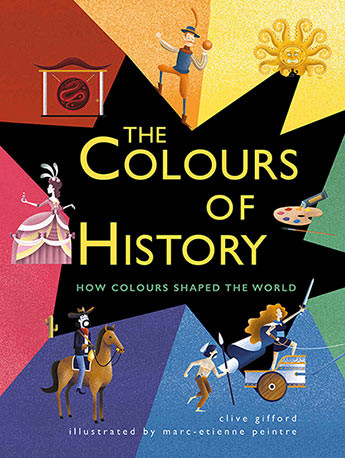 This is a fascinating book which ranges widely across time and culture to bring us stories of twenty-four colours and the way in which we have made, used, traded and even worshipped colour. Told in double-page spreads, in bite-sized paragraphs, and with striking cartoon illustrations, it’s an ideal book for browsing. Investigate a few colours and you find how they have defined aspects of our lives: how, as metal or spices, they have driven conquest; the lengths to which we have gone to extract the particular tints and hues that are most sought after; and the strange connections that are sometimes made across thousands of years. Did you know that a particular shade of brown used by artists from the 1500s to the 1960s was made up of the crushed wrapping from Egyptian mummies, and that the artist Edward Burne Jones, when he discovered this in 1881, buried his tubes of brown paint reverently in the garden?

Clive Gifford’s text is full of such revelations which are often given a touch of human interest and humour. It is an approach that painlessly brings together social, cultural and economic history, and even some chemistry and natural history. Tyrian purple required the shells of 9,000 sea snails to make a single gram of a dye which was three times more expensive than gold in the ancient world. No substitute was found until an English chemist discovered one in 1856 as a by-product of his search for a cure for malaria. Although this is a story predominantly about colour in the Western world, and sometimes about its role in imperial conquest, Asia and Africa do make an appearance.