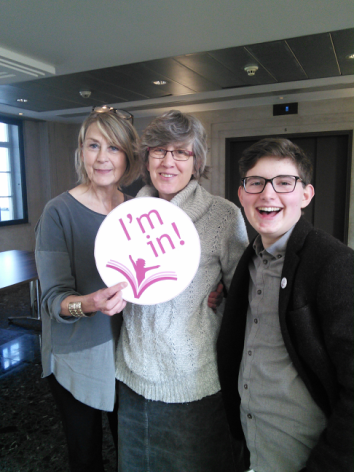 We weren’t entirely sure what to expect of the two grey crates of Silent Books when they arrived at Glasgow University’s School of Education. Would many of the texts in IBBY’s Silent Books: Final Destination Lampedusa collection seem familiar? How many would there be? And what kind of things could we do with them? Once the boxes were opened (to a collective ‘aaaaahhh’) it soon became clear what the books demanded of us: they needed to be shared, discussed and explored by as many people as we could possibly muster.

So muster we did, starting with a series of drop-in browsing sessions that were offered to staff and students from all over the university. Hosted by our growing team of children’s literature and literacies staff and PhD students, the sessions were intended to be informal spaces for reading and discussing the books in as much (or as little) depth as desired. Some of the most enthusiastic readers came from our current cohort of student primary teachers, who left the sessions with notepads bulging with titles and ideas of possible lesson plans inspired by the books. Many other people simply enjoyed the pleasurable freedom that came from wandering around the collection. The books were also read and enjoyed during seminars with students from Glasgow University’s popular MEd in Children’s Literature and Literacies, who considered how the collection could be extended even further still to include texts from their home countries and contexts.

In our final days with the books, we held a very well-attended workshop, involving participants from both inside and outside of the University, including colleagues from the Scottish Book Trust. Led by Dr Evelyn Arizpe, who introduced the collection and explained the power and potential of their wordlessness, the focus of the afternoon was very firmly on readers’ responses to the books. Several volunteers had offered to ‘adopt’ a book earlier in the month, and took to the visualiser to share their ideas, questions and enthusiasm with the rest of the room. We are planning to collate all of the ‘adoption’ information together into one document and will make this available to IBBY members too.

Just as IBBY volunteers continue to use these books with the temporary, multilingual residents of Lampedusa, we have loved sharing them with our student teachers, researchers and staff here in Glasgow. They have introduced us to new models of storytelling, while drawing our attention to the vast quantity of quality texts that have literally become ‘lost in translation’ due to the current publishing climate and dominance of Western texts. And, as ironic as it sounds, we have also discovered that silent books are quite noisy things. The sessions we organised were filled with exclamations, recommendations, conversations linked to meaning-making and brow-scratching, but most loudly of all, laughter.