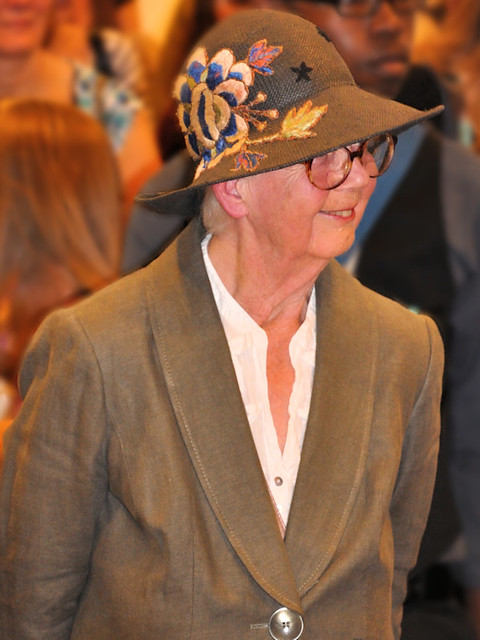 IBBY UK laments the loss of Shirley Hughes C.B.E, our honorary, and much honoured, member who died aged 94 in February. She was our nominee for the Hans Andersen Award for Illustration in 1997. Here, Clive Barnes pays tribute to her life and work.

In her prodigiously productive career, the books and characters she created are among the most recognisable and influential of the last half century. She took full advantage of the expanded opportunities that came to her as a children’s illustrator and she was a perceptive observer of the great changes that were taking place in children’s lives. She made her reputation as an illustrator of other people’s stories, perhaps most notably of Dorothy Edwards’ My Naughty Little Sister series, which demonstrated her empathy, her attention to detail and nuance in how children looked and acted, and her own mischievous sense of humour. But she quickly took to writing her own texts and produced her first picture book for younger children, Lucy and Tom’s Day, in 1960. She was one of the pioneers of the subtle interplay of word and image characteristic of the modern picture book, and, in the 1970s, she hit full stride. Everyone should know Dogger (1977), her heart tugging drama that shows us loss, sacrifice, and the triumph of love, all within the pages of a children’s book. It won her the first of two Kate Greenaway awards. Two years before, Helpers (1975), had been given The Other Award. A slice of domestic life, it showed the patience and care taken by babysitter George in occupying three pre-schoolers for the day, something new in its recognition that boys too could be child carers. Shirley’s awareness of what happened in real families and her belief that children’s books should reflect the way that their social world was changing continued to be characteristic of her work, particularly in The Tales of Trotter Street series (1980s-90s), which took us into the life of children on a multi-cultural city street. Meanwhile Alfie had appeared in Alfie Gets in First (1981) and went on to become the hero of his own series, demonstrating Shirley’s unique skill at creating unsentimental stories for and about young children that treated them and their carers with understanding, respect and affection. Shirley’s work was always varied. Not long after Dogger, she produced Up and Up (1979), a wordless picture book; and in 1985 came Chips and Jessie (1985), the first in a series in comic book format for those just gaining confidence in reading. Later, she wrote fiction for older children and, alongside the continuation of the picture books for younger children, there was work that was both more identifiably personal and difficult to categorise. My favourite of these is Stories by Firelight (1993), a collection of Shirley’s illustrated poems and stories around the theme of winter which, particularly in A Midwinter’s Dream, draws on cultural references from jazz clubs to Romanesque sculpture. Of course, she will be greatly missed, but her work, an indelible part of the life of so many families, will continue to work its gentle irresistible magic for some time yet.