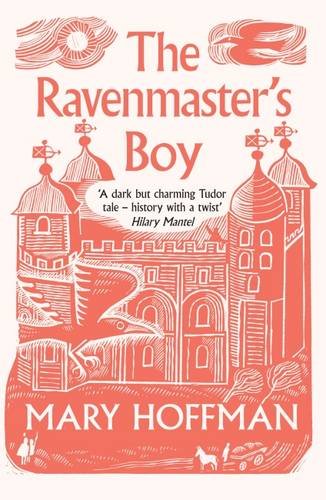 It all began with the opening image. A child, a boy of under seven, so still dressed in skirts, is wedged on a plague cart between the bodies of his mother and father. But he is alive. This horrific scene is replayed over and over again in his nightmares.

Because Ben survives, rescued by the Ravenmaster at the Tower of London. At least he was called Ben right up until just before printing my novel The Ravenmaster’s Boy (2017), when I changed his name to Kit. The ravens were also a part of this story right from the beginning. I had visited the Tower and made friends with the current Ravenmaster, Chris Skaife, who introduced me to the birds.

And while there I bought a book by the magnificently named Boria Sax, called City of Ravens. That was my first piece of research and made it clear that most of the things we think we know about the big black birds at the Tower are wrong! There is actually no evidence that they were even there before the nineteenth century, in spite of the stories about waiting to lap blood after executions, or fouling the Royal Astronomer’s telescopes in the time of Charles the Second.

Nevertheless I had to have the ravens. So I did what I always do, which is to write a Historical Note at the end of the book explaining what I had invented and what not. I had decided that my hero had to be able to speak Raven. This is not particularly innovative: Charlie Ashanti can speak Lion in Zizou Corder’s Lion Boy trilogy; Harry Potter is a Parseltongue, which means he can speak Snake.

Many heroes and heroines of children’s books have some special gift or skill and this is Kit’s. All this was clear in my mind before I knew exactly when his story would happen and what further historical research I would need to do.

This was as far as I had got in 2013, when I first met the ravens. But shortly afterwards I realised that I had to tackle one of the best-known stories from English history: the downfall and death of Anne Boleyn.

This well-worn path had been recently cleared and reopened by the innovative novels of Hilary Mantel: Wolf Hall (2009) and Bring up the Bodies (2012). I was a huge fan of the books and later the stage and TV adaptations. They pointed me in the right direction for research and made me narrow down the period for the setting of The Ravenmaster’s Boy to January to May 1536.

In other words, it traces the extraordinarily rapid decline in Anne’s fortunes. We see her when she is still in favour with the king, shortly after Katherine of Aragon’s death but in a few short months she is in the Tower of London awaiting her trial. By mid-May, she is dead.

most of the things we think we know about the big black birds at the Tower are wrong! 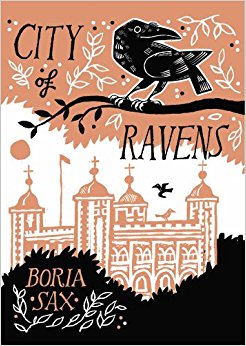 My first piece of research, the book City of Ravens
How could Kit and the ravens help poor Anne Boleyn though? How could Kit’s special skill be used to save her? Well, the short answer was that they couldn’t. It’s one thing to have ravens living at the Tower centuries before we know they did. It is quite another to change the course of English history. I wasn’t writing the kind of alternative history you find in Robert Harris’s Fatherland (1992).

How to get over that problem led to the crux of the plot. Kit and the ravens couldn’t save Anne but they could save someone else, someone we didn’t even know was in danger. That would work. But in the course of the story we had to meet some extremely well-known characters: Anne Boleyn herself, Henry the Eighth, Thomas Cromwell and Thomas Wyatt. What more is there to be said about these people? The answer for me was for us to see them through Kit’s eyes. He hasn’t read the history books that we have, or the novels, or seen the films and plays.

Kit meets the king twice and the doomed queen many times and quickly becomes her champion, her ‘Raven knight’ as she calls him. My intention was to show her and the other characters as they appear to Kit. Remember that this was before Henry became a tyrannical narcissist and before anyone knew he would end up marrying six times in his quest for a legitimate male heir.

In the course of the story, the king’s personality begins to change, starting that downward slide into intransigence and obesity. Many people now believe that he had a personality change after a fall from his horse in late January 1536. But most of the characters in my book have not caught up with that. They remember Henry as a golden boy, an athletic all-rounder, writer of music and poetry, a true Renaissance man.

And they remember the old Queen Katherine and the enormous efforts the king made to disentangle himself from her in order to marry his new love. Under the new version of the king, who becomes arbitrary and unpredictable, these are dangerous views to hold, as Kit’s new parents are aware. In the rush of arrests that Spring, everyone is walking on eggshells, and to champion the queen is a very perilous path to take.

My method for writing historical novels is always the same and probably stems from the fact that I have an English literature degree and gave up the study of history at fourteen. I create a bibliography from references found online or in other books, buy some core titles and get others from the wonderful London Library of which I am a Country Member.

In the course of the story, the king’s personality begins to change, starting that downward slide into intransigence and obesity.
I make copious notes, draw family trees and create timelines, all before writing a word. My husband describes this stage as my being like a dog turning round and round in its bed before settling down. When I do ‘settle down’, I go rather quiet, writing sustainedly every day until I have a continuous first draft.

I then follow up all the notes I made while writing: small details that I need to check but don’t want to spoil the flow by breaking off and checking at the time. The second draft should be in good enough shape to show to someone, an expert whose opinion I value. For Troubadour (2009) I found a Swedish expert on trobairitz (female troubadours), Shakespeare’s Ghost (2016) was read by Shakespeare and folklore scholar Dianne Purkiss, and for The Ravenmaster’s Boy I was lucky enough to secure Hilary Mantel.

She had kindly offered to read it and, when it was in a state that it could be sent to her, said that if she liked it she would give me a quote I could use. This now proudly sits on the cover of the book:

The Ravenmaster’s Boy is a dark but charming Tudor tale – history with a twist. The events of May 1536 – the days of the fall of the Boleyn regime – are still cloudy and mysterious, and it is possible that the birds of the air know as much as the rest of us about what really happened and why.

And that cover carries a specially commissioned illustration by Joe McLaren, whose work I first came across on the cover of Boria Sax’s City of Ravens!

I do find that a lot changes between the first glimmer of an idea and the finished copy of the book. My correspondence with Hilary Mantel and her gentle query over the name Ben made me rethink what my protagonist should be called. I had intended it to be short for Benedict but the average reader might think first of Benjamin, for which that shortening wasn’t common until later. So Kit he became.

And looking back over documents on my laptop in order to write this article, I discover that an early synopsis suggested it be the first in a series and for 8–12s. Both those rather crucial points have changed. I made Kit older than originally conceived and once I had thought of my rather magical realist ending, it was clear that his book had to be a standalone. [Recommended age is given by the publisher as 14+.]

I’d still love to write a series for younger readers on the six wives of Henry the Eighth but the ravens belong specifically to this novel and will now return to their sleeping quarters at the Tower, where I shall continue to visit them from time to time and indulge my fascination for these clever, glamorous birds.

Mary Hoffmann has written well over a 100 books for children and teenagers and a few for adults too. Her picture books including the best-selling Amazing Grace (2014) and its sequels. Her historical novels are The Falconer’s Knot (2007), Troubadour (2009), David: The Unauthorised Autobiography (2016, adult), Shakespeare’s Ghost (2016) and The Ravenmaster’s Boy (2017). She is a founding member of the blogging community The History Girls
Works cited