Lucy Boston (1892–1990) was one of the writers whose work created what has sometimes been termed ‘the second Golden Age of Children’s Literature’.

During the 1950s, a remarkable number of distinguished writers, such as Philippa Pearce, Alan Garner, Rosemary Sutcliff and William Mayne, together with Boston, showed that literature for the young could equal in quality that written for adults. But if you look Boston up on the internet you will find as many references to her creative and original patchwork as to her Green Knowe novels: this combination of handicraft and creative writing surely makes her a most appropriate subject for this issue of IBBYLink. 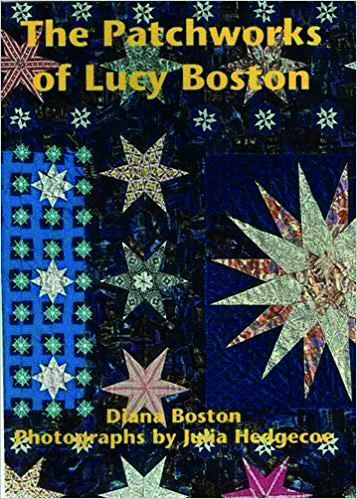 The sequence of novels takes as its setting the manor house in the fenland village of Hemingford Grey. Shortly before the Second World War, Boston bought this ancient property, which is one of the oldest inhabited dwellings in England. As well as spending time and money restoring it, she created what can justly be described as its own mythology, featuring stories about children from the house’s imagined past. These children are encountered by Tolly, the great-grandson of the fictional mid-twentieth century owner, Mrs Oldknow, when he stays at the house Boston named ‘Green Knowe’.

After Lucy Boston’s death in 1990, her daughter-in-law Diana (the wife of Lucy’s son Peter who illustrated her books) not only opened the house, by appointment, to those interested, but also published a collection of reproductions of 22 of her mother-in-law’s needlework creations, entitled The Patchworks of Lucy Boston (1995). The second volume in the series was The Chimneys of Green Knowe (Faber, 1958). The book features patchwork as the craft favoured by Tolly’s great-grandmother, Mrs Oldknow. The old lady also uses the pieces of material with which she is repairing an ancient quilt as stimuli for the stories she tells Tolly. These stories feature a blind girl, Susan, and Jacob, a black boy brought home from his voyages by her sailor father, Captain Oldknow. The patchwork materials are derived from the clothes and furnishings belonging to the people who dwelt in the house during the late eighteenth century, and some of them also serve as a concrete illustration of the racism manifested towards Jacob (though Boston’s treatment of this subject inevitably reflects the period in which the book was written). A related artefact which also has a structural role in the story is a picture of the house embroidered by Susan’s mother, Maria Oldknow. 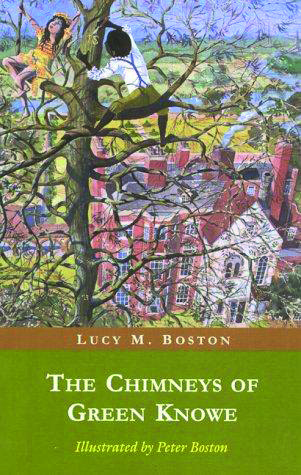 Structure of the novel

Chimneys is the second in the Green Knowe series, and when Tolly goes there for the Easter holidays, he expects to meet Toby, Linnet and Alexander, the seventeenth-century children whom he encountered in his Christmas visit to the house. But the painting which evoked their presence is away at an exhibition, replaced on the wall by a representation of the house as it was in the eighteenth century – embroidered by the then Mrs Oldknow, Maria, using hair from the family and servants of that period.

In her own sewing, twentieth-century great-grandmother Mrs Oldknow is repairing ‘one of the old patchwork quilts [that] were used as curtains’ (p.15), and beside her is a basket containing cut-out pieces of ‘bright cotton materials’ (p.16). Not only does she explain to Tolly the link between each of the pieces and the relevant members of the family, but she also conveys something of their characters: Maria ‘was a vain and silly woman’ (p.17) and the footman Caxton, whose yellow and black apron provides some other pieces, ‘was a nasty man’ (pp.17–18). Tolly locates a piece of bed curtain belonging to the blind girl, Susan, by using the ‘magic’ of spreading his fingers on the cloth and calling her name. But the wearer of the ‘bright emerald green and scarlet’ pieces of a thick material remains at that point a mystery to him and to the reader. Thus Boston creates the expectation that Mrs Oldknow will assuage our and Tolly’s curiosity – the patchwork provides a framework for the novel. A key point of the narrative is Mrs Oldknow’s story about the green and scarlet pieces of material, which derive from clothes made for Jacob on the orders of Susan’s brother Sefton, in malicious imitation of the ‘green coats and red trousers’ (p.81) worn by the monkey belonging to an Italian man playing the ‘hurdy gurdy’ (barrel organ). The black boy puts on the suit, but Nanny Softly is aware of how Sefton is ridiculing him. Nanny is however more indignant about the indecency of the suit having a hole at the back for a monkey’s tail than about the cruel joke at Jacob’s expense. He is soon provided with clothes which are ‘proper’ in all senses, the monkey clothes being given to the poor, but the tailor’s surplus material has provided the pieces Tolly has seen in the quilt. 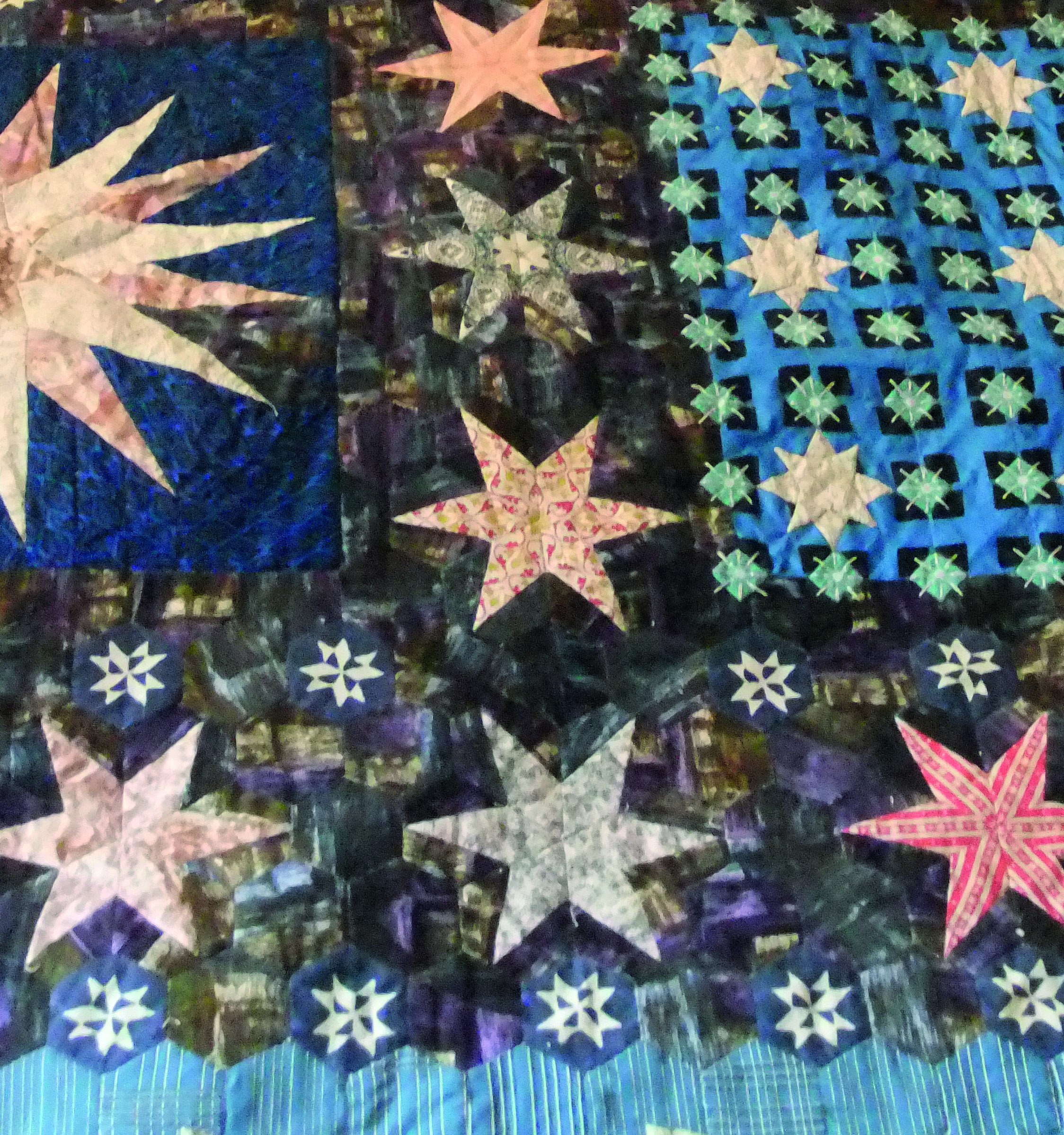 The other artefact relating to the story is created by Susan’s mother, Maria Oldknow; when her jewels go missing after a fire destroys the newer part of the house, a gypsy tells her that to recover them she must embroider it, using hair obtained from each of its occupants, reciting every time she inserts the needle the words, ‘Great Moloch, Lord of Fire, put a pearl on this point’ (p.172). The picture provides the stimulus for Tolly finding the jewels, stolen by the dastardly footman, Caxton.

I am using the term metonymy, less familiar than metaphor, because the pieces of cloth which serve to illustrate something about the characters associated with them are indeed ‘there’ as far as the novel is concerned. I think Boston’s work is ‘magic realism’ rather than fantasy as such: as the critic David Lodge observes, ‘Realistic fiction relies principally upon symbolism … in which the primary signified is introduced into the discourse according to the metonymic principle of spatial or temporal contiguity’ (1981: 22–23). Here we see how parts of the wearers’ clothes both remind us of what people actually wore in the past, and either directly or indirectly represent their personality or, in Jacob’s case, something of how they were treated. Thus pieces from the clothes of Caxton the footman (whose hostility could be said to resemble a marauding insect) lead Tolly to say, ‘like a wasp’. The personality of Susan’s unpleasant brother Sefton is indicated by the number of patchwork pieces from his clothes – his fine shirt, his dressing gown for lounging in, his riding coat with a primrose lining. The vanity of Maria’s character too is signified by the abundance and quality of her clothes. By contrast, Jacob’s character certainly does not metaphorically resemble the clothes associated with monkeys that he is forced to wear; rather these clothes signify the way he is regarded, especially by the hostile Sefton.

Probably the most obvious way in which Boston uses metonymy is in portraying great-grandmother Oldknow as both literally assembling a patchwork of pieces from the past and a storyteller who performs the same process with the stories that comprise the novel. Inevitably, in doing so, she also becomes a figure for the author Lucy Boston herself and the creative process in which she is engaged – thus Boston was a patchwork creator in more ways than one. In Lodge’s terms, this is an instance of ‘metonymic signified I [the patchwork creation] metaphorically evok[ing] signified II [the story]’ (1981: 22–23).

As indicated above, Boston introduces the character of the black boy Jacob by reference to the lurid colours of the ‘monkey-suit’ that Susan’s unpleasant brother Sefton provides to ridicule the boy. But this trick instead creates a negative reaction against Sefton’s racist attitude. Although Captain Oldknow has explicitly ordered that the boy be well treated (p.64), Sefton intends to expose Jacob to ridicule when he wears the suit; at the same time this incident also reveals both the boy’s endearing respect for the Captain and his desire to fit in:

Jacob went up to his room … to put on the clothes that were going to make him like everybody else. It was a solemn moment for him. But the suit was not at all what he has expected, not like English boys’ clothes. However, he was sure the Captain would give him what was right …. (p.83)

A further attempt to demean Jacob occurs when Sefton is out shooting and claims to have ‘winged a mallard’ which may have fallen down one of the chimneys. Despite Jacob’s reluctance, Sefton sends the boy up the soot-laden chimney to look for it, telling him,

‘You’re the right colour already. Why, it won’t even show. You won’t have to wash afterwards, if it’s washing you don’t like.’

They seized him as if it were a great joke and frog-marched him into the house, Sefton laughing and showing his splendid teeth, and his friend sniggering ….

The language, including a little later the use of the ‘n’ word, makes it very evident that Sefton is in the wrong. Boston is enlisting the child reader’s sympathies towards Jacob and showing the evil of Sefton’s attitude to him – enhanced, no doubt, at this point only 11 years after the end of the Second World War, by the similarity of the young man’s behaviour to that of the Nazis.

Perhaps it is inevitable that a book written more than 60 years ago and touching on the always tendentious subject of the portrayal of black characters should seem somewhat politically incorrect from today’s perspective. Jacob’s position as an outsider to the traditionally English heritage of Green Knowe is emphasised by his stereotypical inability to speak English grammatically, despite presumably having been taught it by the standard-English-speaking sea captain. His characteristic inability to master the syntax of English verbs is displayed in all his utterances, typically when he objects to being sent up the chimney in search of the bird that Sefton claims to have shot: ‘I stay look after Miss Susan. Captain say I not your servant. I not go up chimney’ (p.100). It is unsurprising that at the end of the novel Tolly learns that Susan goes on to marry her tutor Jonathan, despite Jacob’s important role in her happiness and the many exploits they have shared. Neither Mrs Oldknow nor Tolly make any comment about the fact that Jacob, as she narrates,

chose himself a wife from his own people, and brought her back with him. And he lived happily too. His wife was Nanny to Susan’s children, and he and Susan were devoted friends. As for the children, whether black or white, they could never leave him alone. He grew into a very big man, and they loved him as much as you would love a gentle, playful lion. (pp.185–186)

These are the final words of the novel, but rather than seeing them as indicating that Boston would have deprecated ‘a mixed race union such as this [Susan and Jacob]’ as Dulcie Pettigrew (2011: 55) suggests, I think that they merely reflect Boston’s mid-twentieth-century unquestioning acceptance of the then current view of eighteenth century mores. There are certainly limitations in Boston’s view of heritage, which, as Clive Barnes (2011: 43) indicates, ‘was coloured by a sense of class and intellectual superiority and ownership,’ but I don’t think that these lessen the value of the books. Although they portray the ‘other’, such as Jacob here and the Chinese boy Ping in The River at Green Knowe (1959), as outsiders, these outsiders are shown as deserving of respect. The books can in fact be seen as an early contribution to the process of understanding what might be termed the ‘patchwork’ of our society, both in the past and today.

Barnes, Clive (2011) ‘Where you belong is what you are’: aspects of heritage, identity, class, magic and childhood in Lucy Boston’s Green Knowe novels. Journal of Children’s Literature Studies, vol.8, no. 3: 22–46.

The Patchworks of Lucy Boston at The Manor, Hemingford Grey. https://dovegreyreader.typepad.com/dovegreyreader_scribbles/2014/06/the-patchworks-of-lucy-boston-at-the-manor-hemingford-grey.html.