One Story Many Voices 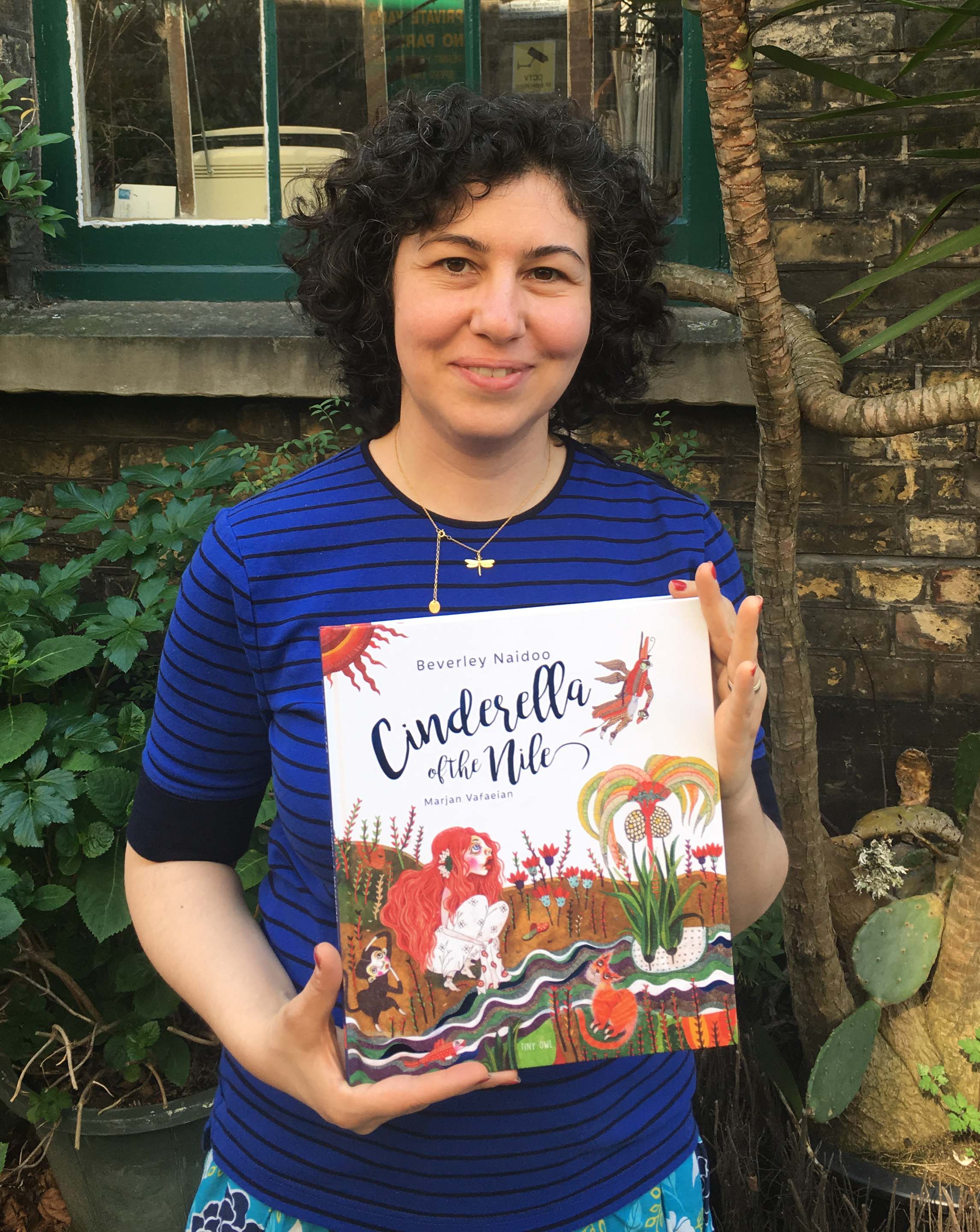 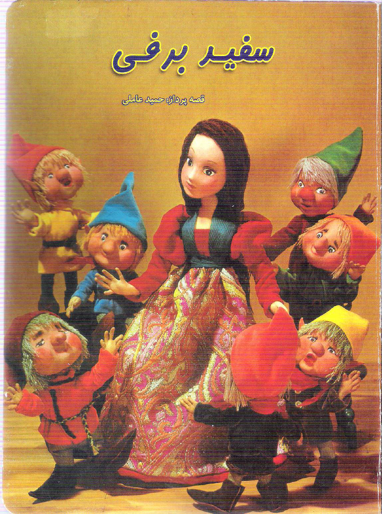 An Iranian edition of Snow White and the Seven Dwarves

I grew up in Tehran in the 1980s during the Iran-Iraq war. It was a scary time but I always remember the safety I felt when my mother used to read me bedtime stories at night. I loved it when she read my beautiful hardcover copies of Hansel and Gretel, Cinderella and Snow White. They transported me to different worlds where good always prevailed. My father, on the other hand, would make up stories to lighten our moods – you never knew what yarn he might spin or where it might go! But it was my grandma who would tell me stories from the past, stories told by her mother and grandmother.

My favourite story was “The Sea Pony”. My grandma would start the story of the little boy and his sea pony, but then she’d stop midway! She only remembered the beginning of the story and I always wondered what happened next. How would the boy and the pony overcome their problem? She used to sigh and say “My grandma knew many stories and she told me all of them, but now I have forgotten.” Now that my grandma has passed away, I don’t remember the name of the boy, or what problem he had to overcome. All I remember is the name of the story, and how much I loved it.

My grandma told me all sorts of stories: rhymes, funny folktales and, of course, fairy tales. It was only later that I recognised some of these fairy tales as versions of the ‘Western’ tales I knew so well. At the time, I didn’t realise that the story of the poor man in the woods with his three daughters was another version of Hansel and Gretel, or that “Mah Pishooni” was the Iranian Cinderella, and “Namaki” was The Beauty and the Beast. It made me realise that stories are dynamic. They travel like people and food. They change in their new home and adapt to their environment. Reading or hearing different versions of the same story is like finding a common language between cultures.

Mah Pishooni is the Iranian Cinderella. She is made beautiful by a witch because of her kindness. The witch makes her stepsister ugly because she’s so rude. Mah Pishooni attends a royal party in disguise and the prince falls in love with her. She runs back home when she realises it’s late and she has unfinished chores to do, and loses one of her shoes.

Namaki is a young girl who forgets to lock all seven doors of her home. A beast enters through one of the open doors and asks for food and a place to sleep for the night. In the morning, he demands to take Namaki home with him. Her mother says “Namaki, you were responsible for locking the doors, now you have to go!” In the beast’s home, Namaki finds a bottle that holds his life and eventually they fall in love.

There is something magical in the way stories have travelled across time and cultures. During antiquity, ideas, themes and stories coursed through the Silk Road spread by merchants, travellers and pilgrims. 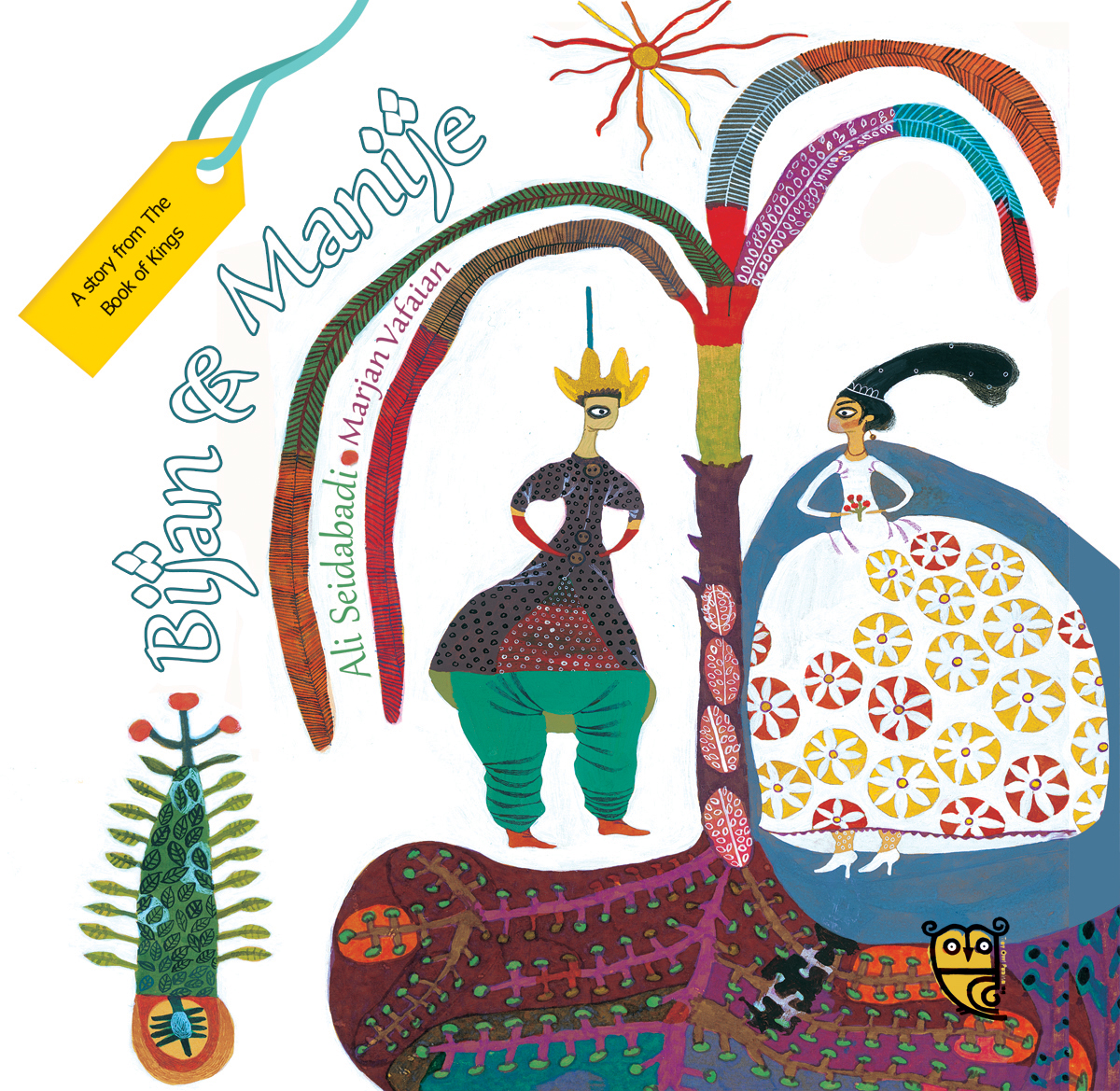 Bijan and Manije from Shahnameh (The Book of Kings) by Ali Seidabadi, illustrated by Marjan Vafaeian (Tiny Owl, 2016)

There is something magical in the way stories have travelled across time and cultures. During antiquity, ideas, themes and stories coursed through the Silk Road spread by merchants, travellers and pilgrims. An ancient network of trade routes that were for centuries central to cultural interaction between East and West, the Silk Road connected Asia with Africa, the Middle East and Europe. It is said that the Ramayana, an epic Sanskrit poem, owes a debt to the Iliad and to the Odyssey whilst the Aeneid may have been influenced by the Indian texts such as the Mahabharata. In the Persian poet Ferdowsi’s epic work Shahnameh (The Book of Kings), we can find stories that are strikingly similar to Romeo and Juliet, Rapunzel and Snow White. So I like to think that our fairy tales also come from this ancient network of people, places and ideas. We have Cinderella stories from China, France, Germany, England, Iran, India, and Egypt; Snow White stories from Iran, Ireland, Italy, Gabon and India; Jack and the Beanstalk from Scotland, Norway, Greece and Russia – to name but a few!

One of Iran’s most prominent poets Hafez says, “There is only one story of love and many narratives of that same story; still it is new whenever I hear it”. The same themes of good versus evil, love, jealousy, and hope permeate across cultures. Stories connect us; they remind us that we are not so different after all. Yet some of our best-known fairy tales have been co-opted by the big screen and cultural variants are little known. We wanted to create a series that paid homage to our shared global heritage and that celebrated the diverse and colourful world that we live in.

One of Iran’s most prominent poets Hafez says, “There is only one story of love and many narratives of that same story; still it is new whenever I hear it”. The same themes of good versus evil, love, jealousy, and hope permeate across cultures. Stories connect us; they remind us that we are not so different after all. 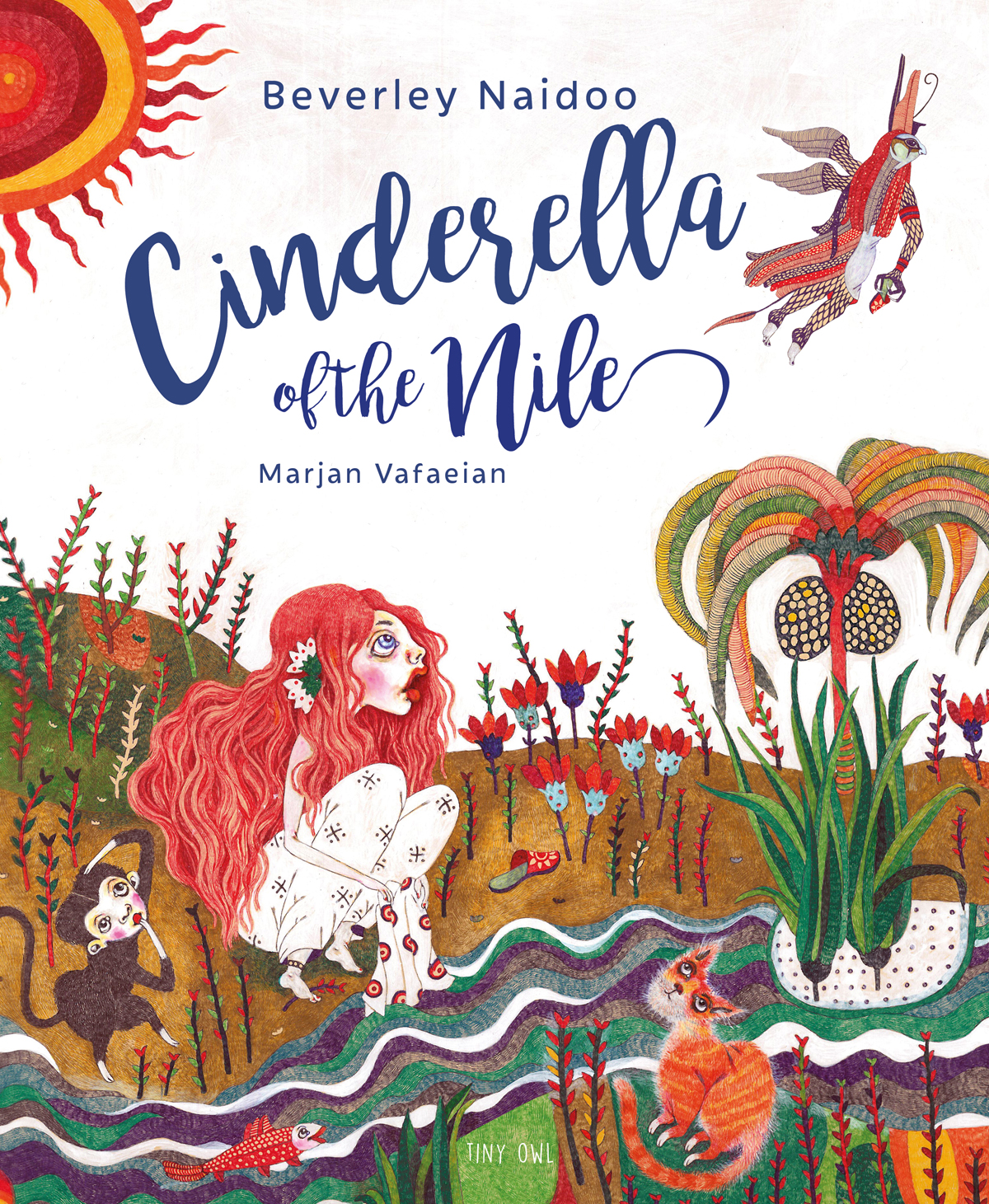 Cinderella of the Nile, Beverley Naidoo, illustrated by Marjan Vafaeian (Tiny Owl, May 2018) 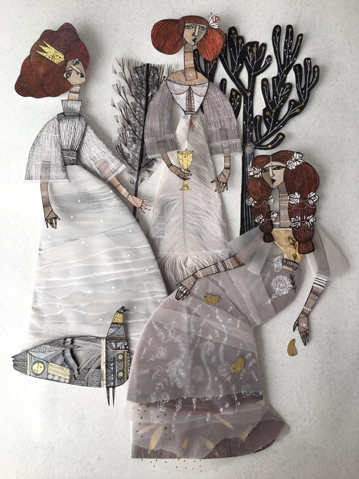 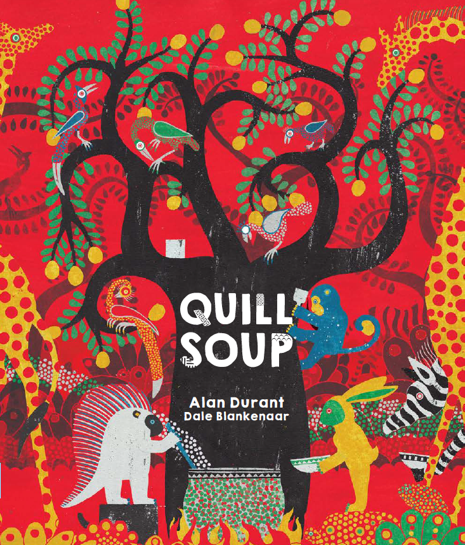 The first book in our One Story, Many Voices series is the epic tale of Cinderella. Beautifully retold by the award-winning author Beverley Naidoo, this earliest known version of Cinderella is set in Greece and Egypt. Rhodopis is a Greek girl who is sold into slavery by bandits and taken to Egypt. Her master gives her a pair of beautiful rose-red slippers, making three other servants jealous. Horus, the falcon, sweeps in to steal her slipper, which leads Rhodopis to the King of Egypt. Cinderella of the Nile (May 2018) is beautifully illustrated by Marjan Vafaeian who brings a unique perspective to the story inspired by ancient paintings from Egypt.

Our second fairy tale is The Phoenix of Persia (April 2019) written by storyteller Sally Pomme Clayton. This story is from Shahnameh and tells the story of Prince Zal who is born with the fairest skin and white hair. His father banishes him to the forest where he is adopted by a Simorgh, a benevolent and mythical bird which finds its parallels in the phoenix of Greek mythology and the firebird of Slavic folklore. With echoes of Snow White, this fairy tale is a story about forgiveness, the power of love and celebrating difference.

Our next fairytale is The Twelve Dancing Princesses (September 2020) by Jackie Morris, illustrated by Ehsan Abdollahi. Versions of this tale can be found in Turkey, India, Russia, Hungary and Scotland. Jackie’s haunting retelling is a fresh interpretation of the beloved Brothers Grimm fairy tale about twelve princesses who, though locked up every night, wear-down their dancing shoes much to the King’s dismay. Jackie’s dark and poetic text subverts the ending and reminds us that fairy tales change over time and for modern day audiences. Ehsan Abdollahi’s unique illustrative style in rich and delicate detail brings the story to life and perfectly encapsulate the beauty and melancholy of the story.

We are also publishing two folktales as part of the series: Quill Soup (May 2019) is a South African version of Stone Soup by Alan Durant, illustrated by Dale Blankenaar. In varying traditions, the stone has been replaced with other common inedible objects but our story sees Noko, the porcupine, make soup from his quills and who, through his charm and ingenuity, finally convinces the rest of the animals to share their food in order to make a meal that everyone enjoys. Miss Bandari’s Golden Heart (September 2020) by Sufiya Ahmed is a story she remembers her own grandmother telling her as a child. This traditional Indian tale of The Monkey and the Crocodile also has variants in other countries, including a Swahili version which features a shark instead of a crocodile.

As I remember my grandma’s stories, I feel a responsibility to keep them alive by telling them to my own children. As a publisher, I feel even more responsible to publish books so that children can celebrate the many voices in this world – and who will love them as much as I loved my grandma’s stories.

Tiny Owl was initially set up in response to the lack of children’s books that reflected the culture of its co-founder Delaram Ghanimifard. She wanted her sons to experience stories from home and appreciate the beautiful and diverse artistic heritage of Iran. Since 2015, Tiny Owl has published 17 books that celebrate the rich literary heritage of Persian culture and its collaboration with contemporary artists from Iran showcases the unique illustrative styles coming from the region. As Tiny Owl spreads its wings, it is now publishing books from around the world to broaden perspectives and introduce artistic and literary traditions from diverse viewpoints.