Moonstruck! Poems About Our Moon 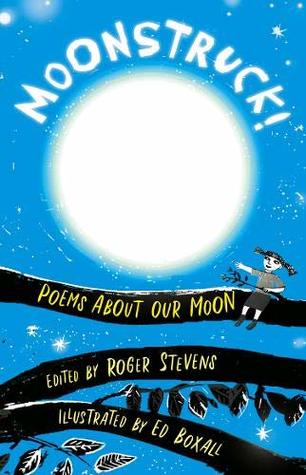 This anthology is another ‘stuff in your schoolbag’ poetry book from the Otter-Barry series that encourages children to read and share poetry.

The series is printed on recycled paper and apart from the cover, all illustrations are in black and white.

From those readers who have followed this series, you may remember I Wish I Had a Pirate Hat by Roger Stevens, the editor here. In Moonstruck! he is the only poet with more than a single poem. In his poem ‘The Eagle Has Landed’ he imagines he is Neil Armstrong:

Did I feel nervous? …
Our chances?
Fifty-fifty we would land. …
So, was I nervous?
Yes. I’d say.
…
While Michael orbited the Moon
We took the lunar module down
On to that tranquil sea. …
…
And should you ever visit it
These words you’ll find …
We came in peace, for all mankind.

A brief description of the historic event is given in a note on the following spread.
Brian Moses also take up the same theme in ‘To the Moon’:

It has been just the luck of a privileged few
to walk on the moon and look back at the view,
to stare at the planet they left behind
and wonder if anything else they could find
would ever be so quite so breathtaking as this,
no fast car ride, no daughter’s kiss, …

The poet ends with a pertinent question – thought provoking.

Alongside well-known and not so well-known modern poets, we are reminded of poems that have stood the test of time such as Percy Bysshe Shelley’s ‘To the Moon’, W.B. Yeats’ ‘The Cat and the Moon’; Henry Wordsworth Longfellow’s ‘The Harvest Moon’; and Lady Mary Wortley Montague’s ‘Hymn to the Moon’. My favourite is Amy Lovell’s that starts:

Slipping softly through the sky
Little horned, happy moon,
Can you hear me up so high?
Will you come down soon?

The illustration is a crescent moon with a young lad lying hugging the lower end and a cat peering over the top. Inside the crescent is a full moon in the distance and below are plants. A lovely evocation of the words.

Traditional poems are represented by ‘The Man in the Moon’, a traditional American children’s moon tale, the man in the moon also being remembered by other poets. ‘Moon Poem of Nadi Children’ is a traditional chant from Kenya. 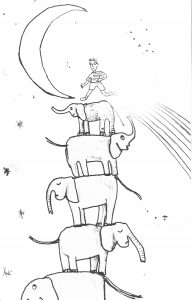 Harisha Dash’s poem ‘The Delicious Side of the Moon’ delights in cake, vanilla wizz, coconut, pancake, burger and sausage, but ends with a scolding. And, of course, the illustration shows a banana.

Poems are very varied. Some address the moon, as the poem by Amy Lovell, and Lee Brownlee’s ‘Questions to Ask the Moon’. Others let the moon speak, e.g. James Carter’s ‘The Moon Speaks!’. This poem is written in the shape of a full moon with beginning words in bold to make a crescent moon. There is a riddle poem, Debra Bertulis’ ‘What am I?’ , descriptions of the moon in the various seasons, mostly winter, e.g. John Rice’s ‘The Moon and the Frost’, and plenty of humour, e.g. ‘The First Woman on the Moon’ – Mabel Greensmith – by Bernard Young:

She went up there in a dream
in 1959 …
…
Though it’s a shame she didn’t leave a slipper
or one of her rollers up there
for Neil Armstrong to discover. … 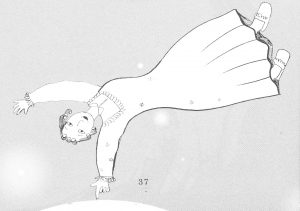 Illustration for ‘The First Woman on the Moon’. Copyright © 2019 Ed Boxall.

The saddest poem is Andrea Shavick’s ‘The Wish’:

I was so near, I had to try…
I took the ladder from the loft
I rowed the boat far out to sea
I there it hung so bright and soft

I leave you to read the sad ending. The illustration depicts the girl starting to climb the ladder, its foot in the boat and its top resting on the moon. A cat sits on the side of the boat and dolphins play in the surrounding sea. Again just the right illustration showing the girl’s wistful glace upwards.

I can’t do justice to this book so I can only tell you to buy it and enjoy it for yourself and give it to all the children around you – plenty of quotes for them to enjoy and short poems to learn by heart.