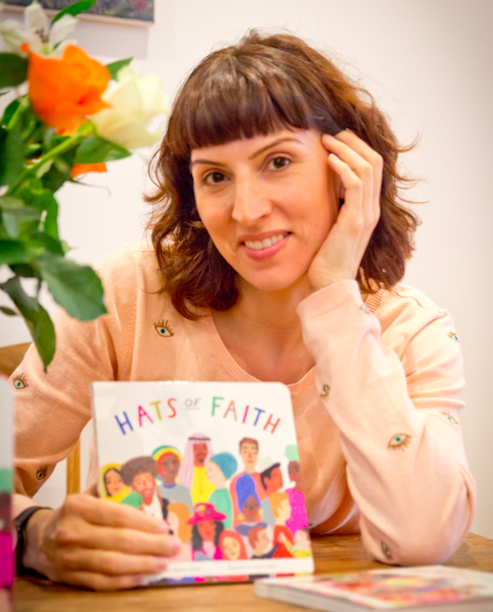 A blog post by Medeia Cohan, author of Hats of Faith (Shade 7)

When my son was about 2 years old I went looking for interesting books that would introduce him to the real world. Books that featured characters that didn’t just look like him but looked like the world beyond our front door. I wrote Hats of Faith because it didn’t exist. I felt and still feel that in this time of increased intolerance and faith and race-based hate crimes, the world really needs more accurate, factual, mainstream publications that celebrate diversity and interfaith subjects. Hats of Faith was born from a desire to contribute to this movement in a meaningful and impactful way. To do my part to make the world a little bit more informed and therefore more understanding and hopefully kinder.

The more I spoke about the idea with other parents, the more I kept hearing stories of children reacting badly or making embarrassing gaffs when they’d encounter someone in a head covering and parents not really knowing what to do in these situations.

I believe that encounters with people not like us, is the perfect moment to not shy away, but engage and discuss tricky subjects and learn from each other. And as a parent, I feel obligated to dissect subjects like this with my son, so that he’s informed and unafraid.

I also kept hearing stories from people who covered their heads but never get to see themselves in mainstream books and the impact that had on them. Leading characters in most mainstream publications are not head covering nor do they feature children of other skin tones or abilities.

Stories like these fuelled my belief that children aren’t getting important interfaith and diversity education early enough in life and that it’s the lack of familiarity that leads to fear and ultimately negative views of the unknown. I felt a huge obligation to play an active role in educating children and giving them the tools to be unafraid, curious and informed and thus more understanding and kinder.

The book took a year in research alone and I started thinking I’d bitten off more than I could chew. But when the illustrations by the lovely and talented Sarah Walsh arrived in my inbox and I could see the book coming to life I was spurred on. Since the book has come out the response has been tremendous with support coming from around the world from parents, educators, publishers and most importantly children! People of all ages seem to love it and we often hear from adults how they’ve learned from it alongside their little ones which probably my proudest achievement with the book.

In addition to the book we now have T-shirts featuring the characters in the book, a free downloadable education kit to support parents and educators with expanding the conversation, and our hugely popular UK wide school assembly tour which has been bringing the book to life in primary schools across the country for the last 18 months. Our plans for the future include more of the same. We are keen to expand our reach and continue to find ways of educating and expanding minds.