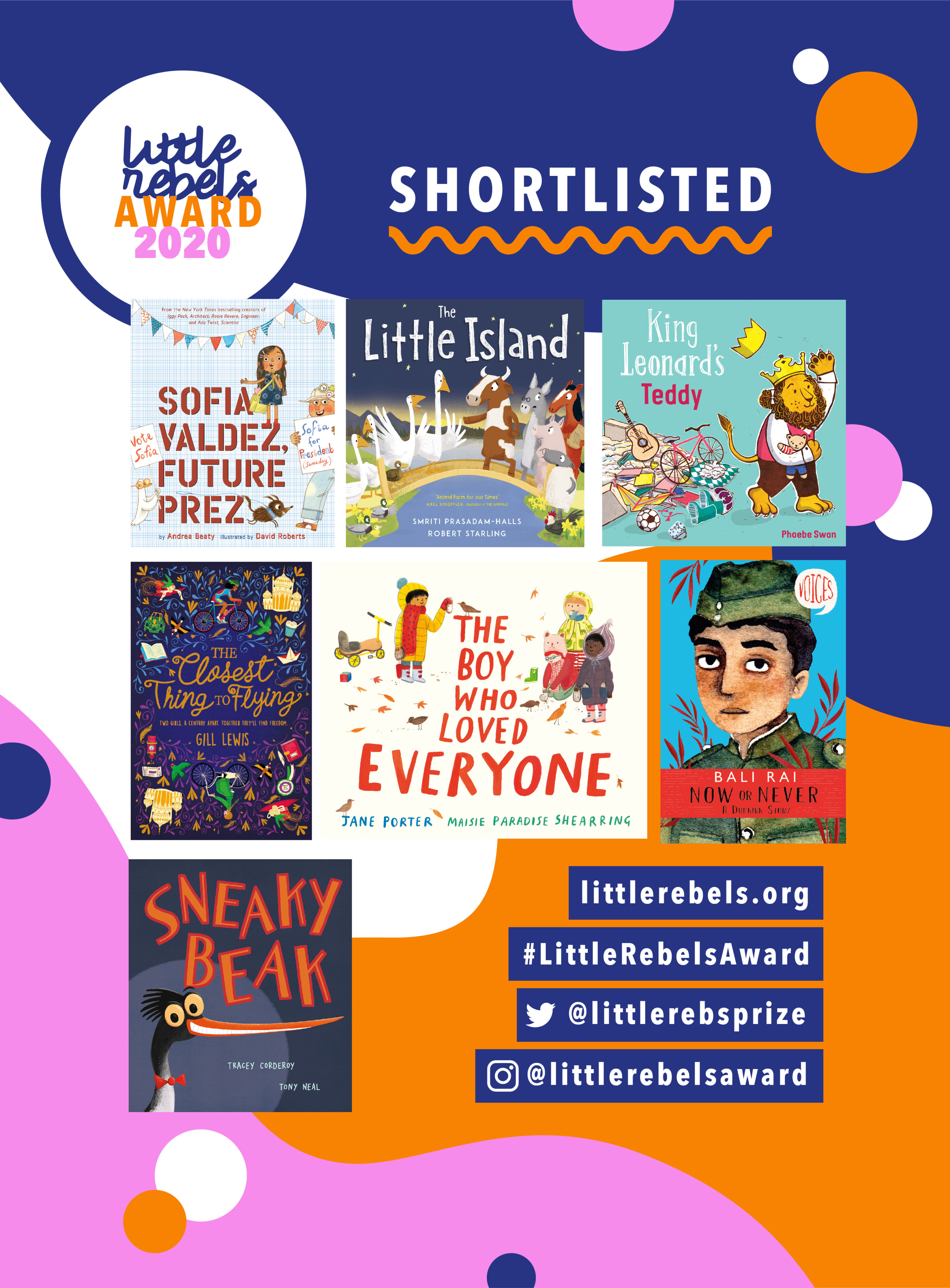 Boundless kindness, domestic violence, excess consumerism, sustainability, untold histories and a Brexit fable are all on the agenda for this year’s Little Rebels Award for Radical Children’s Fiction.

Gill Lewis is shortlisted for the fifth time in the award’s eight year history for The Closest Thing to Flying, and Andrea Beaty and David Roberts make the list for a second time with Sofia Valdez, Future Prez.

The Little Rebels 2020 shortlist in full:

The Boy Who Loved Everyone by Jane Porter, illustrated by Maisie Paradise Shearring (Walker)

Now or Never – A Dunkirk Story by Bali Rai (Scholastic)

The Closest Thing to Flying by Gill Lewis (OUP)

The Little Rebels Award celebrates children’s fiction which challenges stereotypes, promotes social justice and advocates for a more peaceful and fairer world. This year for the first time the award received funding from the Barry Amiel and Norman Melburn Trust and the winner will receive a cheque for £2000.

Picture books dominate the 2020 list. Sneaky Beak offers up a playful challenge to the pitfalls of consumerism, as a hapless bear finds himself unable to resist Sneaky Beak’s marketing savvy but finds that a Crunch-O-Matic Granola Maker may not truly be the path to happiness. In King Leonard’s Teddy, meanwhile, a lion king with an endless appetite for new possessions carelessly discards toy after toy – but when his beloved teddy needs repair, he discovers the value of reusing, repairing and recycling, and abandons his crown to open a community café and repair shop.

In Sofia Valdez, Future Prez, the resourceful Sofia decides its time for a local rubbish dump to be turned in to a park, and her quest takes her all the way to City Hall. The result is a shared community space that can be enjoyed by all. The Little Island also explores the value of community and shared spaces, as an enclave of island-dwelling geese suddenly decide they might be better off cutting ties with their farm neighbours across the water – but they discover their new isolation is not all they had hoped for. Community is also central in The Boy Who Loved Everyone, which offers up a radical re-imagining of the meaning of love. A young boy called Dimitri who doesn’t hesitate to tell friends, teachers and trees that he loves them, but rarely hears it back, discovers the surprising and unexpected forms of expression that love can take.

Two chapter books made the list. Now or Never – a Dunkirk Story explores the overlooked history of the Indian soldiers who fought with the British Army in World War II. The book follows a young Indian soldier whose pride in fighting alongside the British is challenged by the racist and classist power structures he encounters. In The Closest Thing to Flying, 12-year-old Semira and her mother, who left Eritrea as refugees, hope to be granted permanent settlement in England- but their temporary home is no longer a place of sanctuary. As Semira bravely navigates their way to safety, she draws strength from the diary of a young, Victorian suffragette and activist

Fen Coles, Co-Director of Letterbox Library, said of the shortlist: “The current pandemic has sharpened so many social justice issues- poverty, domestic violence, the destruction of our environment- but also shone a light on our capacity for great kindness. The latest Little Rebels Award shortlist similarly exposes the fissures in our society alongside an overall optimism and a belief in change. Never has this roll call of social justice books been more useful in giving children tools to make sense of the world and to know that they can be the agents of change.”

The winner of this year’s Little Rebels Award will be announced in September.