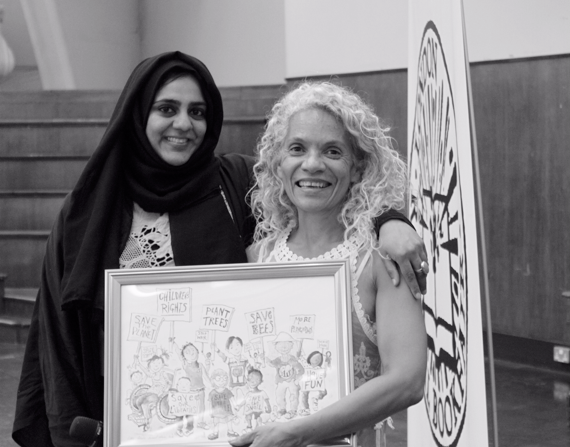 Government propaganda, militarization, misjudged Western ‘aid’ and the UK’s participation in the slave trade are just some of the themes highlighted by this year’s shortlist for the Little Rebels Award for Radical Children’s Fiction.

Small, independent publishers figure strongly on the shortlist, including titles from HopeRoad and Lantana Publishing. Anne Booth makes her second Little Rebels Award appearance (Girl With A White Dog was shortlisted in 2015) and former Little Rebels Award judge, Catherine Johnson, is shortlisted for her historical fiction novel, Freedom, an account of the UK’s role in the slave trade which takes the 1781 Zong Massacre as its cue.

The full Little Rebels Award 2019 shortlist (for books published in 2018) is:

War and conflict are recurrent themes while receiving very different treatments: Across the Divide explores the pacifist movement and the militarization of local communities; picture book, Tomorrow (by Nadine Kaadan who moved to London following the onset of the Syrian conflict), portrays civil war through the eyes of a family forced to stay indoors; The Ghost and Jamal exposes young people as the real casualties of wars and critiques Western charitable ‘interventions’ in conflict zones. Two of the shortlisted titles foreground disabled characters as significant voices and agents: The Ghost and Jamal’s protagonist has epilepsy and AJ’s parents in Running on Empty have learning disabilities. Durrant’s novel, set in Stratford (London), stars a working-class family struggling under the pressure of financial hardship and a welfare system ill-equipped to support them. Picture book, The New Neighbors, hints at themes very familiar to previous Little Rebels Award shortlists -the treatment of refugees and pre-conceptions about new arrivals- while the protagonist of the third picture book on the list, The King Who Banned the Dark, is an autocrat who instills obedience in his citizens through imagined fears.

Fen Coles, Co-Director of Letterbox Library, said of the shortlist: “From a king who bans the dark to a tower block community fearful of the ratty (!) newcomers, the Little Rebels Award shortlist demonstrates again that weighty topical themes can be brought to the youngest minds in ways which are playful, provocative, thoughtful and fun. Social divisions, conflict, the rise in far right parties and ideologies, threats to democratic rule as well as very home-grown human rights abuses such as the Windrush scandal are all ‘live’ topics which children are hearing about through ubiquitous social medias. The Little Rebels titles continue to offer young people and children texts to help them navigate, question and make sense of the fractured world which surrounds them”.

The Little Rebels Children’s Book Award is now in its 7th year. The Award recognises fiction for ages 0-12 which promotes or celebrates social justice and equality. It is run by booksellers, Housmans Bookshop and Letterbox Library and is awarded by the Alliance of Radical Booksellers (ARB). This year’s judges are: author Patrice Lawrence; Emily Drabble, Head of Children’s Book Promotions/Prizes at BookTrust; B.J. Epstein, Senior Lecturer at the University of East Anglia; Darren Chetty, Teacher, Writer, Researcher; Shaun Dellenty, Trainer in LGBT+ inclusive education.

Last year’s Little Rebels Award winner, Zanib Mian, went on to sign a three-book deal with Hachette Children’s Group (HCG) in late 2018. The first book in the series, Planet Omar: Accidental Trouble Magnet, was launched this month and is based on the original The Muslims text. The title has also been sold to PRH’s Putnam in the U.S.

The winner of this year’s Little Rebels Award will be announced on July 10th at an award ceremony, hosted in the Centre for Literacy in Primary Education’s new Literacy Library, Southwark.