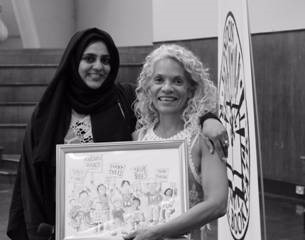 The Little Rebels Award for Radical Children’s Fiction celebrates children’s books for readers aged 0-12 which promote social equality and social justice. The prize is administered by booksellers Letterbox Library and Housmans Bookshop on behalf of the Alliance of Radical Booksellers. Submissions for the Little Rebels Award 2019 are now open and publishers are invited to submit relevant books first published in 2018.

The judges are Patrice Lawrence, award-winning YA author; B.J.Epstein, Senior Lecturer at the University of East Anglia; Darren Chetty, Teaching Fellow at University College London; and Emily Drabble, Head of Children’s Book Promotions/Prizes at BookTrust. This year, the judges will be joined by Shaun Dellenty, Former Deputy Head, trainer in LGBT+ inclusive education and author of forthcoming Celebrating Difference: A whole-school approach to LGBT+ inclusion (Bloomsbury, May 2019).

Shaun Dellenty said, “I am looking forward to being a Little Rebels judge! Ten years of work in LGBT+ inclusion in education has proved the urgent need for a wide range of representative and inclusive children’s fiction that promotes social justice, equality and compassion for human diversity. We must nurture schools in which young people can bring curiosity to their own responses and reactions to diversity; high-quality texts are a vital stimulus for these potentially life changing conversations.”

The winner of the 2018 Little Rebels Award has been nominated for the 2019 Carnegie Medal. Zanib Mian’s The Muslims was published by her own indie publishing company, Sweet Apple Books, in October 2017. Since winning the Little Rebels Award, Zanib Mian has gone on to secure a three-book-deal with Hachette Children’s Group.

Speaking about the success of The Muslims, Zanib Mian said, “Winning the Little Rebels Award catapulted me to places I never dreamt of getting to, in my career! Thanks to the spotlight the award brought – and of course, the support from the amazing panel of judges and the organisers – my book found its way into the hands of people who may not have otherwise discovered it, which led to me signing an agent, securing a 3-book deal with Hachette Children’s Group, being shortlisted for the UKLA awards and nominated for the 2019 Carnegie Medal!”

Full submission guidelines can be found at www.littlerebelsaward.wordpress.com. The closing date for nominations is 30 January 2019. The shortlist will be announced in April 2019 with the winning announcement in early July.
BACK TO NEWS