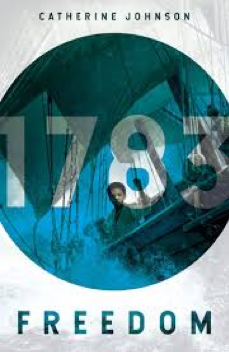 Catherine Johnson wins Little Rebels’ award for her book about slavery and the UK. The book is an extraordinary achievement, telling a complex and challenging story for a younger age group.

A short historical novel, Freedom tells the story of Nat, a young boy enslaved on a Jamaican plantation, brought over to England in the late eighteenth century. Hopeful that, once on UK soil, he will finally be free from bondage, Nat instead witnesses the pivotal role Britain played in building the slavery industry.

“Freedom is radical in a number of ways. It tells a story of a young enslaved man in Britain. It explores the humanity of those whose humanity was denied through chattel slavery. It subtly examines the similarities and the differences between class oppression and a system of slavery rooted in racism. It tells a story of Britain that continues to be neglected. Johnson’s writing is a masterclass in the maxim ‘show don’t tell’ – through the point of view of her protagonist we are brought into his world and yet we are afforded space to emotionally engage with the story she offers us.”

Darren Chetty, Teaching Fellow at UCL and contributor to The Good Immigrant.

“Catherine Johnson brings the horrific history of slavery to life in this important piece of historical fiction for a middle grade audience. A brilliant adventure story that shines a much-needed spotlight on the UK’s role [and which also introduces us to] real life people who should be more famous than they are, including former slave turned author and abolitionist Olaudah Equiano and Shadrack Furman, the first black army Pensioner. A well deserved win from one of the UK’s most fabulous storytellers.”

The winner of the Little Rebels Children’s Book Award 2019 was announced at an event held in the CLPE (Centre for Literacy in Primary Education) Literacy Library on Wednesday July 10th. This followed on from a panel discussion with the other shortlisted authors for 2019. These were Bridget Blankley for The Ghosts & Jamal (HopeRoad Publishing); Anne Booth for Across the Divide (Catnip Publishing); Emily Haworth-Booth for The King Who Banned the Dark (Pavilion Books); Nadine Kaadan for Tomorrow (Lantana Publishing); Sarah McIntyre for The New Neighbours (David Fickling Books).

The Little Rebels Children’s Book Award is now in its seventh year. The Award recognises fiction for ages 0-12 which promotes or celebrates social justice and equality. It is run by booksellers Housmans Bookshop and Letterbox Library and is awarded by the Alliance of Radical Booksellers (ARB). This year’s judges were: author Patrice Lawrence; Emily Drabble, Head of Children’s Book Promotions/Prizes at BookTrust; B.J. Epstein, Senior Lecturer at the University of East Anglia; Darren Chetty, Teacher, Writer, Researcher; Shaun Dellenty, Trainer in LGBT+ inclusive education.

Last year’s Little Rebels Award winner, Zanib Mian, went on to sign a three-book deal with Hachette Children’s Group (HCG) in late 2018. The first book in the series, Planet Omar: Accidental Trouble Magnet, was launched in April 2019 and was based on the original The Muslims text. The title has also been sold to PRH’s Putnam in the U.S.