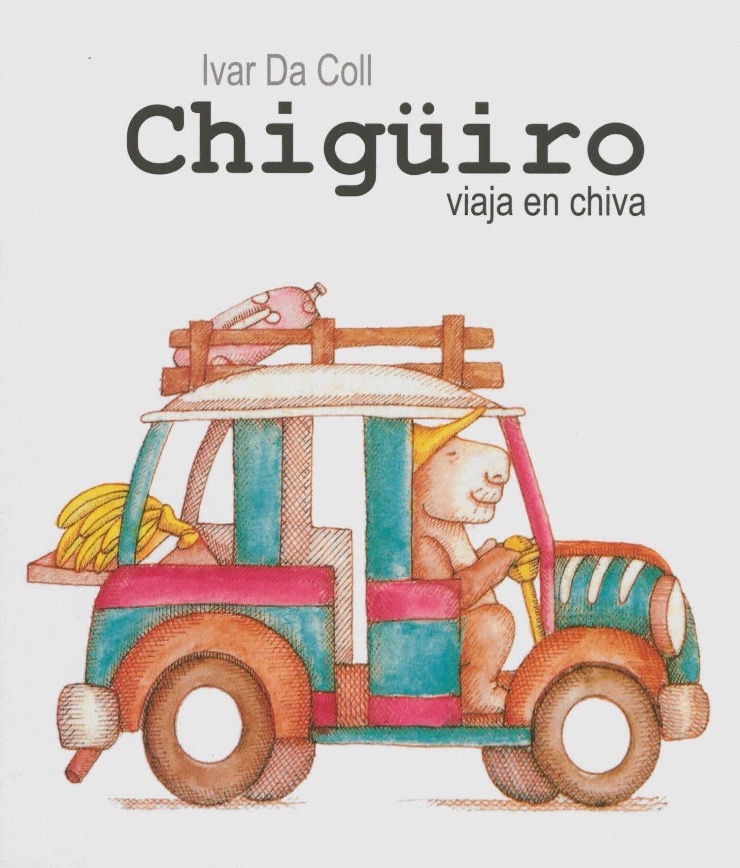 This HCAA nominee spotlight is courtesy of Angela Patricia Melo Arévalo and Marine Bernard, in partnership with Evelyn Arizpe and the Erasmus Mundus programme, the International Master’s in Children’s Literature, Media and Culture (IMCLMC).

Ivar Da Coll’s exploration of childhood and his ceaseless visual experimentation have made a long-lasting contribution to Colombian children’s literature and to the development of the picturebook genre in Colombia.

Ivar Da Coll (1962) is one of Colombia’s most well-known authors and illustrators of children’s literature. His relationship with the world of fiction began when he was 12 years old and joined a group of professional puppeteers, this early experience of designing scenography and puppets became crucial for his visual work. He began his career in the editorial world by illustrating school textbooks in the 1980s. By 1985, he published the series Chigüiro with the publishing house Editorial Norma which became a great success. His books have won multiple awards, such as best Colombian illustrated book (1990) by Asociación Colombiana para el Libro Infantil y Juvenil and the Premio Iberoamericano de Literatura Infantil y Juvenil SM award in 2014. He has illustrated books for well-known Colombian and South American authors such as Yolanda Reyes, Fanny Buitrago, Irene Vasco, and Ana María Machado, among others. Some of his books have been translated into English, Chinese, Swedish, and Danish.

His work as an illustrator in books such as El Día de Muertos (2003), inspired by Mexican culture, and ¡Azúcar! (2005), a biography of the salsa singer Celia Cruz, not only reflects his subtle visual humor but also his attention to detail. Similarly, in A Un Hombre De Gran Nariz (2007), an illustrated version of a well-known Spanish poem written by Francisco de Quevedo (1580- 1645), Ivar Da Coll uses black and white illustrations and graphite technique to recreate a parallel visual story while enhancing the poetic images and the satiric tone of in Quevedo’s poem .

Nonetheless, Ivar Da Coll’s most well-known work is probably Chigüiro, a series of Colombian books for early childhood presenting the adventures of a capybara, a giant rodent native to South America. The series was first published in 1985 and consisted of six silent picturebooks: Chigüiro chistoso, Chigüiro encuentra ayuda, Chigüiro viaja en chiva, Chigüiro y el baño, Chigüiro y el lápiz, and Chigüiro y el palo. The stories are told through simple sequences with anthropomorphized animals in natural environments placed against a white background. The series is printed on thick cardboard allowing the children to manipulate the books easily and encouraging readers to play with them.

Chigüiro is an innocent and childlike capybara who explores the world by doing daily activities like taking the bus, drawing, or playing with his friends: a monkey, a chicken, and a female capybara. Due to his physical features, Chigüiro resembles a stuffed animal making him a sweet and lovable character. According to Maggi (2007), this is achieved by the visual exaggeration of certain features like the size of his nose and whiskers, together with the simplification of other elements such as his eyes. The image of childhood underlying the stories revolves around Chigüiro’s innocence, imagination, and curiosity to explore the world. This is complemented by the character’s gestures, reactions, childlike postures, and movement which, along with its nakedness is a visual component of the reflection of the child’s inner world presented in the series (Maggi, 2007).

All the six stories in the collection are wordless. Its visual narrative lies on the sequential progression of the images that provide a sense of movement and rhythm resembling comic strips or short films accompanied by its theatrical nature and humor that captures its audience(Maggi, 2007). The characters are usually set against a white background which includes national or local elements in the setting such as a banana tree, Juncus (also known as common rush or soft rush, it is a plant found in wet areas of South America, such as wetlands) , or a chiva (refering to colorful rustic buses which still function as transportation in some rural areas of Colombia and who have a long historical and cultural tradition).

According to Ordóñez Trujillo (2018), Da Coll’s stories are characterized by aesthetic, semantic, and literary innovation and, in many of them, there is a conscious decision to foster ecological awareness. By making use of animal characters, there are often allusions to national endangered species and their habitats.

Most of the intratextual elements mentioned above constitute the literary value, innovation, and originality attributed to the series. Likewise, mediators and readers found in Chigüiro a sweet childlike character they could relate to, while being fascinated by its visual simplicity and the local and national referents present in the stories.

The publication of the series Chigüiro in 1985 marked a turning point for the development of illustrated books in Colombia and the later development of the picturebook genre (Castrillón, 2018). The success of the stories led to the expansion of Chigüiro’s literary universe with the publication of three more books. Unlike the first 6 books of the series, these additions included text and some changes in the aesthetic and visual representation of the little capybara.

These books revealed a maturation process of the series with more complex stories, characters facing difficulties, and dealing with human concerns. Similarly, many physical features of Chigüiro are slightly altered such as his eyes and body size, and the wearing of clothes. Probably one of the biggest transformations is the inclusion of text and the presence of older characters like Chigüiro’s mother and grandparents.

His relationship with the adult world becomes more intricate as Chigüiro experiences complex emotions and conflicts. For instance, In Chigüiro se va (1992), the character decides to run away from home after Ata (a mother figure) has scolded him for misbehaving. Then little capybara visits the home of other animals and this interaction allows him to reconsider his decision.

All in all, the trajectory of Ivar Da Coll’s visual work is unique. His expressiveness of the child world and his artistic experimentation are deep-rooted in Colombian children’s literature.