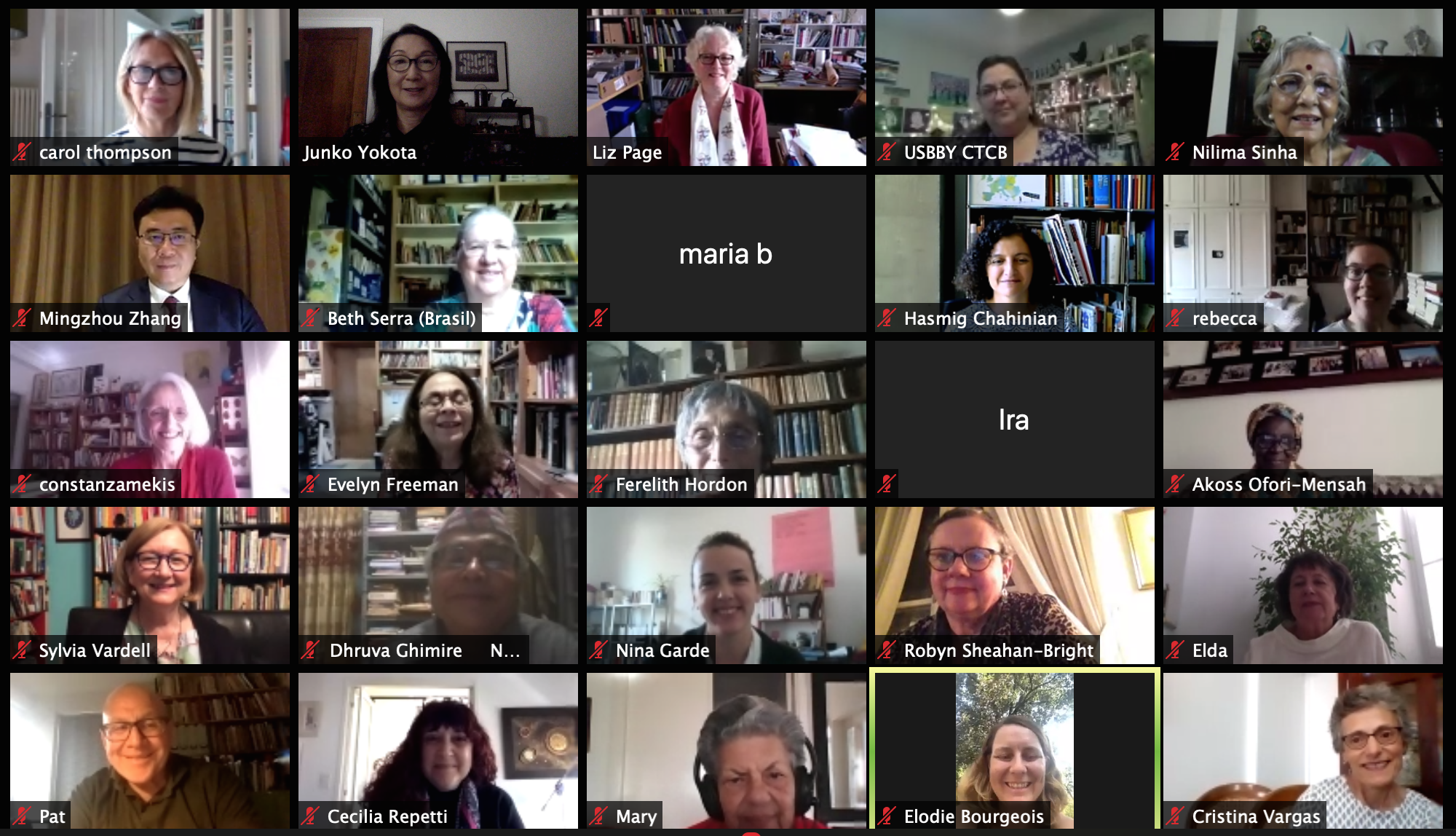 On 12 September, 2020, a number of members of the IBBY UK committee were able to attend the Assembly (the lack of travel has some benefits): Sophie Hallam, Carol Thompson, Rebecca Butler, Ferelith Hordon, Pam Dix.

And the event went seamlessly with 120 people zooming in from different time zones around the globe. It really helped us all feel part of the greater IBBY community.

Some highlights from the meeting

The opening speech was delivered by IBBY President Mingzhou Zhang, during which he reminded us that it is children who suffer most during the pandemic.

A forthcoming book about the history of Bookbird will be launched in Bologna 2021, entitled Bookbird: a flight through time.

The IBBY Biennial Report is now available, which documents the work of each national section. Printed copies will be distributed.

Fundraising through the Scarves Project, all designed by previous Hans Christian Andersen winners, is going well. Our own UK winner Quentin Blake has produced one of the designs.

A new member of staff will be starting at IBBY HQ on 1 November 2020: Nina Garda. She previously worked on the children’s programme at Frankfurt Book Fair, and is a speaker of French, German and English.

International Children’s Book Day 2021 will be sponsored by the USA, with a poster designed by Roger Mello.

The Asahi Award was won by CASA CUNA CUENTEROS, a project about reading with children in hospitals based in Buenos Aires (see here).

The IBBY I-READ Outstanding Reading Promoter Award was won by Marit Törnqvist from the Netherlands and Zhu Yongxin from China (see here).

The catalogue has now been printed and will soon be sent out. There have been 179 nominations in 48 languages from 60 national sections – 68 for writing, 57 for illustration, 54 for translation. Diplomas will be awarded at the 2021 Congress.

Nominations have been received in Toronto for the 2021 list – 31 national sections, 189 titles in 23 languages. More than ever before!

Leigh reminded us of a Japanese tactile book in the 2017 catalogue called Cough, Cough, Sneeze about the importance of wearing masks.

The First Moscow International Children’s Book Fair, in collaboration with Bologna, will be held during this time.

Children in Crisis programme (please contact us for more details)

To get a good sense of IBBY’s work around the world to help all children become readers, it is worth looking at the range of projects and countries receiving funds for 2020.

We had an update from Deb Soria, speaking to us from the IBBY library / cultural centre in Lampedusa, which was so exciting to see as IBBY national sections have supported this for so long.

A new project is being developed called Books on Board. A box of books are to be given to the each of the NGOs with ships involved in rescuing refugees and migrants from unsafe or small ships in the Mediterranean. A large red box will include books, pens and paper and carpet, and the crews will be trained in their use.

The next call out for Silent Books will be at the end of September.

Congratulations from all of us to IBBY UK committee member, Sophie Hallam on her selection.