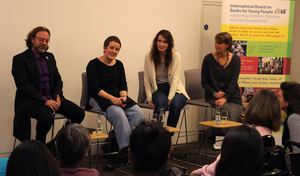 The Waterstones' room was pleasantly crowded as we gathered to celebrate the IBBY UK nominations for the IBBY Honour Book List 2016. This was not just a wine and nibbles event; rather we were able to meet the nominees and listen as they conversed with representatives from the IBBY UK committee. The audience might expect that they would be meeting an author and an illustrator - as indeed they did. However, IBBY aims to open the world of books and reading across all barriers, and translation is very important.

We were therefore thrilled to be able to meet our nominated translator, Chantal Wright  and the book Anton and Piranha by Milena Bausch. In her conversation with Sophie Hallam she shone some light onto the process of translation and how it worked in the world of publishing. While, in the case of Anton and Piranha - a winner of the German Children's Literature Prize - the publisher, Klaus Fugge, certainly played an important part, the norm is for the translator to have to "sell" the book to a publisher; no easy task. This is reflected in the number of translated books that appear on children's lists - too few. This was in Chantal's view, like saying that we should only eat apples, when oranges might be very thing we might enjoy. When it came to the actual translation, she felt "there was an unspoken expectation of objectivity" - but this could never be the case. Decisions about how to approach a text were often very subjective and had to be taken on a case by case basis.  Were the emergence of prizes for translation going to help? She was dubious. So much depended on what was then done around the prize - at the moment Anton and Piranha is out-of-print, a sad disappointment for the audience.

Laura Carlin, our illustrator for her work on The Promise, written by Nicola Davies, talked to Carol Thompson, herself an illustrator.  Laura had been drawn to the book because of the magic of the text " it's almost like poetry" - a life-affirming story about a girl, who despite herself, changes her world . When offered the text she had found it visually rich; so much so, there was a danger of repeating images. The challenge had been to make a real world alongside the text and imagine a  girl who then stepped off the page for Laura. This was her first picture book; her previous work had been to illustrate The Iron Man by Ted Hughes. It had been Walker Books that provided the opportunity for Laura to work with Nicola. She confessed it had not been the easiest of journeys. For the first time she had to think about her audience. "It was a massive learning curve"; a real lesson in collaboration, not just between illustrator and author, but also editor and designer. This had affected how the illustrations developed from grim and grimy to green. Carol commented on the texture of the illustrations. This had fed in from Laura's work with ceramics. When asked about artists she admired, she cited illustrators like John Burningham and Quentin Blake - artists who do not patronise their child audience; who retain their playfulness.  Laura has already won accolades - she was the Grand Prix winner of the Bratislava Biennale - and hearing her talk about her work we were in no doubt as to why.

Finally we heard from our nominated author, S.F. Said, already known to many for his novels about Varjak Paw. Here our nominated book is his novel Phoenix. Talking to Ann Lazim he led us through his career to the moment he realised that he had to write for children. Echoing Philip Pullman he feels that children's books are completely inclusive. It is layered - to the younger reader Varjak Paw is an exciting story about a cat, to an adult reader it is about difference, diversity and inclusion.  When asked if Varjak would return after two adventures.  Possibly - but he was very clear that he cannot write unless he has a story. After a period when as he said "he fell out of love with writing" he had an idea  - a boy on an epic quest to find his family - a quest that takes him across the galaxy. This was the genesis of Phoenix. It is a space epic. But you cannot exclude personal interests and concerns. Thinking about aliens (who do feature in the novel), what is an alien? Someone who is different. The story became not merely an exciting adventure, it is about difference, diversity, friendship across barriers, empathy and connection; a themes very relevant in the world today. He likes the idea of taking a "genre" form and done something a little different with it. One of the features that makes Phoenix stand out, are the illustrations by David McKeen. They had worked together on Varjak Paw but in the case of Phoenix it was a real collaboration, and Said even designed some of the sequences - moments that could not be described in words. Sadly Phoenix has not been translated out of English which is surprising. The arguments are familiar - only boys read science fiction and boys don't read! As Said pointed out neither statement is true. He was thrilled to be on the IBBY Honour List - "What an amazing organisation." It was a real accolade and exciting to see his book next to authors from across the world. Of course, one of the aims of the Honour List is to attract attention to books from around the world - we must hope that it will do this for this novel which reflects so much the message IBBY promotes.

It was an inspiring and enjoyable evening. A privilege meet our Honour Book nominees - and we must look forward to more such occasions.