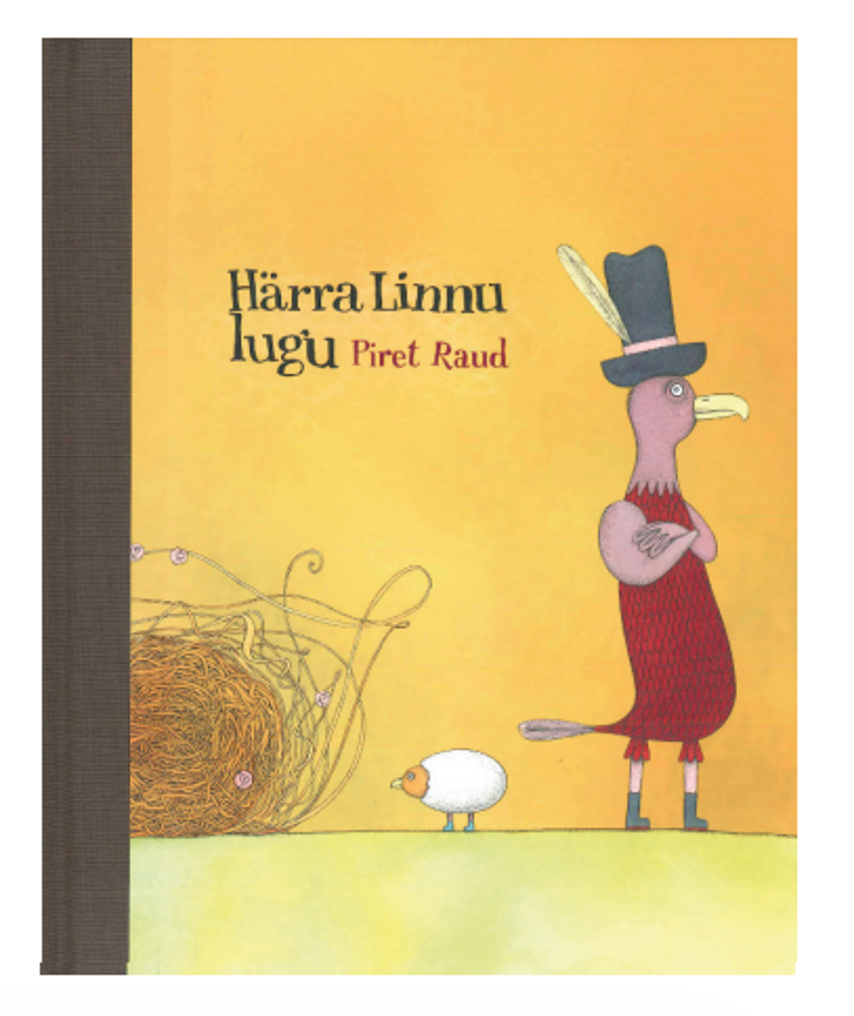 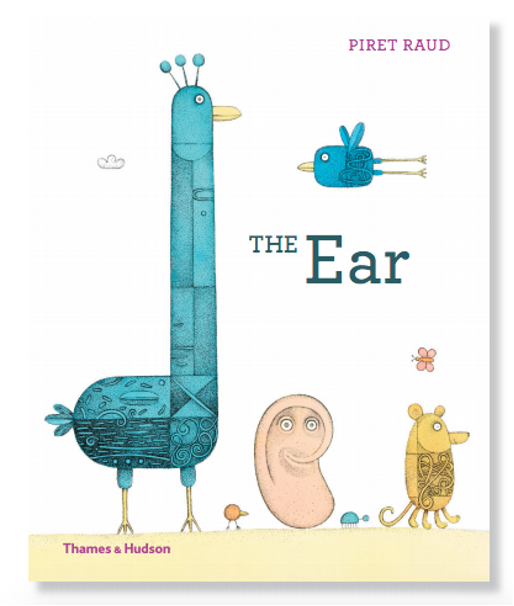 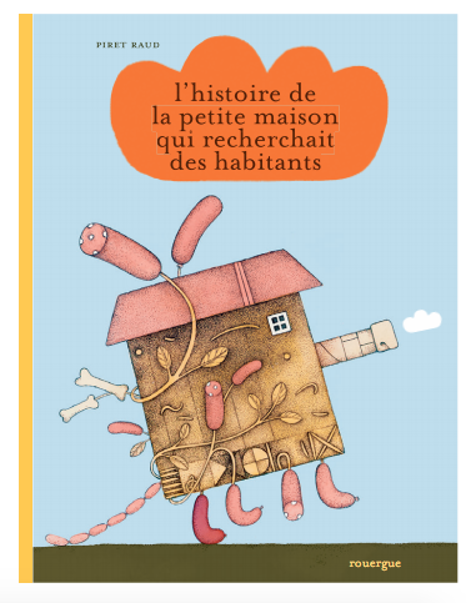 This HCAA nominee spotlight is courtesy of Diana Cruz, in partnership with Evelyn Arizpe and the Erasmus Mundus programme, the International Master’s in Children’s Literature, Media and Culture (IMCLMC).

Raud’s delicate lines and neat pointillism technique seem to confer a magic ability of transformation, an invitation to blur the bold lines of normativities in a series of storylines that celebrate and embrace authentic identities.

Piret Raud’s picturebooks The Ear (2019), The Story of the Little House Who Wanted to be a Home (2017), TRööömmmpff, or Eli’s Voice (2016) and Mr. Bird’s story (2009) are a delightful voyage across the waves of a shapeshifting sea: a realm of the poetic and dreams.

Piret Raud, nominated in the category of Best Illustrator for the Hans Christian Andersen Award 2022, was born in Tallinn, Estonia. Besides illustrating children’s picturebooks, Piret Raud is also a children’s book author like her parents Aino Pervik and Eno Raud (Estonian Section of IBBY, 2020).  Comparing herself as an author to her parents, Raud cleverly states: “[It is] our mothers who teach us the language. As it is said, ‘It’s mother’s tongue.’ So it’s quite natural that the language we speak, it is similar to our parents’ language.” (“Festivaletteratura”, 2018). And certainly, Piret Raud speaks the written and pictorial languages of art fluently when gently addressing her readers with poetic texts and images.

While interpreting the artist’s pictorial language in the picturebooks The Ear, The Story of the Little House Who Wanted to be a Home, TRööömmmpff, or Eli’s Voice and Mr. Bird’s story,  the characters’ dynamism of shapeshifting throughout the story is striking. Raud’s delicate lines and neat pointillism technique seem to confer a magic ability of transformation, an invitation to blur the bold lines of normativities in a series of storylines that celebrate and embrace authentic identities. In the picturebook The Ear (2019) the main character is Van Gogh’s missing ear. Feeling abandoned and confused, Ear starts the quest of finding a new place to belong. When experiencing the sequentiality of the picturebook, a playful dynamic of correlation between shapes takes place. Maybe Ear could be a rainy cloud in the sky, a curious fish in the sea, or the shell of a garden snail. At the same time, visual metaphors allow the reader to confirm that the art of illustration can be impregnated with the same powerful poetic sense of a written text. We can visually perceive the moods of the characters in the pictures. Before being heard by Ear, Frog’s body served as a canvas that illustrated a rainy cloud, a reflection of its sadness; after being heard, Frog’s canvas changed into a water lily pond, a reflection of its blooming joy.

Mr. Bird’s story (2009) is another example of the same shapeshifting concept. Tired of routine, “Mr. Bird” decides he wants to see the world and try to be different things until he finds his ideal and individualistic lifestyle. From the stillness of a soft pillow to the freezing silence of a snowman, he searches for a life far away from the bird community, where singing and building nests together is the norm. Regarding the element of the “nest”, its repetitive appearance throughout the previously listed picturebooks made me  realise how the artist has developed a whole series of symbolism. The nest is represented with a texture that perfectly simulates what a real-life nest looks like: an infinite maze of organic lines that tangle within each other. In TRööömmmpff, or Eli’s Voice (2016) the element of the nest reappears as a texture in the chest of Eli’s character, a voiceless bird, accompanied by a small egg right in the middle of her body, her fragile heart. In The Story of the Little House Who Wanted to be a Home (2017) we follow the touching journey of a house whose desperation to be somebody’s home makes it go through drastic transformations, including becoming a giant nest. In this beautiful scene, we see how the artist’s modality of representing a nest displays through the entire house. Only the squared window is left untouched by the texture, its frames now resembling an egg. Although this “maze of organic lines” might be thought of as only representing nests, this style is quite frequently used by the artist for representing fur or hair as well (in other words, all those natural elements that reflect the chaos of what seems infinite). Nevertheless, this “infinite texture” is just one of the many symbols she has developed in her pictorial language. Another significant aspect is the pattern that appears inside most of her characters: a grid containing different sections of high contrast shapes and textures. This grid allows the viewer’s eyes to perceive different levels of volume. A contraposition of organic lines and straight lines seems to take place when a character shaped by both of them appears. And they do appear frequently, making the experience of reading Raud’s picturebooks an act of visual delight.

The characters in Raud’s illustrations are canvases for displaying emotions and stimulating the reader’s eyes with visual dynamics of textures and volumes. The illustrations’ backgrounds are usually left blank or filled in a solid muted color. While achieving balance and minimalism in her compositions, the artist usually adds a few other elements to join the main characters in the scene. This allows an easy identification of hierarchies, a visual strategy that at the same time allows the viewer to perceive direction and, hence, movement. This is the case in The Story of the Little House Who Wanted to be a Home (2017). To emphasize the concept of a moving house, the artist uses a garden of roses (a pictorial element that transforms itself into wheels, feathers, sausage feet, or propellers) as a way for the house to find its direction and means of movement from one scene to another. In order to balance the composition, the artist carefully selects a moderate hue and saturation colour range.

Raud’s picturebooks transport us to a dream-like environment where everyone magically transforms into whoever they want to be – a subtle invitation for the reader to try the same. There are so many possibilities in analyzing Raud’s illustrations. I consider that the poeticism behind Piret Raud’s unique pictorial language makes her worthy of achieving the recognition of best illustrator for the Hans Christian Andersen Award; and hopefully in years to come, the recognition of best children’s author as well.