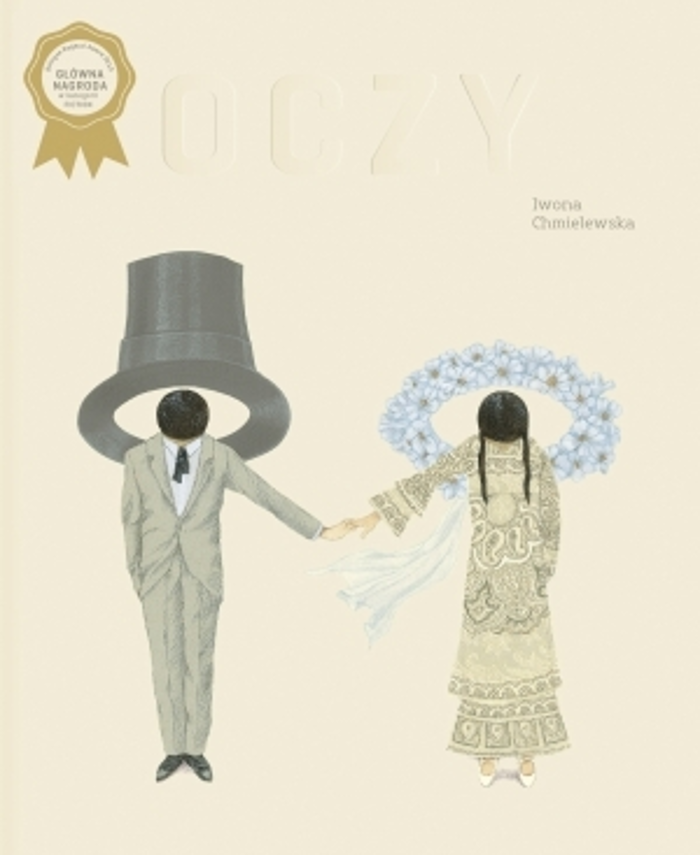 This HCAA nominee spotlight is courtesy of Luiza Dubicka and Hubbiah Rafaqat, in partnership with Evelyn Arizpe and the Erasmus Mundus programme, the International Master’s in Children’s Literature, Media and Culture (IMCLMC).

Whether it be union portraits or a blend of metaphors, Iwona Chmielewska’s combination of poetic images create a space for dialogue extending far beyond the boundaries of age, gender, or ability. Her works convey a humanistic message about the need of being open to the Other and they point to the artist’s perception of childhood as a state of ethical and political potentiality.

Iwona Chmielewska is an illustrator and a creator of original picturebooks published around the world. She was born in 1960 in the town of Pabianice in central Poland. She studied graphic design at Nicolaus Copernicus University in Torun. Her works have been exhibited at numerous individual and collective shows in Poland and abroad (South Korea, Japan, Spain, France and Germany). Chmielewska has been awarded the prestigious Bologna Ragazzi Award three times. In 2011, she received the Bologna Ragazzi Award for Maum: House of the Mind written by Heekyoung Kim. In 2014, the jury recognised Chmielewska’s book Eyes, while in 2020 she received the award for her book Lullaby for Grandmother.

Chmielewska’s work has gained recognition and critical acclaim in South Korea. She has cultivated a long-standing relationship with South Korean publishers, illustrated a number of books by South Korean authors, and published a total of 18 books in the South Korean market. Her success can be partly attributed to the fact that she writes “books about really important themes for children” (“Iwona Chmielewska — internationales literaturfestival berlin”, n.d.). Chmielewska believes that “art can be a valuable instrument…reinforcing not just sensitivity and creativity, but also the formation of values” (“Iwona Chmielewska — internationales literaturfestival berlin”, n.d.).

First published in South Korea in 2008 before appearing in Poland six years later, Two People is a non-fiction picturebook which explores the theme of human relationships. The main colours used by Chmielewska in her illustrations are shades of blue, green, and brown with occasional additions of red or yellow. The colour palette is warm – although rather dark – and the colours are saturated. Moreover, these colours are carried through into the textual layer of the work’s typography. Every double spread consists of one or more short sentences where some words are printed in blue while others are in brown. Sometimes this division happens between sentences, (i.e. one sentence is blue, another brown), and sometimes one single sentence is broken up by a change of colour in the typography.

Two People (2014)  presents an investigation of human relationships as an incessant series of encounters with ‘the other’ who is outside of, and therefore necessarily different from, the self.  In Two People, Chmielewska explores relationships between people and the nuances within those relationships. She takes on a range of unions: enriching and fulfilling ones as well as difficult – even destructive – ones. Chmielewska’s unique sense of observation accurately captures the union portraits of loneliness between even the strongest of bonds. The spreads in this book mirror the dichotomous insinuations of the title. The illustrations inscribe human features onto everyday items or places, e.g. islands are shaped like human bodies, trees are presented with limbs, a sandglass possesses human-like eyes and a mouth. Perhaps most emblematic of Chmielewska’s style is the way in which the puzzling metaphors of the text blend and are embedded into the illustrations. In one such spread, Chmielewska outlines with clocks how two individuals may experience identical time yet the pace may not be in sync: thus they must find a way to meet half-way.

The visual layer of this book introduces readers to significant figures and events from the Germanophone cultural context: from history, literature, philosophy, science, and art. The textual layer follows a typical ABC book format in that it presents objects/actions/concepts and the corresponding letter with which these words begin in German. The verbal text also provides a translation of every German word into three other languages: English, French, and Polish.

Chmielewska creates a multi-educational experience for the reader. For an ABC book, abc.de is highly complex in its various levels of cultural meaning, some of which will not be available to young readers or readers unaware of certain aspects of Germanophone culture.

The verbal depictions of language (or languages) as conventional signs and the visual depictions of culture and history as iconic signs work together in order to facilitate different levels of reading.

Although all of Chmielewska’s work is heavily based on the visual, nowhere is the act of seeing more central than in Eyes, a nonfiction picturebook first published in South Korea in 2012 and then in Poland in 2015. With very scarce text appearing only on every fourth page and always on the left-hand side, the book consists primarily of very light, pastel graphics. The main colours are pale shades of blue, green, red, and grey. The narrative centres around the theme of how the world is experienced by people who can see and by people who cannot see. In this picturebook, a ‘spread’ is made up of four single pages or two double spreads in the following way: three pages are dedicated to images and one page is dedicated to text. Every second page on the right-hand side has two almond shaped openings cut into the centre of the page, imitating human eyes. Every spread presents a different set of pupils and it is only after we turn the page that we realise that what we previously perceived as pupils are in fact parts of the greater whole of another illustration. In the first six spreads the text focuses on healthy eyesight. In the following twelve spreads both the images and the text focus on experiencing the world by people without healthy eyesight. These people constitute ‘the other’ in a society which often normalises some ways of being (for example, normative vision) while ignoring others (for example, blindness).

Eyes situates the reader in a dichotomous relationship by presenting the perspective of those who are vision impaired to those with no, or minimal, visual impairments, and therefore offers them the chance to experience the world in different ways.

It is interesting to study these works through the the ideology of ‘otherness’, especially but not exclusively in the Polish context, because while the Polish society is opening up to otherness, multiculturality, and heterogeneity, there is still strong evidence of a tribal mentality which limits people’s outlook upon and attitude towards others (for one example of a study in this matter, see Krekó et al., 2018). Reading and interpreting works which widen the perspective on ‘otherness’, such as Chmielewska’s picturebooks, is culturally important in social and humanitarian terms. In a society which polarises identities and categorizes people as groups rather than unique individuals, Chmielewska’s work offers narratives of interconnectedness.

Although Chmielewska lends only her illustrative artistry to this title, its reception of the Bologna Ragazzi Award in 2011 attests to her versatility as a creator. From the very beginning of Maum: The House of the Mind, readers are encouraged to ‘open’ the book ajar, as they would a door or a window. They are prompted to wave, sway, or even rock it like a newborn baby. In true Chmielewska style, there is a liberal yet masterful employment of humanesque imagery; streams of clouds stretch through one end of the page and extend into forelimbs towards the other. The illustrations are riddled with press-style cutouts and op-art spreads, culminating in a mirror (presenting to the reader an opportunity to confront their own soul).

In her own words, even Chmielewska admits to not knowing what her Maum is; to her, maum is the “soul – something invisible, but the most important thing in life” (Obuchow, 2011). This is one of Chmielewska’s works that can be appreciated by a manifold audience. The illustrative styles, “create undefined images which exist independently and are open to interpretation, so that anyone can find what they seek within them. (“Iwona Chmielewska — internationales literaturfestival berlin”, n.d.) Overall, The House of the Mind incites philosophical ruminations about the complexities of the soul with a playful hint of surrealism.

Chmielewska employs various techniques; pencils, crayons, watercolors, and scissors. The most recognisable Chmielewska style entails collages, lending the sense that her books have been made by hand. Oftentimes this handmade aesthetic elicits the use of colored or graph paper, cardboard, fabrics, newspaper clippings, books, sheet music, threads, and strings. With her ability to visually encapsulate complex topics, and her success translating foundational concepts rooted in Germanic origins so as to have them resonate with a potentially diverse audience e.g. East Asia, it is clear that the versatility of Chimielewska’s work has garnered positive reception not only in a Eurocentric context but also in a global context. The myriad of nominations and awards standing in Chmielewska’s arsenal suggest it is high time her achievements be formally affirmed by the IBBY board.