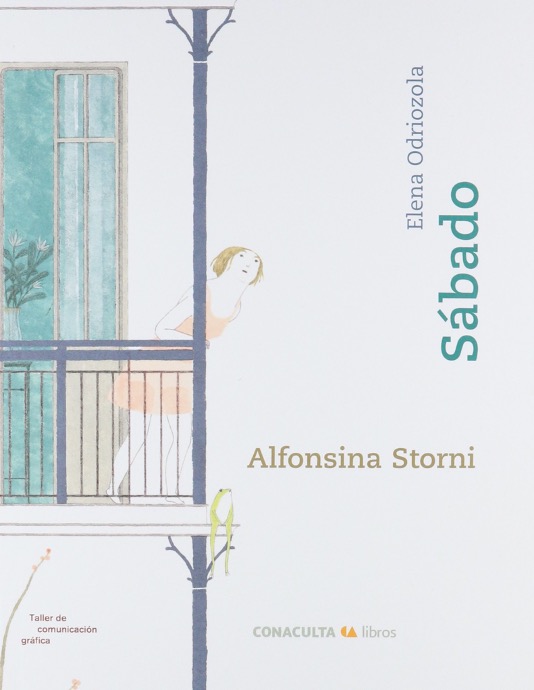 This HCAA nominee spotlight is courtesy of Camila Andonaegui and Loreto Espallargas, in partnership with Evelyn Arizpe and the Erasmus Mundus programme, the International Master’s in Children’s Literature, Media and Culture (IMCLMC).

Elena Odriozola is a crossover illustrator who blurs the boundaries between content for children and adults but also between continents, thanks to her easily recognizable style, with her iconic characters as well as its minimalistic, subtle, and naturalistic essence.

Elena Odriozola has always been pushing the boundaries of illustration. During her childhood in San Sebastián —a community in the Basque Country in Spain— her father enrolled her in drawing classes in the studio of the sculptor José Zugazti, where she stood out for her creations. After finishing her studies in art, she started to work in advertising. When the company employing her closed, she left this field to fully dedicate her life to children’s and young adult’s illustration. How could it not be, for she grew up surrounded by books, stories, and images that her aunt, father and grandfather provided.

Odriozola has illustrated more than fifty books including La princesa que bostezaba a todas horas (2005), which earned her the Second Prize for Best Illustration in Children’s and Young Adult Books from the Spanish Ministry of Culture. In addition, she won other awards dedicated to her easily recognizable style, for her iconic characters with thick necks and inexpressive faces, and its minimalistic, intimate, naturalistic, and subtle features. Among others, she received the Premio Euskadi in 2009 and 2013, and is acknowledged as a prominent author in the Basque literature that has contributed to women’s visibility in literature in the 21st century (Etxaniz, 2019).

Transforming classics such as Mary Shelley’s Frankenstein, Elena Odriozola can create theatrics with her drawings, or she can transform the story of Peter Pan with soft lines, displaying delicate flowers and nature with great mastery. However, the works that motivated us to choose Odriozola for this blogpost are the artworks where she transmutes the verses of four Latin American poets and writers into images. Odriozola translated into illustrated poetry the words of Alfonsina Storni, Pablo Neruda, Clarice Lispector, Rubén Darío and Julio Cortázar.

With these creations, among others in her collection such as ¿Cuánta tierra necesita un hombre? by Lev Tólstoi, the artist blurred the boundaries between children’s, young adults, and adult’s literature. Although the books were originally aimed towards an older audience, the editing and illustration have enhanced it toward a crossover perspective. In other words, in her works it can be difficult or almost impossible to determine if the books are aimed at children, adolescents or adults readers (Beckett, 2008). New studies reflect on the phenomenon and argue that crossover is not only a result of the mechanisms within the text itself, but also an editorial and marketing process called cross-editing (Tolentino, 2021).

From our perspective, Elena Odriozola is part of well-thought and deliberate cross editing projects, especially with Libros del Zorro Rojo and Nørdica Libros, the publishing houses featuring the Latin American books that we are analysing in this blog. Every book potentially exhibits to our readers a different aspect of Elena Odriozola’s signature, as well as her sensitivity to connect with poetry. In brief descriptions, we shall try to showcase the connections between two continents, and also the cross-oceanic bridge that only artistry can make possible.

In Sábado, it is easy to appreciate the pastel colours and Odriozola’s minimalistic style associated with a selected range of colours, where the green and grey predominates in different tones. These illustrations have a Japanese haiku influence that can also be seen in other books such as Un regalo del cielo by Gustavo Martín (Molist, 2020). With delicate but defined lines, Elena Odriozola portrays the spirit of Alfonsina Storni’s poetry, giving a nostalgic and mysterious dimension to her drawings.

One of the aspects of Odriozola’s style that is highlighted in this book is the portrayal of her notable human characters. Thick necks, lack of details, flat expressions, small eyes, and mouths, are her signature features. It is impressive how in this work she establishes through her illustrations a counterpoint relationship. The verbal text addresses a water drop and how it falls and slowly crushes with the rain, as it is usual in Cortázar tales, that narrate everyday situations under a poetic scope. However, the visual text exhibits a couple as a metaphor for their similarity to raindrops that perish and fade out over time.

In this book, both Clarice Lispector and Elena construct a complex dialogue between science and poetry, looking at the world from a subtle point of view. As Lispector creates a poetic encyclopaedia of flowers, Odriozola illustrates every part with an exquisite mixture of delicate traces. Contrasting the pastel blue on the background, with powerful strokes, Elena symbolises women as an army of sunflowers.

In this work, Elena Odriozola shows her ability to depict spaces. She is not afraid to utilise blocks of colour, differentiating the front from the bottom, and laying out big blank spaces (Molist, 2020). In Oda a una Estrella, Odriozola shows contrasting colours of a romantic night in a city, very distant to the style used in Sábado, which implies versatility and at the same time, a creative outline from her characters.

In this text, Odriozola plays with perspectives in an urban landscape, outside (contrary to in El aplastamiento de las gotas) with more straight figures as the modern buildings. We can see how she interprets the glass, the cement, and the night with more robust acrylics.

Elena Odriozola is a versatile Spanish artist that deserves to win the Hans Christian Andersen Award 2021, due to the poetic and sensitive spirit immersing in her trajectory. She has demonstrated an ability to cross continents and ages, to transform genres and languages, to push boundaries. Her work with Latin American poetry and Latin American women like Clarice Lispector and Alfonsina Storni is substantial for the international dissemination and recognition of our culture. Her illustrations resonate with the stoicism and inevitability of a drop that must not fade, fighting to survive against the winds and yet dancing.