Angèle Delaunois: Optimism and Hope for Children Young and Old 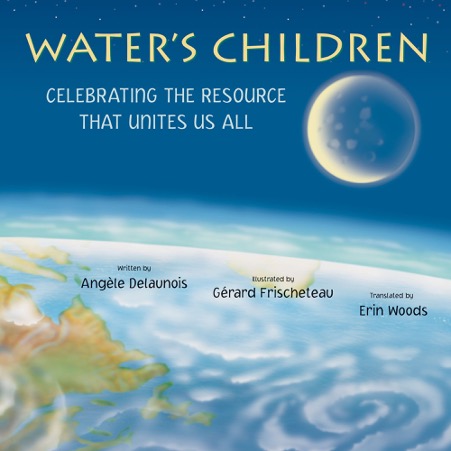 This HCAA nominee spotlight is courtesy of Emilie Owens and Sonali Kulkarni, in partnership with Evelyn Arizpe and the Erasmus Mundus programme, the International Master’s in Children’s Literature, Media and Culture (IMCLMC).

In a world of dark headlines and frightening concepts, Angèle Delaunois uses her books to speak honest truths about the world, sparking kindness and hope in readers of all ages.

In a world full of dark tidings and grim deadlines, creating literature for children is an increasingly challenging task: how to inform without traumatising, or sowing seeds of powerlessness and doubt? The prolific catalogue of Canadian author Angèle Delaunois is an answer to this question. Having written over one hundred books for children – many of which are non-fiction (des documentaries) – on such diverse subjects as vaccinations (Un vaccin pourquoi faire?, 2007), immigration (Venus d’ailleurs, 2009), skin care (Peau douce peau propre, 2008) and the social importance of water (Les enfants de l’eau, 2019), Delaunois manages to take a tactful approach to each subject she touches, presenting clear information with both empathy and warmth. Her dedication to caring for the world and its peoples is evident in every one of her books.

Born in Granville, France in 1946, Delaunois immigrated to Québec in 1968 and became a citizen of Canada in 1976. She was originally trained in plastic arts in the city of Trois-Rivières before moving to Montréal in 1982 to work for a consumer protection magazine called Protègez-vous (Protect yourself). She credits her time in the field of consumer protection with her initial interest in informative children’s literature: “everything that was published as children and young people’s literature found itself on my desk. Forced to read books for children, I said to myself it might be a good idea to write one myself” (Delaunois in Coté, 1999, 61).

Her talent for writing children’s literature has been well established: over the years Delaunois has won numerous awards and accolades for her books. Her natural science texts Les oiseaux de chez nous (1990) and Les mammifières de chez nous (1993) were recognised by the Consumers Association of Québec and the Science Professor’s Association of Québec, respectively. In 1998 her collection of nouvelles (short stories) entitled Variations sur un même «t’aime» (1997) was awarded the Governor General Award of Canada for French-language children’s literature, the most prestigious recognition in Canadian publishing. The book tells nine stories about love from the perspective of nine different young people, and in them the author works with a variety of challenging themes such as betrayal, friendship, hatred, and eroticism. Like all of her work, however, each of the stories in Variations is imbued with a fierce sense of both realism and optimism. Interviewed shortly after being awarded for Variations, Delaunois said the following:

I am an optimist. I find that life is beautiful, that we can find serenity, peace, and joy in the little things life has to offer. I think this comes through in my writing. I don’t believe that the world is as awful as we make out. Young people around me find this out well enough. There are so many possibilities offered to them…. Of course, life brings hardships. We need to get through illness, the death of loved ones. But that is a part of a larger wholeness. What I try to promote as primary values are hope and compassion. (Delaunois in Coté, 1999, 67)

Though she has published some fiction, Variations included, the majority of Delaunois’ publications are non-fiction concept books, where this desire to impart hope and compassion shine through best. Delaunois’ concise, informative style – always elegantly adapted to her readership (“In fact, there are multiple ways to write for young people.” (63)) – uses careful language to illustrate concepts and to contrast them, helping readers build their understanding of a subject holistically, in line with her aims as an author and beliefs as a person.

In her work Delaunois carefully balances joyous, playful imagery with significant truths about the nature of things in the world. Her sincere respect for children comes through in every page; in Un vaccin pourquoi faire? (2007) she uses a tone which invites the reader into the issue at hand, which is vaccination. “Personne n’aime les piqures, c’est normal,” [No one likes needles, it’s normal,] she writes, in a straightforward tone that reassures without condescending. The text moves from this more emotive experience of being pricked to the reasons for getting vaccinated: “Ton corps est encore plus fort que tu le penses. Il va garder en réserve les bataillons d’anticorps qu’il vient de fabriquer.” [Your body is even stronger than you think. It will keep the army of antigens that the vaccine has helped it create in reserve.] (Delaunois, 2007)

This straightforward but playful explanation of a very significant part of human life is the hallmark of Delaunois’ approach to her works: honest but not overwhelming – realistic yet optimistic. Particularly in this time of global pandemic, the importance of this work by Delaunois cannot be overstated. The patience, honesty, and humour with which Angèle Delaunois approaches her writing not only demystifies vaccines, but provides a jumping off point for conversations with children on all sorts of tricky or frightening subjects.

This is echoed in the text from another picturebook – Bonne nuit beaux rêves (2008) – which is illustrated by the same author as Un vaccin pourquoi faire? and takes the same stylistic tone, but this time on the subject of sleep. Rather than being a typical rhythmic bedtime story for young children (or, as is often the case, a narrative that is a thinly veiled imperative to go to sleep) this book patiently and thoughtfully explores the importance of sleep as a part of life. Where vaccination is a crucial element of life, sleep is an inevitable part of every day for everyone, and Delaunois outlines precisely why this is in a way that is both informative and engaging. By demystifying the idea of sleep, she encourages readers to consider this otherwise banal – or perhaps even frightening! – aspect of their day from a rational and curious standpoint.

Water’s Children, or Les enfants de l’eau (2019), takes a slightly different approach to the same aim. In this book, Delaunois writes in the voice of children from different places around the world, speaking to the importance of water in their lives. Yet again providing facts about life honestly, Delaunois writes from the perspective of children in order to better help her readers empathise with realities that may be outside of their personal understanding. For example, knowing that her Canadian audience knows only a water-dominated landscape of wide rivers, lakes the size of oceans, oceans which are even bigger, and may have at their doorstep crashing waterfalls and babbling brooks, Delaunois carefully but clearly outlines what it means for children elsewhere to be without water based on their own environment. Rather than lecturing or condescending, however, Delaunois presents a portrait of life in another country plainly through the eyes of a child. This approach demonstrates a respect for the child reader that is designed to inspire optimism rather than hopelessness in the face of such global inequality.

In these works, and in all her works, Delaunois invites children into ‘grown-up’ understandings of the world without condescending to them. She maintains respect for their fears and feelings while presenting them with the information they need to navigate the world happily and safely. Above all, these books offer hope to children of all ages: armed with the knowledge that the world is not a vast and terrifying place, readers of Delaunois may venture out into it with the optimism and confidence to make their own mark on it.

(all translations by Emilie Owens)