Spanning over half a century, the work of George Alfred Henty was amongst the most popular reading material chosen by young people, both boys and girls, in the second half of the nineteenth century.

Having spent much of his childhood as an invalid, Henty emerged in his early teens as a well-read boy, deeply interested in natural history and literature. He soon discovered that his interest, in poetry in particular, elicited mockery and potential bullying when he was sent to Westminster School (1847–1850/1). He remedied this situation by learning to box, a skill that proved useful throughout his varied life. He gained a place to study at Gonville and Gaius College, Cambridge, which he took up in 1852, but his health soon deteriorated due to overwork, necessitating a year out for recovery. Part of this year was spent at one of his father’s mines in Wales, where he learned about some aspects of mining engineering, knowledge that he used later in his novel Facing Death (1882), a tale set in the Welsh mining community.

Shortly after his return to Cambridge, the Crimean War broke out and Henty and his brother signed up to join the troops sent out to fight. It was during this period that Henty began to write letters home describing the appalling conditions under which the soldiers were living, letters that his family offered to a local newspaper, which printed them, thus adding to the media campaign led by William Russell, correspondent for The Times newspaper, to improve conditions and stem the tide of disease sweeping through the army. Henty’s younger brother Frederick died of cholera shortly after arriving in the Crimea. Henty himself was invalided back to England in 1855.

Henty’s published letters marked the beginning of what was to be his subsequent career as war correspondent for The Standard newspaper, a career he pursued from 1859 until 1865, by which time his health had failed. His experiences of world events, coupled with his interest in history, furnished the apparatus needed for the work he is known for, that of writing for young people based on historical events, and which he continued to do until his death in 1902.

Henty’s project to ‘write the past’ was as large as his stature and his personality. He conceived a plan to write a story based on every major event in English history. He did not succeed in such an ambitious plan, but he did produce some 80 novels spanning the centuries between 1250 BC and 1900, from the Ancient Egyptians (The Cat of Bubastes, 1889), through the Romans (The Young Carthaginians, 1887), Beric the Briton, 1893), through to the Boer War (With Buller in Natal, 1901) and touching most centuries in between. Henty’s stated intention was to teach history and to teach it enjoyably by inserting a youthful protagonist into any given historical situation and focusing the story on his (and occasionally her) exploits within the event. In the preface to Young Buglers (1880) Henty writes: “I remember that, as a boy, I regarded any attempt to mix instruction with amusement as being as objectionable a practice as the administration of powder in jam; but I think this feeling arose from the fact that in those days books contained a very small share of amusement and a very large share of instruction.”

Henty continues, ‘I have endeavoured to avoid this.’

The current reading and non-reading of Henty

Currently, Henty is rarely read by children’s literature specialists, mainly due to the length of his works and to his reputation as a thorough-going imperialist. The first objection cannot be disputed, although abridged, edited versions were published in the twentieth century until approximately the 1960s. The second is true in the sense that he was a man of his time, and his time was one of British imperial expansion. But reading his work yields some surprising discoveries, such as his defence of other cultures and especially of other faiths, his protagonists with mixed-race parentage, and his strong female characters. Where Henty has undergone something of a revival is in the reprinting programmes based on the home-schooling movement in the USA. These programmes set out their rationale clearly and are designed to fit in with the philosophy of those to whom they market their books. As often happens with historical authors, their work can be commandeered to a particular agenda due to some elements which fit in with that agenda. Other writers have suffered the same fate.

He soon discovered that his interest, in poetry in particular, elicited mockery and potential bullying when he was sent to Westminster School 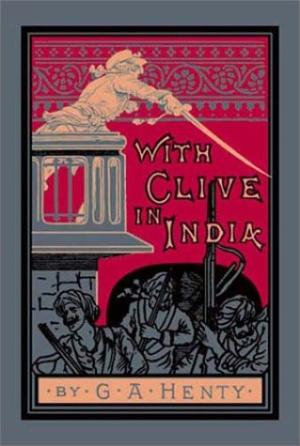 With Clive in India describes a political situation remarkably in line with a recent book on the history of India
Why study Henty?

In the current context of children’s literature research, the question may be asked ‘why study Henty’? One possible reason is his treatment of history. Henty’s stated intention was to provide a hero to be emulated, and to teach history. These two major purposes for writing are stated in the prefaces to his stories, in which he addresses his readers. Henty aimed to insert historical knowledge into stories that included historical figures and events. His method was to order up, from the library, half a dozen books that presented an account of the period in which he was interested. After thus researching the event from a number of angles, he dictated his story to an amanuensis. The speed with which his books were written, under a pressured contract from the publisher, often resulted in his narratives displaying passages of reportage in which he describes incidents that really happened. Given his career as a war correspondent, this slippage is not totally unexpected, especially when he writes about events in which he was present as a reporter.

Apart from his position as an influential writer of the past, another reason for studying his work lies in his construction of a youthful protagonist, usually male but not exclusively, which influenced not only his readers but also subsequent writers of literature for young people.

Colloquially referred to as ‘the Henty hero’, it is assumed that everyone will know to whom this designation refers. This youthful character provided aspirational character traits and hope for a productive and successful future, if emulated. Once again, the encouragement for the reader is in the prefaces. In the preface to Sturdy and Strong, (1888), Henty states: “[F]or success in life it is necessary not only to be earnest, steadfast, and true, but to have the faculty of turning every opportunity to the best advantage; … steadiness, perseverance, and determination to get on …. If similar qualities and similar determination are yours, you need not despair of similar success in life.”

The construct of the youthful protagonist found in Henty’s stories is the accumulated product of previous generations of the western construct of the child and youth. This figure reflects influences from the early constructs of the innocent child, whose various manifestations culminate in the redemptive child, through cultural exemplars such as the classical hero, with an emphasis on acting for the public good, to the fairy-tale hero whose character exhibits selflessness and compassion. The fairy-tale hero is not a construct usually associated with the work of G.A. Henty, although examples of this trope can be found in Captain Bayley’s Heir (1889) and By Sheer Pluck (1884), to name but two titles.

The construct of the youthful protagonist found in Henty’s stories is the accumulated product of previous generations of the western construct of the child and youth
Finally, it is possible to trace this character through subsequent children’s literature. For example, in Percy Westerman’s work, the 16-year-old boy through whom Westerman’s stories are in most instances focalised. This youth is more predictable and unchanging than is the Henty protagonist. (Also, Westerman’s generally stereotypical portrayal of foreigners demonstrates the hardening of attitudes towards the other in the years leading to the First World War, 1914–1918.)

The next obvious demonstration of the youthful protagonist is in W.E. Johns’ Biggles and Worrals of the WAAF, although to cite Biggles and Worrals immediately after Westerman is to reinforce a possible perceived divide between genres that arguably does not exist, at least, not in any clear-cut form. If we consider, for example, award-winning material such as Arthur Ransome’s Swallows and Amazons (1930) or C.S. Lewis’ Narnia stories (1950–1956), neither of which would immediately be categorised as ‘adventure’, then demonstrable parallels may be drawn in the area of the unfolding manifestation of the youthful protagonist. From the independent children found in Arthur Ransome’s books, through to Harry Potter and Alex Rider, the character traits of courage, honesty, integrity, and defence of the bullied or the underdog are key to the success of the protagonist’s (or protagonists’) undertaking, however that undertaking might be presented. Differences in the construct of these characters in contemporary children’s and young adult literature include some reluctance to undertake the task presented, but the same traits are foregrounded in their success.

As a writer of the past for young people, Henty’s grasp of facts and political situations was wide ranging. His story With Clive in India (1884) describes a political situation remarkably in line with a recent book on the history of India and in the same detail.10 His perception of potential future global implications of a pre-1902 scenario in, for example, his discussion of the state of Europe in A Soldier’s Daughter (1906), reveal insights and fears about the possibly of a great conflagration that proved to be prophetic. His ability to impart historical knowledge, leaving aside the discussion concerning the fictionality of history, which time and space here do not permit, earn Henty a place amongst work worthy of further study, whilst further enquiry into the influence of Henty’s construction of an identifiable youthful character in contemporary works would be valuable to current and future research. Finally, I resisted putting a question mark at the end of the title since that small addition would need a different discussion, but another point to consider is ‘was Henty writing the past or was he always writing his present? This is a question that might be asked of all writers of the past.

Rachel Johnson was the Research Librarian at the University of Worcester, UK until December 2012. The Research Collections at Worcester include a significant collection of nineteenth-century children’s literature and contemporary multicultural children’s literature. See researchcollections@worc.ac.uk. She is currently Associate Staff with the International Forum for Research into Children’s Literature based at the University of Worcester. Her research is predominantly in the field of nineteenth-century children’s literature with a specialism in George MacDonald and G.A. Henty. Having recently moved to Cambridgeshire, she is now working part-time as a librarian (job share) at Tyndale House Library, a small research library in Cambridge, UK that specialises in biblical studies (http://www.tyndale.cam.ac.uk/) and in her ‘spare’ time, volunteering at Homerton College Library, Cambridge, UK where she is working with a special collection of historical children’s literature. Contact: wanderinglibrarian56@gmail.com.
Works cited