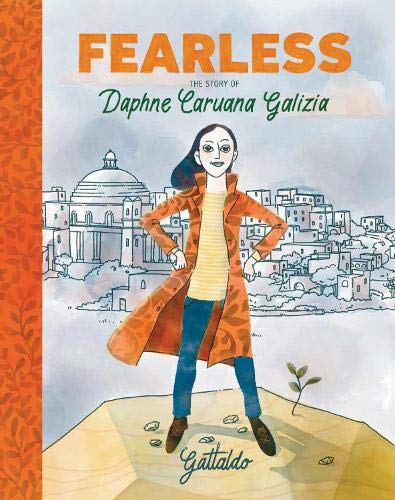 Fearless is the story of Daphne Caruana Galizia, the investigative reporter, who devoted her life to standing up for truth, justice and freedom of speech.

Not many young people in the UK will have heard of Daphne Caruana Galizia. This makes this picture book biography all the more important and relevant. Daphne who was Maltese had what might be considered quite an ordinary childhood enjoying stories of her great grandfather who stood up to Napoleon’s occupation of the island, reading voraciously, fostering an ambition to become a writer using words and pictures to tell the sort of stories she enjoyed in magazines and newspapers. She achieved her ambition to become a journalist, becoming one of the very few women journalists in a national newspaper. Her hatred of injustice saw her taking up her pen to oppose it wherever she found it. Her outspoken stance led to enemies. She was killed in 2017 when a bomb placed under her car, exploded.

Gattaldo presents Daphne’s story with minimal text in straightforward language making it instantly accessible to young readers. Accompanying his words are the illustrations, no mere adjuncts but integral to the presentation, extending and underpinning the story he tells. Daphne is seen in bright colour against a monochrome grey background, those who oppose her are Scylla like monsters, her isolation shows her alone surrounded by bleak ocean waves.

Picture story biographies are becoming more usual, the subjects most often well-known icons. This is a welcome addition to the genre reminding us there are many inspirational figures around the world who may not be familiar figures – but who should be.