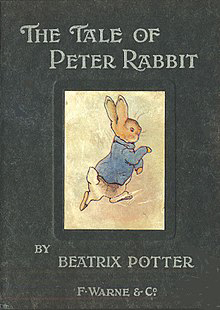 Tucked away upstairs in the Victoria & Albert Museum’s Leighton Corridor, this well-mounted exhibition, that offers much to delight and surprise, concentrates on those aspects of the creative work of Beatrix Potter (1866–1943) that are rarely seen.

Peter Rabbit is, of course, her most famous creation but perhaps less well-known are her visual interpretations of well-known fairy tales, her creation of new ones and how she was inspired by nature and the work of other illustrators.

As an introduction, the V&A’s notes tell us how when Beatrix Potter recalled her favourite places, ‘she seamlessly merged memory and imagination’. Of an old Scottish holiday haunt Potter remarked that although the elfin castle was no longer hidden in the shadows of Craig Donald Wood she preferred to remember it when ‘the great harvest moon rose over the hills’ while the fairies danced on the grass. Tree sprites and fairy circuses as well as nature itself, from hedgehogs to fungi, existed in her fairyland world, and in her journal that she began writing when she was 15, she remembered ‘half believing and playing with fairies as a child’, while the fairy tales of the German brothers Jacob (1785–1863) and Wilhelm (1786–1859) Grimm fired her imagination.

A great English fairy tale, though not written for children, is A Midsummer Night’s Dream (1600) by dramatist William Shakespeare (1564–1616). Inspired by the lyricism of his words Potter took the line ‘the cowslips tall her pensioners be’ (1868: 215) and, rather than creating a Cicely Mary Barker-like flower fairies illustration, here displayed is an exquisite study in watercolour and pencil on card of cowslips and bluebells (c. 1880s), the cowslips representing the fairy queen Titania’s courtiers.

But Potter found inspiration mostly in European fairy stories. For Little Briar Rose (Dornröschen), from Grimm’s Children’s and Household Tales (1823), she used sepia wash, pen and ink and watercolour on card (c. 1899) to create a floral border within which is an extract of the text in her tiny handwriting, Potter also used this border design to illustrate the fairy tale’s alternative English title Sleeping Beauty, the exhibition notes pointing out that the sepia ink gives the image an appropriately ‘sleepy quality’.

Two illustrations of Kittens Collecting Game in watercolour and pen and ink on paper were created for a fairy tale by the French writer Madame D’Aulnoy (c. 1650/1651–1705) called The White Cat (1892). Potter ignored, however, the main plot of the story that required a prince to cut off the head of a cat who was in reality a bewitched princess and concentrated on depicting cats doing what cats usually do: hunting for mice. Potter’s cover (1894) in pen and ink and pencil on paper for a version of Puss in Boots, a fairy story popularised by French writer Charles Perrault (1628–1703), shows the artist’s flair for design. The puss himself is arranged within an oval, while the story’s elements are skilfully arranged amongst the rosebush tendrils in the border. [Cover can be viewed at
http://collections.vam.ac.uk/item/O1267746/puss-in-boots-drawing-potter-beatrix/.] The exhibition notes draw parallels here with border designs used by German fairy-tale artists, particularly Otto Speckter (1807–1871) whose title page (1844), adjacent to Potter’s for the same story shows, as Potter’s does, a pair of boots dangling from a branch that suggests that she was familiar with, and perhaps inspired by, his work.

In the 1890s Potter also penned a version of Cinderella (a folktale originally written down as Cendrillon by Perrault in 1697) a page of which, in her own script, and an early attempt at writing, is on display. There is a delightful accompanying illustration, small and detailed in grey wash and pen, of Cinderella’s pumpkin coach drawn by six rabbits. [This sketch can be viewed at http://collections.vam.ac.uk/item/O1371107/cinderellas-coach-drawn-by-three-drawing-potter-beatrix/.] Potter’s later plan to illustrate for publication a set of fairy stories sadly never came to fruition so it is fortunate that these sketches and manuscripts survive. 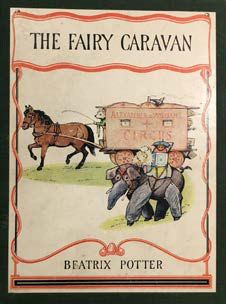 There are several illustrations, however, on display of Potter’s own fairy tale The Fairy Caravan (first published in the USA in 1929 but not issued publicly in Britain until 1952) set in her beloved Lake District that follows a fairy circus through the countryside. It is interesting to see the artist’s working method, and in pencil, pen and ink and china white corrections on paper, one illustration shows Mettle the Smithy Dog (a savvy terrier) in his leather apron.

In 1872, when she was six, Potter was given a copy of Alice’s Adventures in Wonderland (1865) – ‘or it could have been its sequel’ (1871) – referred to ‘by Carroll and his contemporaries as a fairy tale’, and she was captivated, particularly by John Tenniel’s illustrations. Interestingly, as the exhibition notes observe, in Potter’s Alice picture (1893) in watercolour and pen and ink over pencil on paper on display, the back view of the White Rabbit behind Bill, the unfortunate Lizard, ‘looks familiar in his blue coat’. Indeed, he seems to be anticipating what would become Potter’s most famous creation, Peter Rabbit. He would be joined by siblings Flopsy, Mopsy and Cottontail in The Tale of Peter Rabbit, in pen-and-ink and self-published in 1901 and published in colour to great success by Frederick Warne in 1902. 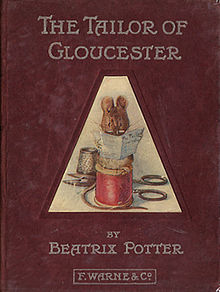 More titles followed. Inspired by a story she was told, Potter excitedly exclaimed ‘I heard it in Gloucestershire and it is true!’
A tailor in Gloucester had left a waistcoat ready to sew and when he returned it was finished, thus Potter’s story The Tailor of Gloucester, self-published in 1902 and published by Warne in 1903, was born, although in her version it is mice not fairies that are the mysterious visitors. In the displayed illustration (1902), not used, of the mice, the watercolours, with pen and ink on paper, seem as fresh, and they really glow in the gallery’s subdued lighting, as when they were first painted.

While Potter’s illustrations for the fairy tales, Shakespeare and Alice shown in this fascinating exhibition were created for her own pleasure and for developing her technique, with the publication of The Tale of Peter Rabbit and the titles that followed that technique was perfected and her lasting fame assured.

Carroll, Lewis (illus. John Tenniel) (1871) Through the Looking Glass and What Alice Found There. London: Macmillan.