back to IBBYLink Autumn 2017
Jaanika Palm

1. The publishing scene for young people in Latvia.

In recent years 10–12 publishing houses have published some children’s literature every year.

Around 17–20% of the published books are aimed at children. These include fiction and informative literature.

We have very few stories and novels depicting real life. This deficiency is compensated by many good translations.
In recent years the number of picture books has grown significantly, both original Latvian and translated picture books.

About 50% of new original Latvian children’s literature are fairy tales, fantasy and science fiction for young, middle-grade and young-adult readers. We have very few stories and novels depicting real life. This deficiency is compensated by many good translations.

Poetry for children is one of the basic types of Latvian children’s literature, both in the past and nowadays. In all times, writers for children have found poetic means appropriate for revealing the beauty, variety and complexity of the world.

2.  Insight in the history of Latvian children’s literature.

Latvia is one of the three Baltic countries and shares its historic fate with Estonia and Lithuania. During the inter-war period in the 1920s and 1930s all three Baltic nations had established independent states that both intellectually and physically belonged to Europe. The cultural and educational level of the Baltic States corresponded fully to European standards – in 1935 the number of literate people in the towns of Latvia had reached 94.06%, in the countryside, 85.02% and on average in Latvia the number of literate people was 88.85%. (Salnītis and Skujenieks, 1938, p.98). Book printing was a flourishing industry.

The movement of establishing libraries in the territory of Latvia started as part of the national awakening in the middle of the nineteenth century. In the 1920s and 1930s libraries functioned in all kinds of educational institutions: folk schools, vocational schools, secondary schools and universities.

The Soviet occupation and the Second World War put an end to the prosperity of the Baltic States. After the agreement signed between Nazi Germany and the Soviet Union about the zones of influence, Soviet troops entered the Baltic countries in June of 1940, and all three countries, under the pressure of the military power, joined the Soviet Union. The official Soviet claim was that the Baltic peoples ‘voluntarily’ consented to their incorporation into the USSR, and this became the legal basis for nearly five decades of Soviet rule (O’Connor, 2003, p.116).

After the restoration of independence in 1991, the publishing sector was the first to be privatised.
The level of life in the Baltic countries during the years of Soviet rule decreased considerably. The economic system was strictly controlled by the state and turned out to be ineffectual. Shops lacked goods that were needed both for people’s physical and intellectual existence. Books, too, were difficult to purchase. There functioned only state-run printing houses and their number was small. In 1980s five publishing houses functioned in Latvia.

Although the Soviet power implemented the policy of Russification, the Baltic nations made every effort to protect their national identity, language and culture. Culture became a collective form of resistance of the three small nations against the endeavours to dissolve their identity into the Soviet nation and culture dominated by the Russian people. The intelligentsia, including writers, took an important place in the public protests and frequently became figures of cult in the Baltic countries (Kestere and Stikāne, 2015, pp.47–50).

After the restoration of independence in 1991, the publishing sector was the first to be privatised. New publishing houses were founded, and the number of new titles has increased annually.

Since 2001 when the Children’s and Young Adult Jury was created and implemented by the Children’s Literature Centre of the National Library of Latvia, the improvement in children’s literacy and the development of children’s literature in Latvia has been substantial. In the last five years this initiative has attracted 17,000–20,000 participants every year in Latvia and in Latvian community centres in other countries. The best and most exciting books are distributed to up to 700 libraries and Latvian centres abroad. The programme works according to simple, easy-to-understand principles – step by step involving its participants into reading, discussing and evaluating different books that develop their critical thinking, together with reading and writing skills. Every year professional experts choose the best books by Latvian authors and translations, and include these books in the collections of the programme for four age groups: 5+, 9+, 11+ and 15+. The participants have to read 6–7 books intended for their particular age group and give their evaluation, putting them in first, second and third place (Cielēna, 2015, pp.4, 40). 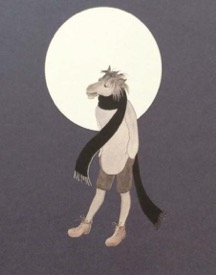 A horse that sings at night, illustration by Laima Eglīte.
4. Some special persons and characters in Latvian children’s literature.

Both during the Soviet period and the 26 years of independence, poetry has been the genre of Latvian children’s literature, with the many published books and the richest content. Poetry also produced the most courageous and innovative books.

The giant of Latvian poetry Ojārs Vācietis (1933–1983) excelled in this particular genre, rising high above the limitations and restrictions of the Soviet time in which he lived, and inventing striking and inimitable modes of expression. From his poetry numerous unique characters have emerged, one of the most striking is the mysterious horse that sings at night, the symbol of freedom of a creative soul.

One of the poets who continued the traditions of folklore and classical poetry in revealing the closeness and ties between man and nature was Jānis Baltvilks (1944– 2003). His contribution is some 30 children’s books of poems, prose and non-fiction. The author’s live contact with readers and his collaboration with schools and libraries consolidated his image among readers. His family name ‘Baltais vilks’ – ‘White Wolf’ – has become a sort of totem in Latvian children’s literature. To preserve the outstanding poet’s memory and to promote children’s literature, the Baltic Sea Region Jānis Baltvilks International Prize in Children’s Literature and Book Art has been established (in 2005). Winners are now announced on 24 July, the birthday of the poet, and prizes are awarded to a writer, an illustrator, and a foreign writer and their translator of the work into Latvian.

Ilze Stikāne studied philology at the University of Latvia and holds a PhD in Latvian literature. She is a professor at the Faculty of Education, Psychology and Art of the University of Latvia. Her academic interests include history and the actual process of children‘s and youth literature, and the history of Latvian literature. She is the author of one monograph, numerous articles and ten textbooks in literature for grades 4–9. Since 2003 she has been president of the Latvian Section of IBBY, and since 2008 the member of the Latvian Section of the International Literacy Association (ILA).