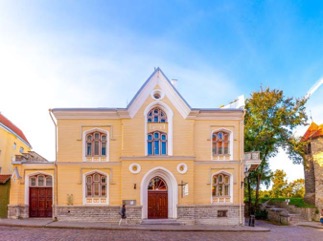 back to IBBYLink Autumn 2017
Jaanika Palm

1. Could you tell us a bit about the publishing scene in Estonia, especially for young people.

What is the size of the market? How many children’s publishers and how many books are published each year? Do you publish many books in translation (what percentage), i.e. from the UK/USA or other countries? Is there a popular genre and what ages  do publishers target – early years, young readers, middle grade, young adult?

In 2016, 778 children’s books were published in Estonia, nearly half of which consisted of works of popular science for children and activity books. Nearly 30% of the fiction intended for children is made up of original works, and a little more than 70% are translations. About half of translated works are translations from English, with American and British literature being translated in almost equal amounts. From American literature, many teenage books by John Green, Kathleen Glasgow and Neal Shusterman are translated, in addition to commercial fiction. From British literature, more children’s books by David Walliams, Francis Hardinge and Wendy Meddour are translated into Estonian than by other British authors. The second largest group consists of translations from the Scandinavian countries – in particular, we see many books by Swedish authors (Martin Widmark, Åsa Larsson, Ingela Korsell and Katarina Mazetti) and Finnish authors (Mauri Kunnas, Timo Parvela, Tiina and Sinikka Nopola) published. Of the other European languages, the most well represented are German, French and Dutch. Children’s books from our southern (Latvian and Lithuanian) and eastern neighbours (Russia) are relatively little translated. The majority of the works published – 67% last year – are aimed at young children. Some 26% of the children’s books published were intended for ages 8–12. Only 7% of the total number of works published were intended for teenagers (13+).

2. Historical influences. So little is known here about the Baltic States that to learn about the links with Scandinavia, Sweden and Germany that have created a distinctive Estonian voice, and, of course, the Soviet influence, which form part of your heritage, would be very interesting and enlightening.

3. Reading promotion activities. How do you reach your markets, reading challenges/ initiatives, booklists, bookfairs, school provision, public libraries? I understand you have a wonderful cultural institution–  we should love to hear about it.

In Estonia, the publicly funded Estonian Children’s Literature Centre (ECLC) sits at the core of children’s literature and children’s reading. The Centre collects, preserves and mediates children’s and youth literature for all enthusiasts as part of Estonia’s cultural heritage meant for use towards research, education and entertainment. On the ECLC’s initiative, all Estonian babies receive their first very own book, which contains classic Estonian children’s literature and the best examples of our authors’ recent works.

At the Centre children are welcome to visit the library with its rich collection and take part in various activities relating to children’s literature. Seminars and courses are held for adults – for parents, teachers at nursery schools and schools, librarians and university students. Here, one can find information about Estonian children’s literature as well as about children’s literature from around the world. The creators of children’s literature – authors, artists and publishers – are indeed frequent visitors to the ECLC. The ECLC also recommends and promotes their works abroad, participating in international book fairs (Bologna, Frankfurt, London, etc.), among other activities. The ECLC compiles a list of recommended newly published children’s books, which is actively used by teachers as well as librarians. Recommended books are marked with stickers at two of Estonia’s larger bookshop chains. In order to bring forward the best literature, a monthly book review (Kuuraamat) and the web publication The Children’s Literature Observer (Lastekirjanduse Uudistaja) are published on the ECLC’s webpages once a month.

Public libraries and schools across the country as well as voluntary organisations (the Estonian Section of IBBY and the Estonian Reading Association) work in close cooperation with the ECLC. Both international important events (International Children’s Book Day) as well as local notable days are jointly celebrated. One of the most important of these is the Mother Tongue Day on 14 March, when children’s authors, illustrators and literary researchers are welcome guests at children’s educational institutions and libraries. On the Read Aloud Day on 20 October, children as well as adults are encouraged to read books aloud to each other.

4.  What do you feel is special about Estonia? What makes you particularly proud?

Now, when Estonia has been independent for a quarter of a century in succession, our children’s literature is outstanding. Estonian children’s literature is characterised by an abundancy of imagination, colourful characters and the philosophical content of the text. Fantasy books are often also closely connected to the problems hidden in contemporary life: e.g. children’s loneliness, the search for one’s identity, and relationships to parents and friends. As far as appearance is concerned, Estonian children’s books are also of a high standard; they are illustrated by professional and distinctive book artists (Catherine Zarip, Ulla Saar, Regina Lukk-Toompere, etc.).

Estonian children’s literature is characterised by an abundancy of imagination, colourful characters and the philosophical content of the text.
Estonian children’s literature is like a well-kept secret, which has begun to be discovered and translated into other languages only in recent years. The countries to which one work has reached swiftly have other works translated as well. In 2015, 17 Estonian children’s books by seven authors (Mika Keränen, Aino Pervik, Eno Raud, Kertu Sillaste, Kätlin Vainola, Andrus Kivirähk and Piret Raud) were published outside the homeland. German, French, Polish and Latvian were among the most common target languages.

The most translated author of children’s literature as well as Estonian literature as a whole is Piret Raud (b. 1971), who illustrates her own works. Raud’s work has won many Estonian awards and sits enthroned at the top of charts over most-sold and borrowed books. Her work is characterised by unique features that combine reality and fantasy in a captivating manner. Outside Estonia, most of her books have been published by the French publishing house Rouergue (six books).

Children’s books by Andrus Kivirähk (b. 1970), one of Estonia’s most beloved novelists, playwright, radio host and columnist, are also much translated. Kivirähk is a multi- talented individual who is gifted and successful in many areas – children’s literature is but one of them. Kivirähk’s children’s literature is characterised by abundant fantasy and a unique sense of humour, which form a fascinating whole, together with a fast- moving plot. Kivirähk has continuously been praised by critics and children alike.