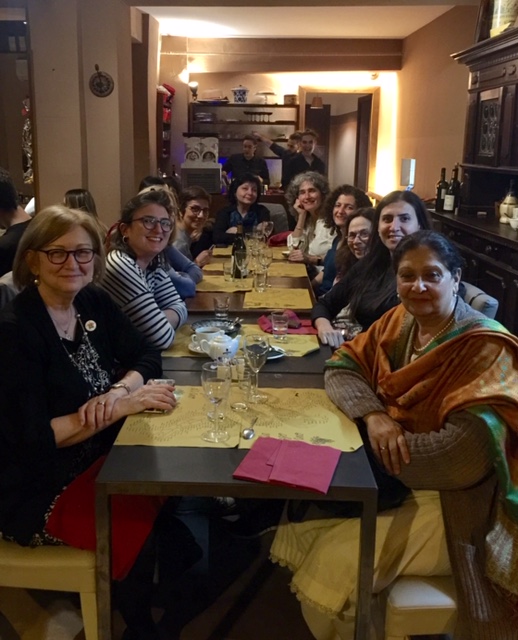 A report by Sophie Hallam, member of the IBBY International Executive Committee and IBBY UK.

Travelling to Bologna Children’s Book Fair on 29 March was a stark and poignant reminder of the importance of the work of IBBY International. A date branded on our collective consciousness for leaving the EU, I was fully aware of the irony of my departure. Set up in 1952 by visionary Jella Lepman, an author, translator and journalist, IBBY’s purpose was to foster greater international understanding in war-torn Europe. Our connection with our European colleagues, and with those across the world, feels particularly relevant at the present time.

Recently elected as a member of IBBY’s Executive Committee at the Athens 2018 Congress in Greece, this trip to Bologna is one of my first biannual meetings to discuss IBBY’s role across our 78 national sections. It is an opportunity to meet with other members of the committee to discuss IBBY’s ongoing projects and how we can continue to work together, keeping our minds and cultural borders open.

There are 10 members of the Executive Committee each of whom are elected every two years at the IBBY World Congress and who may serve a maximum of two terms. The role of the EC is to develop the work of IBBY through sub-committees, discussion at our biannual meetings, and to liaise between regions. You can read more about the Executive Committee members here: www.ibby.org/about/organization.

One of the joys of being on the EC is to hear some of the great work across our national sections which are reported at our meetings. Some of the projects presented included IBBY Costa Rica’s ‘Los Libros Violetas’, a project to support gender equality with guided readings/worksheets and book list. IBBY Mexico trained a group of women to help children impacted by the devastating earthquake in 2017 by providing 200 books in an open library scheme. In Pakistan, there are over 640 IBBY mobile libraries: Knowledge on Wheels. IBBY Canada has developed its Readers and Refugees Programme which includes training sessions for volunteers, reaching more than 100 children every week. They also created a digital catalogue of the best Indigenous picture books over the last 25 years with a huge Twitter campaign asking local libraries/bookshops to buy more of these books. IBBY Palestine supports libraries in Gaza and IBBY’s REFORMA project works with migrant children detained in the south western USA. These are just a few examples of the great work that is happening within IBBY’s sections. This global network of knowledge means that projects can be shared and replicated with support of the sections involved.

Many of IBBY’s projects are supported by Yamada and the Children in Crisis fund. The IBBY-Yamada programme funds up to 10 projects a year with seed-money and through special projects such as the recent award of $10,000 for refugee libraries in New Zealand. Children in Crisis provides support for children whose lives have been disrupted through war, civil disorder or natural disaster. The strength of this small-scale funding is the ability to respond to crises as they arise. IBBY’s network provides invaluable support to local organizers who are responding to traumatic events in the lives of children in their countries. The projects are reviewed by an IBBY Executive Sub-Committee and presented at our biannual meetings for distribution of funds. Find out more here: www.ibby.org/awards-activities/activities/ibby-children-in-crisis-fund/.

For other projects and awards, IBBY works largely on a two-year cycle. I am excited to be on the Reading Promotion Jury which will choose two awards in 2020: IBBY’s inaugural iRead Award which recognises outstanding individuals who are working to promote the expansion and development of children’s reading; and the IBBY-Asahi Reading Promotion Award which recognises an organisation’s work on reading promotion. We will review the nominations over the summer before meeting in September and announcing the awards next year.

At a time of ever-increasing political conflict and global catastrophes, the international work of IBBY is as important as ever. I am honoured and grateful to be part of an international team that supports children through reading projects around the world. By the time the EC meets again in September, who knows where we will be, but our international work and commitment will be as strong as ever.