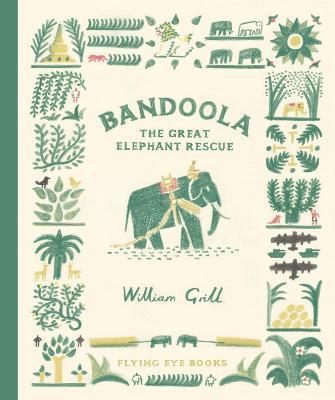 Another triumph from William Grill, in his highly individual illustrative style that has been much celebrated in his earlier two books (Shackleton’s journey, The Wolves of Currumpaw).

Again this is a story of adventure, of humans and the natural world – the true story of ‘Elephant Bill’ and Bandoola, which Grill first discovered in a 1956 Penguin book by J H Williams, aka ‘Elephant Bill’.

The story is set in Myanmar before and during World War 2, and its backdrop is the life of logging elephants and their ‘oozies’ (elephant rider, trainer, keeper) both then and now. Williams spent 25 years living in the forests of what was then Burma working in the teak industry, where he met Bandoola and his oozie Po Toke, and through observation and working together they made radical changes to the way elephants were used and trained. During World War 2, these working elephants were transformed into the Elephant Company, building bridges and paths to assist the British. When threatened with an attack from the Japanese, Williams and Toke led 53 elephants and over 200 refugees to safety on an extraordinary and challenging trek to Northern India, guided always by Bandoola.

Grill tells this story with empathy and respect. He spent time in Myanmar researching the book and this is apparent in both text and illustrations. These vary from glorious double-page spreads to minute images, 15 to a page, or to tiny individual images of elephants and people. The illustrations create a wonderful feeling of the richness and expanse of the forests of Myanmar with a great sense of light at different times of day. It feels very wholistic, with total unity between words and illustrations, with wonderful endpapers and elephant borders, all in a limited colour palette of greens, yellows, reds and white (interestingly the colours of the Myanmar flag). A huge number of facts economically and clearly told, and a great adventure story.