A Sort of Song of Everything: Gatty’s Tale and Music

Our language is an instrument, and many but not all of our better writers have been able to play it to great effect, so that music of their words is part of their meaning.

While it’s no guarantee of success, it can scarcely hurt to become aware of pulse and sound and some of the subtleties of language at an early age. This was true in my own case. My witty mother often read me light verse, and my father, a composer and musicologist, ‘said and sang’ stories to my sister and me as we lay in the half-light on our bunk beds, accompanying himself on his Welsh harp.

Throughout my childhood, too, I attempted to play the piano and viola and to sing, in general without the least distinction. Nevertheless, my musical background must have sharpened my ear, although I’m no great linguist and learn languages other than my own only with difficulty.

Perhaps there’s a compensatory element in the way that much of my writing has involved working with composers (including Bliss and Mathias and Chilcott and LeFanu), or expressly reflecting an interest in music. I don’t know, but it’s certainly true that I’ve regularly written carols, cantatas and even libretti for opera over a number of decades, and no less true that music matters very greatly to some of the characters central to my fiction.

In this short piece, I want to concentrate on my own favourite character, Gatty, and the way in which her book approaches sound and music along different spokes. But first let me just waltz through a few earlier items.

In Wordhoard (1969), co-authored with Jill Paton Walsh, I wrote about the tone-deaf cowherd, Cædmon, and his vision – and throughout my twenties I translated verses from Anglo-Saxon, an oral tradition in which the poet accompanied himself on his lyre. My little trilogy, brought together as Wulf (1988), is full of the music of the monastic offices. For BBC radio, I assembled programmes of work songs and initiation songs. And collaborating with the composer Nicola Lefanu on our two operas, The Green Children (1990) and The Wildman (1995), I began to learn some of the skills of writing libretti.

And so on! Traditional song goes hand in hand with folktale; many kinds of music animate my Arthur trilogy; and halfway-to-heaven songs are instrumental to the discovery of the Waterslain angels! And then there is Heartsong (2015), set in the Ospedale Pieta in Venice, where Vivaldi taught the violin and brought together his renowned orphan choir and orchestra. Jane Ray’s and my central character, Laura, is fulfilled despite her inability to speak by her divine playing of the oboe. This story hints at the power of music in prenatal memory – and turns on the gentle rocking tune that Laura almost thinks she almost knows, and that Vivaldi subsequently used in his Gloria.

I’m not sure that there is much point in pitching one art form against another, but will say that unlike almost every writer I know, music matters more greatly to me than the word. My sense of the world around me is as much a matter of sound as of sight, and the ‘organised’ sound of classical music, ancient and modern, puts me more deeply in touch with my own head and heart, and offers me more ecstasy and consolation than any other art form. 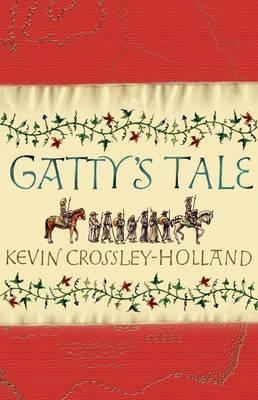 But now Gatty! In preparation for writing this short piece, I’ve reread my novel – the first time I’ve ever revisited a book of mine except to quote from it during some talk – and have been quite startled by just how much musical reference there is in it.

Gatty has a rather disarming way of crooning or humming to herself as she works, and then putting words to her tune. At Caldicot, where she is growing up, the priest Oliver often hears her singing (her voice is a lovely, red-gold contralto) and he tells Sir John that she has the voice of ‘an apprentice angel’. Sir John rubs his nose thoughtfully. ‘I wouldn’t know,’ he says.

It’s not surprising, then, that when Gatty reaches Ewloe before setting off on her momentous pilgrimage to Jerusalem, the choirmaster Everard (who is joining the pilgrimage) starts to teach her to sing.

‘Me and my voice are friends,’ Gatty tells Everard. ‘It keeps me company.’ And then she confides in him that her father didn’t like her to sing, because it reminded him of his dead wife.

Gatty responds to this first lesson by telling Everard to close his eyes, and then singing him the sound of the wind kissing the horn-windows, and the soft cu-ic, cu-ic of the nightjar, and the p’weet, p’weet of a lapwing; and then, right behind him, the sound of a mare, loudly neighing!

That’s to say, Gatty is a girl who hears and sings the music of the green world – a girl who translates what she hears and learns into song. And more besides, as we shall see.

There’s a point when, talking to a Muslim astronomer aboard a boat heading from Venice to Jaffa, Gatty says that her eyes and ears get mixed up, and her nose as well:

I can touch what I smell
And smell what I hear
And hear what I see.
Mongrel-and-jumbled-and-scrambled-and tangled.

So Gatty has a kind of synæsthesia, I suppose – and it enables her, inter alia, to believe she can actually hear the sound of sunlight, and of the wind, and of the stars.

When you or I hear a solo singing voice of great beauty, more especially an upper voice, it can cut us to the quick, and induce hot tears. Why? What is its power? I think it has something to do with innocence. And with memory, perhaps.

When Gatty is stranded in Cyprus, she sings in the half-built monastery of Bellapais in a refectory packed with monks.

‘I don’t know no song about Mary Magdalen,’ she called out, ‘but I know that one about all the saints, flourishing like the lilies, hidden in the clouds.

In the refectory, there was a great stillness. Gatty’s voice was like a scalpel, cutting away the monks’ sins, and it was a balm, healing their wounds.

Time passed outside the door.

Gatty looked around her. She could tell the monks all wanted her to sing more.

‘Audi filia,’ she sang, as Everard had taught her. ‘Listen, my daughter, look.’

The holy men listened, and they looked. One remembered his mother and one fingered his rosary; one thought of the girl he had kissed from top to toe under an olive tree, and one tried to think about God.

The abbot rose to his feet. ‘You have given us fine gifts,’ he said. ‘In your voice, Gatty, we hear the grace of God. Never have I heard a voice as beautiful as yours. I only wish you could stay here. It’s a pity you’re not a boy!’ (p.265)

So Gatty loves melody and she loves song; and in writing her tale, I afforded myself the most wonderful opportunity to show off my own love of language!

The wordplay in the first 11 words of the book point the way, and from there on I did all I could to make the lexicon, and the pulse, and the silences, and the speech rhythms, and the varying tones of the book musical.

At times I went clean over the top, I know! When Gatty reaches the Holy City, for instance, she hears it and sees it not only from A to Z but from Z to A!

Well, why not? What I was trying to do was to capture not only the energy and excitement of the scene, but the way Gatty engaged with it.

I’ve been describing how Gatty translates what she hears and sees into song. But there is a moment when Gatty becomes more than an interpreter. She becomes a maker.

For a long night, she is alone in the heart of the church of Holy Sepulchre – a little Saracen boy has let her stay there against all the rules – and Gatty knows she is blessed. ‘I don’t deserve this. I done nothing in my life. I’ll make it different because of this, all my life, each day of it.’

During the night, Gatty sings. As she tells her solitary companion, Snout the cook, when they are reunited the next day, ‘I sang psalms and that, and songs without words. And a new song . . . I can’t explain. A sort of song of everything’.

‘I mean, I made rock solid and gritty.’

‘I made steps climb and passages twist, I made darkness blind, and candles waxen. I made light shine. In my song, I created them.’ Snout shook his head.

So there it is. Gatty sings to pitch her world. And I write words to tune mine.

Kevin Crossley-Holland is a poet, writer for children, translator and librettist, keenly interested in the traditional tales of north-west Europe. His cycle of poems, Seahenge: A Journey, with remarkable images by Andrew Rafferty, has just been published by Kailpot Press (May 2019), and his next books for children, both to be published by Walker, will be Across the Rainbow Bridge: Five Norse Tales, illustrated by Jeffrey Alan Love, and The Always King, a retelling of Arthurian legends illustrated by Chris Riddell.