A Kid in my Class 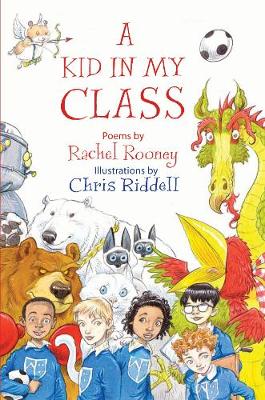 The title says it all – the author dedicates her book to four children and their classmates and the illustrator to the teachers and pupils of a primary school in Hull.

The reverses of the hard cover are filled with sketches of pupils and each poem has a sketch of a pupil or teacher, except the last poem. Rachel Rooney says in her foreword

‘I now think of this book as a class full of people rather than a collection of poems. We’re likely to be a mixture of several of them – and more besides. I can spot myself in a number of these            characters. How about you?’ All readers will empathise with at least one of the characters!

The layout of a double spread is shown below. Further examples are at https://www.otterbarrybooks.com/a-kid-in-my-class. 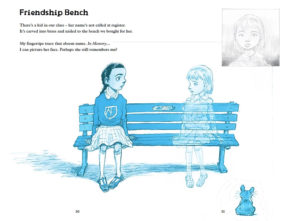 The poem ‘A Girl’ has three verses:

A girl in our class has a faraway look.
Head in the clouds. Nose in a book.
…
Sharpens her pencil. Thinks.
…
She’s over there, in the shade of a tree.
Won’t come down until three.

The illustration shows her sitting on a cloud reading a book, seemly oblivious to everything around her as she reads.
Two verses and a codicil describe a boy in ‘Cool’:

As cool as a cucumber?
No. He’s way cooler than that.…
He thinks he’s minus thirty degrees.
…
He thinks he’s a sub-zero hero. A dude.
A geezer who’s too cool for school uniform.…
Tells me to chill. Thinks he’s it.
Well he’s not.

The illustration here is an arctic scene with a penguin, polar bear and the ‘sub-zero hero’ marching along beside the bear.

The variety of poems is past imagining – the thoughts of a hamster; wondering what present to give a leaving teacher; haikus to describe pop-up ideas, including a ‘her-ku’, twins; school sports day; advice (with a twist) to a new boy; playground life; feeling shy; every aspect of the school day. A wonderful collection to read and quote from in appropriate situations. Chris Riddell’s illustration capture each thought with verve. A book to read over and over again, each time gaining fresh insights into children’s thoughts as the school day wears on.

I am surprised to find this book published as a hardback and not in Otter-Barry’s paperback poetry series. The main difference between this book and the paperback series is that here the cover is in full colour and the main illustrations are in various shades of blue. The children’s faces are feint black and white sketches. In the paperback series no colour is used, but personally I have not found this a drawback.